5 Reasons Why the Pollsters Failed

Some observations on the election results, in no particular order:

1. The asymmetry of the Double Negatives.

One reason polling may have been misleading, or at least misled many of us in the psephology racket, is that this is the first presidential election since random sample polling began in 1935 in which most voters had negative feelings toward both major party candidates.

Election analysts have had experience dealing with elections in which majorities have positive feelings about both nominees; that has usually been the case in contests which turn out to have been seriously contested. “Double positives,” people with positive feelings about both candidates, will usually split along partisan or perhaps ethnic lines, and ordinarily pretty evenly.

The Clinton campaign put more ads on the air in the Omaha market than in Michigan and Wisconsin combined.

But what about “double negatives”? The default assumption most of us have had, I suspect, is that they would split roughly evenly between the candidates. But that didn’t happen this year. According to the exit poll (current figures, which may be slightly revised), 18 percent of voters were “double negatives,” that is, had negative feelings toward both Clinton and Trump. Of these 18 percent, 49 percent voted for Trump and only 29 percent voted for Clinton, with 22 percent saying they picked another candidate or not answering.

The Trump-Clinton split as a percentage of the entire electorate was 9 to 5 percent, a 4 percent margin. Assume that was the split in each target state, rather than the 7 to 7 percent under my default assumption. If you subtract 2 percent from each close state from Trump’s percentage and add it to Clinton’s, you have Clinton carrying Arizona, Florida, Michigan, North Carolina, Pennsylvania and Wisconsin, which have 101 electoral votes. That would give Clinton a 329-209 majority in the Electoral College. As Nate Silver pointed out on FiveThirtyEight.com, that’s a big difference.

In retrospect, observers (and the Clinton campaign!) might have had a better understanding of the election if we had all drilled down and looked more closely at the preferences of the “double negatives.” My hypothesis why they split for Trump: it was a change year, and most “double negatives” wanted change.

The Clinton campaign’s stated goal was to replicate Barack Obama’s 2012 coalition. This was always a dicey strategy: Obama got only 51 percent of the votes. Even taking into account the larger poll numbers for third- and fourth-party candidates in 2016, Clinton was going to have to outperform Obama’s 2012 numbers somewhere to compensate for the fact that she was obviously going to underperform them — as it turned out, underperform them by a wide amount — in some places.

In an excellent Washington Post article, Jim Tankersley points out that in the closing weeks of the campaign, the Clinton campaign put more ads on the air in the Omaha market (aiming, presumably, at the 1 electoral vote of Nebraska 2, since Iowa’s 6 votes were clearly already lost) than in Michigan and Wisconsin combined (26 electoral votes). By one metric, during one period Republicans ran 405 ads in Michigan and 2,319 in Wisconsin while Democrats ran only 31 in Michigan and 255 in Wisconsin. This, despite the fact that the Clinton campaign had lots more money than the Trump campaign.

How many undecided voters or low-propensity-voting Democrats in Pennsylvania even know who Lady Gaga is?

This wasn’t the only example of campaign malpractice. The Clinton campaign spent time and money on winning Arizona and Georgia, and while it performed better there than Obama had, it was not by enough to carry their 11 and 16 electoral votes, respectively. At the same time, Clinton didn’t set foot in Wisconsin (10 electoral votes) after its April 5 primary. In effect, Clinton was aiming for her 340th electoral vote and ignored the need to campaign for her 270th, which is the one that counts.

I don’t know whether there’s any political science study of whether endorsements by show business figures help candidates. My guess is that these days, when practically all entertainers are liberal Democrats or farther left, it doesn’t strike most voters as worthy of any attention when several of them appear for a Democratic candidate like Hillary Clinton. All the more so at a time when the entertainment aimed at universal audiences, like 1930s and 1940s movies and 1950s and 1960s TV, is extinct, and when entertainers appeal only to niche audiences.

How many undecided voters or low-propensity-voting Democrats in Pennsylvania even know who Lady Gaga is? How many are impressed that actors in “The West Wing”, whose last new episode aired in 2006, support Hillary Clinton? I get it that entertainers can draw large audiences, and I get it that Hillary Clinton (to judge from photos) loved these event. But how did they actually help her campaign?

When I was in the polling business working for Peter Hart, in 1974-81, the general rule was that if you had the right message and put more ads on the air than your opponent, you’d win — or at least improve your position. But that was in a day when most Americans had just three or four TV stations to choose from and sat through hundreds of ads a week, and so if you ran the ads you could be sure your message would reach people. We no longer live in such a country.

Pollsters have been altering their techniques in light of the fact that we no longer live in a country with universal landline telephones and a population that answers the phone. The Clinton campaign, however, seems to have operated on the assumption that TV ads remain the main way to communicate with voters.

Democrats tend to be concentrated in a few 80 percent Democratic areas, while Republicans are spread more evenly around the country

I’m not sure that I know a better way, and I don’t know enough about either campaign’s social media efforts to assess them. I understand that the Clinton campaign was faced with an opponent who entered the race as a national celebrity and who during the pre-convention period received more free media coverage, almost all of it positive or neutral, than all the rest of the candidates for both nominations put together. But free media coverage was, quantitatively, about equal after the conventions — and of course far more unfavorable to Trump in so-called Mainstream Media.

If free media was important, then it was a mistake for the Clinton campaign not to hold more public events featuring the candidate. She may have been the first nominee (I don’t know if anyone has done the numbers) to appear at more private fundraisers than in public campaign rallies. One reason for all those fundraisers was to get more money to pay for ads on television — even though technology gives viewers many ways to avoid them these days. Another reason may be that the candidate just loves to spend time with admiring rich people in rooms ready to be photographed for Architectural Digest than she does in often tacky public venues filled with a regrettably large proportion of ordinary people.

5. The narrowness of the Obama Democratic coalition.

The fact that Democratic voters are so clustered, concentrated heavily in central cities, sympathetic suburbs and university towns, has helped its presidential candidates in past elections (this one, not so much) but hurt them in congressional and legislative elections conducted in equal population districts.

Clustering, to oversimplify a bit, means that Democrats tend to be concentrated in a few 80 percent Democratic areas, while Republicans are spread more evenly around the country in districts that average somewhere between 55 and 60 percent Republican. To see the effect, consider the number of Republicans and Democrats elected to the lower houses of state legislatures in what turned out to be the 2016 target states. I cite the lower house, because some such states elected only half or none of their state senators this year; Virginia elected no state legislators except to a couple of vacant seats.

The states are ranked in the order of their percentage margins, starting with the most Republican: 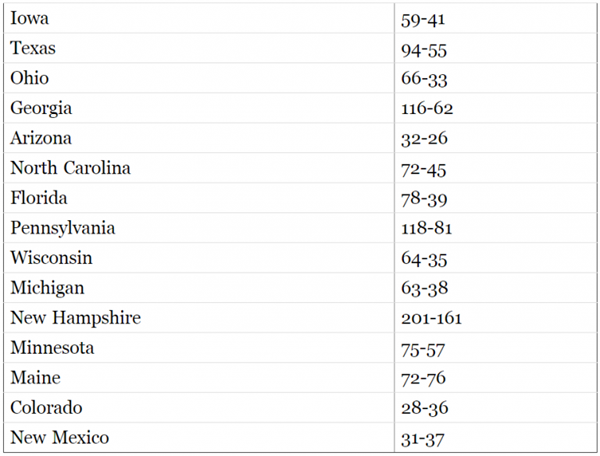 There was lots of straight-ticket voting this year, which accounts for the Democratic edges in the more Democratic states at the bottom of the list. But the bottom line is pretty astonishing, particularly considering that these are states which were, like the nation as a whole, roughly equally divided between the parties at the presidential level. In all, we have (and these figures are subject to slight error) 1,169 Republicans and 822 Democrats: Republicans comprise 59 percent of state legislators elected in closely divided states.

I’ll undoubtedly have more observations as I prowl through the election returns.