Mostly, it's because of politics and misinformation.

It’s a scientifically and mathematically provable fact that all tariffs, at any time and in any country, will harm economic growth, eliminate net jobs, destroy prosperity, and lower the standard of living of the protectionist country because tariffs are guaranteed by the ironclad laws of economics to generate costs to consumers that outweigh the benefits to producers, i.e. tariffs will always impose deadweight losses on the protectionist country (see diagram below, and “An economic analysis of protectionism clearly shows that Trump’s tariffs would make us poorer, not greater“). That is, the reality that tariffs always inflict great economic damage and leave society worse off is not a debatable outcome, rather it’s a provable fact, like the law of gravity. 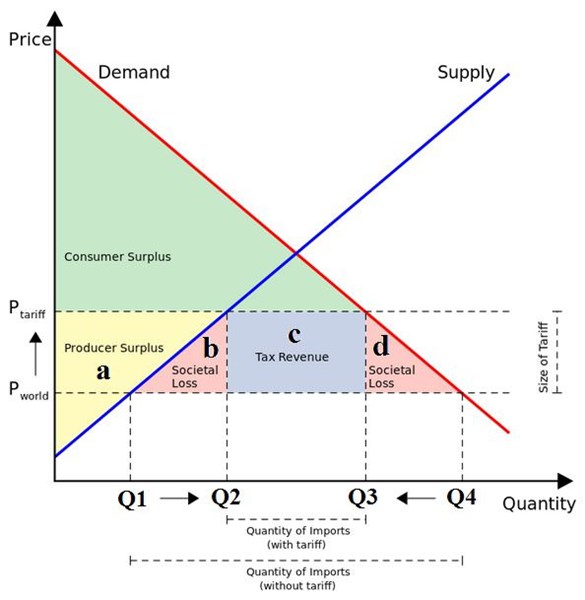 Update: There is plenty of empirical evidence showing that protectionism and tariffs always generate costs to consumers that are far in excess of the benefits to producers (i.e. deadweight costs) see CD posts here, here and here.

So why is protectionism being taken so seriously, and given so much credibility, when it’s actually a job-destroying, prosperity-destroying form of economic suicide and an economic death wish?

Here are my top 25 reasons that explain why protectionism is taken so seriously, despite the fact that it’s guaranteed to impoverish America and destroy jobs, not make us “great again”:

Taken together, the 25 reasons above help us understand the popularity of protectionism, despite the fact that it’s guaranteed to inflict great economic harm. Protectionism is popular primarily for political reasons, not economic reasons. To paraphrase Thomas Sowell, the first lesson of international economics is that free trade makes us better off and protectionism makes us worse off.

The first lesson of politics when it comes to international trade is to ignore the first lesson of international economics, and impose protectionist trade policies when they further the political interests of short-sighted elected officials. When politicians can count on the economic illiteracy of the general public and their blind patriotism to “Buy American,” the political payoffs from protectionism are too tempting to ignore despite the reality that it’s a form of economic suicide.

And because the benefits of tariffs to producers (and jobs created or saved) are concentrated, immediate and visible, while the costs to consumers (and jobs lost) are diffused, delayed and invisible, it’s pretty easy to understand why protectionism is popular, even though the economic costs far outweigh the economic benefits (i.e. deadweight losses result) and it’s therefore ultimately a form of self-inflicted economic poison.