Why There's No Such Thing as an Unregulated Market 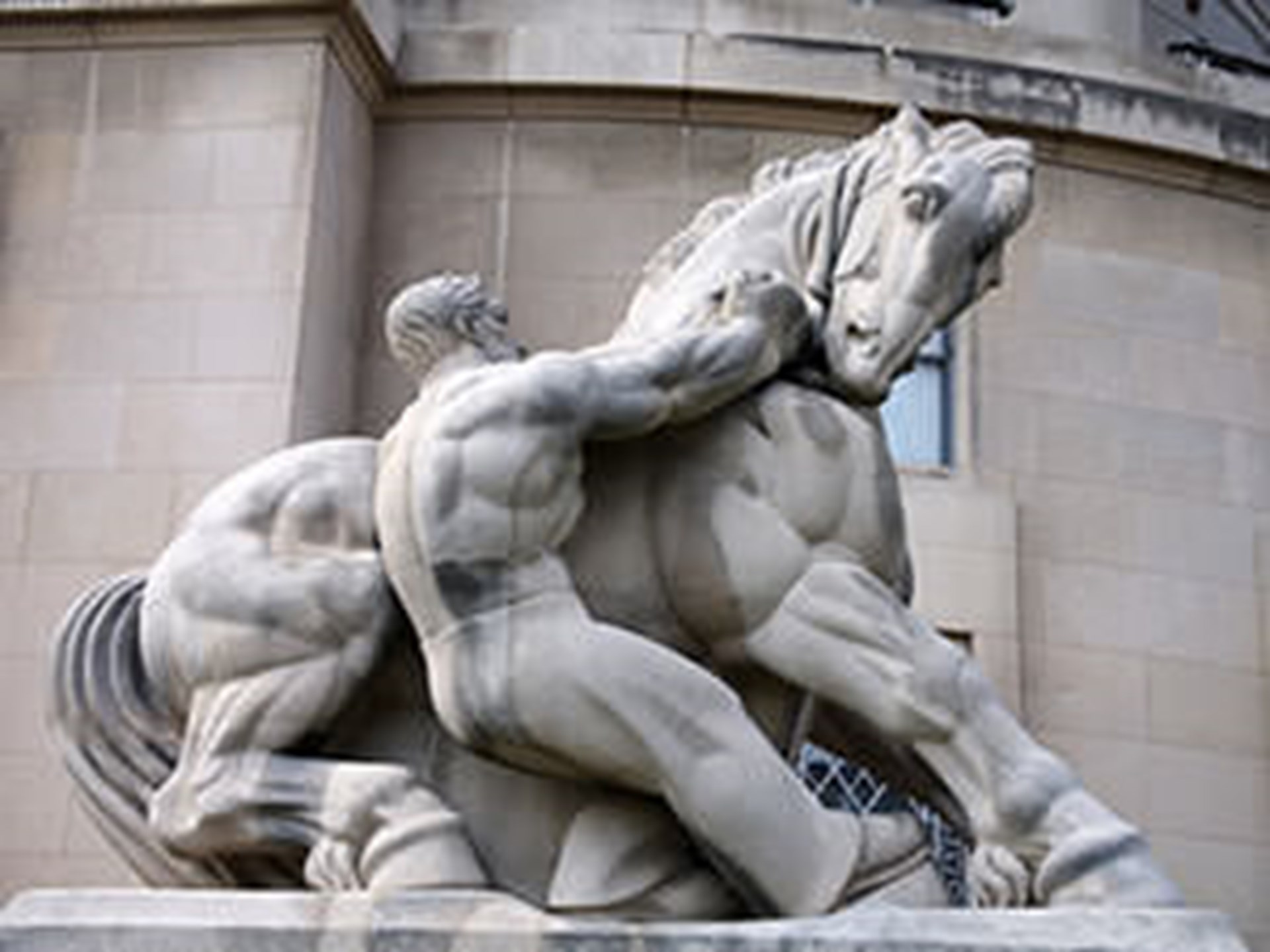 Most people believe that government must regulate the marketplace. The only alternative to a regulated market, the thinking goes, is an unregulated market. On first glance that makes sense. It’s the law of excluded middle. A market is either regulated or it’s not.

Cashing in on the common notion that anything unregulated is bad, advocates of government regulation argue that an unregulated market is to be abhorred. This view is captured by twin sculptures outside the Federal Trade Commission building in Washington, D.C. (One is on the Constitution Ave. side, the other on the Pennsylvania Ave. side.) The sculptures, which won an art contest sponsored by the U.S. government during the New Deal, depict a man using all his strength to keep a wild horse from going on a rampage.

Since trade is not really a wild horse but rather a peaceful and mutually beneficial activity between people, the Roosevelt administration’s propaganda purpose is clear. A more honest title would be “Government Controlling People.” But that would have sounded a little authoritarian even in New Deal America, hence the wild horse metaphor.

Ludwig von Mises and F. A. Hayek pointed out years ago that the real issue regarding economic planning is not: To plan or not to plan? But rather: Who plans (centralized state officials or decentralized private individuals in the market)?

Likewise, the question is not: to regulate or not to regulate. It is, rather, who (or what) regulates?

All markets are regulated. In a free market we all know what would happen if someone charged, say, $100 per apple. He’d sell few apples because someone else would offer to sell them for less or, pending that, consumers would switch to alternative products. “The market” would not permit the seller to successfully charge $100.

And again, in a free market an employer who subjected his employees to perilous conditions without adequately compensating them to their satisfaction for the danger would lose them to competitors.

What regulates the conduct of these people? Market forces. (I keep specifying “in a free market” because in a state-regulated economy, market forces are diminished or suppressed.) Economically speaking, people cannot do whatever they want in a free market because other people are free to counteract them. Just because the government doesn’t stop a seller from charging $100 for an apple doesn’t mean he or she can get that amount. Market forces regulate the seller as strictly as any bureaucrat could—even more so, because a bureaucrat can be bribed. Whom would you have to bribe to be exempt from the law of supply and demand?

It is no matter of indifference whether state operatives or market forces do the regulating. Bureaucrats, who necessarily have limited knowledge and perverse incentives, regulate by threat of physical force. In contrast, market forces operate peacefully through millions of participants, each with intimate knowledge of his or her own personal circumstances, looking out for their own well-being. Bureaucratic regulation is likely to be irrelevant or inimical to what people in the market care about. Not so regulation by market forces.

If this is correct, there can be no unregulated, or unfettered, markets. We use those terms in referring to markets that are unregulated or unfettered by government. As long as we know what we mean, the expressions are unobjectionable.

But not everyone knows what we mean. Someone unfamiliar with the natural regularities of free markets can find the idea of an unregulated economy terrifying. So it behooves market advocates to be capable of articulately explaining the concept of spontaneous market order—that is, order (to use Adam Ferguson’s felicitous phrase) that is the product of human action but not human design. This is counterintuitive, so it takes some patience to explain it.

Order grows from market forces. But where do impersonal market forces come from? These are the result of the nature of human action. Individuals select ends and act to achieve them by adopting suitable means. Since means are scarce and ends are abundant, individuals economize in order to accomplish more rather than less. And they always seek to exchange lower values for higher values (as they see them) and never the other way around. In a world of scarcity tradeoffs are unavoidable, so one aims to trade up rather than down. The result of this and other features of human action and the world at large is what we call market forces. But really, it is just men and women acting rationally in the world.

The natural social order greatly concerned Frederic Bastiat, the nineteenth-century French liberal economist. In Economic Harmonies he analyzed that order, but did not feel he needed to prove its existence—he needed only to point it out. “Habit has so familiarized us with these phenomena that we never notice them until, so to speak, something sharply discordant and abnormal about them forces them to our attention,” he wrote.

…So ingenious, so powerful, then, is the social mechanism that every man, even the humblest, obtains in one day more satisfactions than he could produce for himself in several centuries…. We should be shutting our eyes to the facts if we refused to recognize that society cannot present such complicated combinations in which civil and criminal law play so little part without being subject to a prodigiously ingenious mechanism. This mechanism is the object of study of political economy….

In truth, could all this have happened, could such extraordinary phenomena have occurred, unless there were in society a natural and wise order that operates without our knowledge?

This is the same lesson taught by FEE’s founder, Leonard Read, in I, Pencil.

Most people value order. Chaos is inimical to human flourishing. Thus those who fail to grasp that, as Bastiat’s contemporary Proudhon put it, liberty is not the daughter but the mother of order will be tempted to favor state-imposed order. How ironic, since the state is the greatest creator of disorder of all.

Those of us who understand Bastiat’s teachings realize how urgent it is that others understand them, too.