Your Daily Dose of Government Insanity

Even the world’s freest economies are ranked highly only because there are even worse governments elsewhere.

Since I’m always reading and writing about government policies, both in America and around the world, I’m frequently reminded of H.L. Mencken’s famous observation about the shortcomings of “tolerable” government.

If you take a close look at the world’s freest economies, you quickly learn that they are highly ranked mostly because of the even-worse governments elsewhere.

Even places such as Switzerland have some misguided policies.

But there’s a silver lining to this dark cloud. The incompetence, mendacity, and cronyism that exists all over the world means that I’ll never run out of things to write about.

So let’s enjoy a new edition of Great Moments in Foreign Government.

We’ll start with the utterly predictable failure of an entitlement program in the United Kingdom.

The government must stop ‘nannying’ British parents and do away with universal free childcare, a new report has urged. Families most in need of help are not getting it because Government subsidies are poorly targeted, the Institute of Economic Affairs publication said. Many families on average earnings are spending more than a third of their net income on childcare, the report claimed, saying too much regulation in the sector has hiked prices. …One study has estimated that keeping parents in work costs £65,000 per job, the report claimed, describing current policy as ‘costly and inefficient’. …home-based childminders are priced out of the sector, it said. Co-author of the report Len Shackleton, an editorial research fellow at the Institute of Economic Affairs, said: ‘Government interventions in the childcare sector have resulted in both British families and taxpayers bearing a heavy burden of expensive provision.

Gee, a sector of the economy gets more expensive and inefficient once government gets involved.

Sentient human beings, of course, are not surprised. After all, just look at what government intervention has done for healthcare and higher education.

I’m still waiting for an example of a government “solution” that makes a problem better rather than worse.

Let’s now turn to Germany. I’ve previously referenced the country’s intelligence community because the BND managed to lose the blueprints for its costly new headquarters building.

But apparently the incompetence goes well beyond architecture. Another German intelligence division, the BfV, had an Islamic terrorist on staff. Here are some excerpts from a report in the Washington Post.

German intelligence agents noticed an unusual user in a chat room known as a digital hideout for Islamic militants. The man claimed to be one of them — and said he was a German spy. He was offering to help Islamists infiltrate his agency’s defenses to stage a strike. Agents lured him into a private chat, and he gave away so many details about the spy agency — and his own directives within it to thwart Islamists — that they quickly identified him, arresting the 51-year-old the next day. Only then would the extent of his double life become clear. The German citizen of Spanish descent confessed to secretly converting to Islam in 2014. From there, his story took a stranger turn. Officials ran a check on the online alias he assumed in radical chat rooms.

And they found out that the terrorist had a rather colorful past.

The married father of four had used it before — as recently as 2011 — as his stage name for acting in gay pornographic films. …which could cast a fresh light on the judgment and vetting of the German intelligence agency at a critical time.

These revelations have generated some concern, as one might expect.

News of the case sparked a storm of outrage in Germany, even as critics said it raised serious questions about the country’s bureaucratically named domestic spy agency, known as the Federal Office for the Protection of the Constitution (BfV). …“It’s not only a rather bizarre, but also a quite scary, story that an agency, whose central role it is to engage in counterespionage, hired an Islamist who potentially had access to classified information, who might have even tried to spread Islamist propaganda and to recruit others to let themselves be hired by and possibly launch an attack” against the domestic intelligence agency, said Hans-Christian Ströbele, a member of the Parliamentary Control Committee that oversees the work of the German intelligence services.

You won’t be surprised to learn that the German government is not alone. The U.K. government also has hired terrorists to work in anti-terrorism divisions. 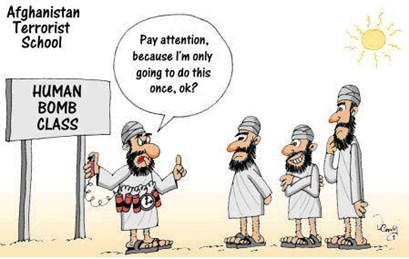 In the United States, by contrast, we import them and give them welfare. I’m not sure which approach is more insane.

The only saving grace is that terrorists sometimes display similar levels of incompetence, as illustrated in the postscripts of this column.

Let’s close with a trip to Canada. Our friends to the north generally are a sensible bunch, but you can find plenty of senseless policies, particularly in the French-speaking areas.

And I’m not sure whether to laugh or cry about this example of bureaucratic extortion.

A Camrose man is ticked about his ticket — a $465 traffic violation issued by Edmonton police — for having a cracked driver’s licence. Dave Balay admits he’s guilty of having a small crack in his licence. But he doesn’t think the penalty fits the crime. He was returning home from visiting a friend Wednesday evening when he was pulled over on Anthony Henday Drive. …He gave the officer his driver’s licence, registration and insurance card. …”He came back, and the younger policeman said he was going to give me a ticket for my driver’s licence being mutilated,” said Balay. “I said, ‘Mutilated? I didn’t even know there was such a thing.’ Then he gave me a ticket for $465.” The mutilation referred to was a crack in the top left corner of Balay’s licence. “Maybe not even quite an inch long,” said Balay, adding the crack doesn’t obstruct any pertinent information. …”I think I outright laughed, and said, ‘Seriously? Four-hundred-and-sixty-five bucks for this crack?’ [The officer] said, ‘It’s a mutilated licence.’ …”Had I scratched out my eyes or drawn a mustache on my face, or scratched out the licence number or something, then, yeah, give me a ticket for that. That should be an offence.”

But the local government says Mr. Balay should be grateful that he was treated with such kindness.

Edmonton police released a statement Friday suggesting the officer actually gave Balay a break. According to the statement, the officer had grounds to lay a careless driving charge, which carries a fine of $543 and six demerit points. But because Balay was co-operative, the officer issued a lesser fine for a cracked driver’s licence.

Though Mr. Balay doesn’t think he’s been given a break.

Balay said he won’t pay the fine, even if that means serving jail time or community service. “I don’t have $465,” he said. “…I do some part-time substitute teaching, supply teacher. It’s a week’s wage.”

Good for Mr. Balay. Hopefully the publicity that he’s getting will force the revenue-hungry bureaucrats in Edmonton to back down.

Meanwhile, this story adds to my ambivalence about Canada. On the minus side of the ledger, there are absurd policies granting special rights to alcoholics, inane harassment of kids selling worms or lemonade, fines on parents who don’t give their kids carbs at lunchtime, and punishment for kids who protect classmates from knife-wielding bullies.

Then again, Canada is now one of the world’s most economically free nations thanks to relatively sensible policies involving spending restraint, corporate tax reform, bank bailouts, regulatory budgeting, the tax treatment of saving, and privatization of air traffic control. Heck, Canada even has one of the lowest levels of welfare spending among developed nations.

Though things are now heading in the wrong direction, which is unfortunate for our northern neighbors.