In his 2008 book, The Return of Depression Economics and the Crisis of 2008, Paul Krugman writes: “The Great Depression in the United States was brought to an end by a massive deficit-financed public works program, known as World War II.”

He has since repeated this bon mot in a number of columns and television appearances. Like Keynes, Krugman lets his fondness for flippant, pithy sayings get in the way of regard for long-run economic prosperity. (Keynes famously remarked that “In the long run we are all dead,” ignoring the fact that in the long run others are alive.)

It is true, as the graph shows, that the country’s gross domestic product rose sharply during the war.

But GDP measures only the total monetary value of production while ignoring what is actually produced. It is just a number, a number that would be no different if consumer goods were produced and sold or if the government set the workforce to making mud pies and then purchased those pies for a like sum. Yet what is produced makes all the difference. The point of an economy is to improve people’s lives by producing goods and services they want and need.

During the war the P in GDP largely consisted of the munitions needed to defeat the Axis powers. While these weapons were necessary to win the war, they did nothing to provide food, clothing, and shelter. Despite all the production increases that came with the war, the American people were materially worse off while it lasted. Some 15 million American men and women, over 10 percent of the population, served in the armed forces. Living, and sometimes dying, in a foxhole was not an improvement over stateside life—even life during the worst of the Depression. Back in the States living standards also dropped (though not as dramatically) as consumer goods, including food and gasoline, were rationed.

Bridges to Nowhere but Recovery?

Krugman, however, is interested in jobs rather than production. He wants the government to spend massive amounts of money and is relatively indifferent as to how the money is spent: “Let the government borrow money and use the funds to finance public investment projects—if possible to good purpose, but that is a secondary consideration—and thereby provide jobs, which will make people more willing to spend, which will generate still more jobs, and so on.”

This indifference is a logical outcome of his belief that the war ended the Great Depression. If, as Krugman thinks, the economy was rescued then by expending huge amounts of resources to build weapons that disappeared overseas, then we would be that much better off now if the government spent a similar amount of resources on things that have even marginal utility—say, bridges to nowhere. If the bridges provide any long-term economic benefit at all, that would just be icing on the cake.

Economically, however, World War II did not spark a recovery so much as it created a financial bubble—not in Internet stocks or housing but in 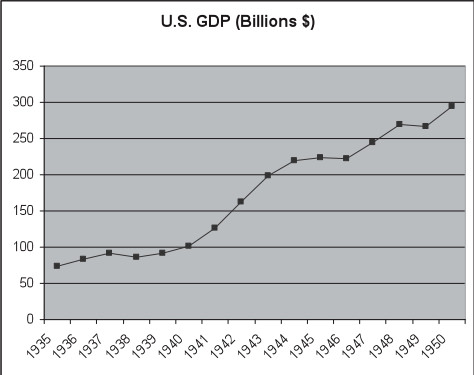 munitions. Once the war was over, the bubble collapsed along with the demand for aircraft carriers and B-17 bombers.

The war’s outbreak necessitated two policy changes, though, that did aid the postwar recovery. First, President Roosevelt stopped his incessant attacks on business. As Amity Shlaes points out in The Forgotten Man, FDR needed big business to produce the tanks, planes, and ships required to defeat Hitler and his allies. Second, he ended his erratic, trial-and-error experimentation. Before the war the stated strategy of FDR and his Brain Trust was to try one program after another until they found something that worked. This resulted in perpetual market churn that made long-term planning and investment especially risky if not impossible. Another result was the creation of myriad tiny, short-lived bubbles. Jobs were created in various locations and in various crafts only to disappear when the government lost interest and shifted its gaze.

Yet Krugman elsewhere prescribes this same strategy of experimentation for today’s financial woes: “The point of all this is to approach the current crisis in the spirit that we’ll do whatever it takes to turn things around; if what has been done so far isn’t enough, do more and do something different, until credit starts to flow and the real economy starts to recover.”

World War II forced Roosevelt to concentrate on a single area of production: weapons. This focus was maintained for the duration of the war and resulted in a sustained economic bubble. Without a similar attention-focusing crisis, however, current government attempts at stimulus will simply result in economic effervescence—tiny bubbles inflating and bursting as the winds of politics shift lawmakers’ attention. Call it the Don Ho School of Economic Thought.

The inability of the Obama administration’s deficit spending to spark economic recovery may be masked for a time by the Fed’s continued expansion of the money supply. Inflation could resurrect the housing bubble, providing a brief uptick in the economy, but such policies cannot be maintained for long.

Contrary to popular belief, the “public works program” known as World War II did not end the Great Depression; it ended the New Deal. The end of the war brought federal spending and tax cuts and the repeal of the Smoot-Hawley tariffs. All these changes combined to pull the nation’s economy out of its long and painful slide, and all could have been made without the war. Similar changes made now could restore the world’s economy without the massive human suffering that, in their absence, is all but inevitable. Inevitable, yet so avoidable and so unnecessary.