Will Brazil take the Venezuelan or Chilean Path?

Noticeably, Brazil is grasping for economic liberty as it starts to realize that government is merely a euphemism for boondoggle.

In her work The Voice of Reason, Ayn Rand once taught that

Capitalism has been called a system of greed—yet it is the system that raised the standard of living of its poorest citizens to heights no collectivist system has ever begun to equal, and no tribal gang can conceive of.

Despite Rand’s efforts to explain the positive impact of capitalism on society, over the years some countries in South America have decided to abandon her lessons and try socialist measures at the expense of their citizens’ wealth.

The whole continent has bet on socialist ideas in recent decades; however, the majority of the South American countries have experienced the failures of this political and economic theory thus far. Nevertheless, among so many socialist economies, one country stood out positively because it was saved by the ideas of the “Chicago Boys.”

They were a group of Chilean students studying economics under the guidance of Milton Friedman and Arnold Harberger. These young economists would lead Chile to a prosperous era known as “the Chilean economic miracle,” which represented a time of unprecedented implementations of free-market ideas and economic growth.

Before this radical economic transformation took place in Chile, the country was haunted by the mistakes of Salvador Allende and his predecessors, who had been governing Chile with excessive state control. When Allende was removed from his presidential position, Chile was suffering the effects of hyperinflation at the rate at 286 percent, government bankruptcy, severe scarcity of basic goods, and the downfall of the country’s economic and political structures.

As a positive outcome of the Chilean free-market revolution, the economy has boomed and become stronger.

In 1974, a coup d’état took place granting Chile’s presidency to Augusto Pinochet. The new military regime decided to allow a group of classical liberal experts to implement free-market ideas and the principles of capitalism and freedom, and for as much as it may sound paradoxical considering those ideas were implemented during a military regime, Pinochet trusted the young classical liberal economists to carry out these laissez-faire policies.

It is important to highlight that even though Chile developed a strong economy, it happened at the cost of great human rights violations, with a plethora of crimes and casualties taking place under Pinochet’s regime (1974-1990).

Despite the chaotic horrors perpetrated by Pinochet, the Chicago Boys managed to develop an economic plan to boost a free market revolution that would bequeath a positive economic outcome to Chileans, booming the economy and making it stronger.

As a positive outcome of the Chilean free-market revolution, the economy has boomed and become stronger. This has made Chile a key example of the power of the free market and capitalism with limited government intervention. The numbers and facts do not lie. Chile’s poverty rate indicates that there has been a major decrease in poverty in the years since 1990. The inflation rate has also gone down drastically, from its highest of 746.3 percent in April of 1974 to only 2 percent in March of 2019. However, the free-market magic did not stop there.

Economic Prosperity as a Result of Freedom

With the privatization of its pension system, Chile started to experience a high level of economic growth and individual prosperity—so much so that today it is the richest country in South America (with the highest GDP per capita), as well as the freest one, among South American countries.

In the aforementioned list of countries, Brazil only ranks higher than its South American neighbor Venezuela (161st), which is second to last of the entire rank. Venezuela is now suffering from the implementation of socialist measures by the dictator Nicolás Maduro. It is an appalling reality that Brazilians live in a country that is closer to Venezuela than it is to Chile in terms of freedom.

Chávez beguiled Venezuelans to believe that government should be in total control and that he would magically sort out all problems.

Freedom comes at the price of responsibility, and not every country is willing to cut government spending, boost austerity, and act within their budget. On the complete opposite political and economic side, with extreme government intervention and a repressive regime based on the maximum restriction of individual’s rights, is Venezuela, a country that was once the richest in South America.

The truth is that Venezuelans voted their way into socialism by electing Hugo Chávez in 1999. As the founder of the Revolutionary Bolivarian Movement, Chávez used populist speech to beguile Venezuelans to believe that the government should be in total control of the economy and that socialism would magically sort out everyone’s problems. A once-thriving nation now a nation of ruin, a direct representation of the consequences of socialism.

Venezuela has, in fact, done the opposite of what Chile did. Chávez enacted laws that aimed at the redistribution of land and wealth with an outright disregard for the right to private property. He confiscated lands and nationalized key energy and telecommunication companies. The oil industry had been nationalized back in the 1970s, but in 1999, Chávez increased the government’s participation in the oil industry. In 2005, he imposed media regulations that destroyed the freedom of the press. After his death in March of 2013, Nicolás Maduro kept on carrying out the socialist utopia that continues to destroy Venezuela.

Prosperity and Poverty Reflected in Graphs

It is possible to find enough data to analyze the progressive decline of Venezuela’s economy, especially when compared to Chile’s economy. For instance, Venezuela’s poverty rate increased significantly from 2009 to 2015. The numbers showed such a catastrophic reality that the Venezuelan government stopped publishing economic statistics in 2015. The graph below shows the ascension of the poverty line in Venezuela over the years:

The next graph shows a comparison of the poverty headcount ratio at national poverty lines among Venezuela, Brazil, and Chile. Unsurprisingly, Chile has done a better job at reducing poverty than Brazil and Venezuela despite the fallacies in South America about free markets and capitalism. 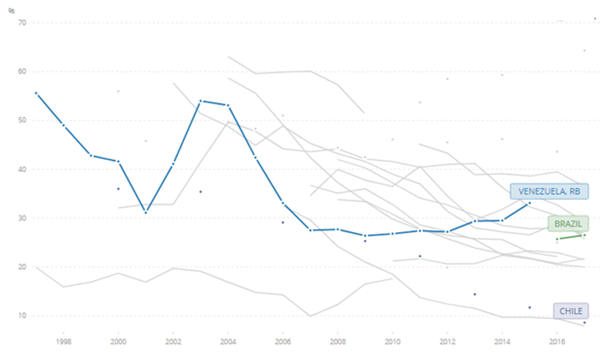 As a consequence of the Venezuelan government’s disastrous political and economic decisions over the decades, Venezuela’s inflation rate also skyrocketed to unprecedented levels, reaching an all-time high of 2,688,670 percent. The graph below shows the inflation rate in chronological order:

The effects of the hyperinflation in Venezuela have been so devastating that Venezuelans need a wheelbarrow of cash to buy bread. In order to give the readers a more accurate idea of how serious the economic situation is, click here for a picture displaying a toilet paper roll next to its price, 2,600,000 in bolivars, Venezuela’s currency, which was the equivalent of 0.40 USD in August of 2018.

The excessive state control in Venezuela has brought a plethora of political, social, and economic results, but the main ones are the epidemic of poverty, the lack of food caused by the scarcity of goods, the disappearance of economic statistics, hyperinflation, government and private sector bankruptcy, government corruption, a lack of medicine, and ultimately, government food subsidies that are not enough to feed the starving population.

An example of the outcomes of such sad socio-economic scenarios is that Venezuelans are now attempting to flee the nation and head to neighbor countries, seeking help to satisfy their most basic human needs. If anything can be said in a comparison between Chile and Venezuela, it is that while free-market ideas boosted Chile’s economy, also improving the lives of Chileans, the socialist measures in Venezuela have brought nothing but scarcity, death, famine, authoritarianism, and outright disrespect for the rights of individuals.

An Opportunity for a New Chapter

Brazil has now started a new chapter in its political history. However, from 2003 to 2016 it was governed by the Workers Party, officially known as “Partido dos Trabalhadores,” a political party that has disseminated the same ideology that was once shared by Hugo Chávez and is now carried out by Nicolás Maduro. As a result, a high economic burden was bequeathed to Brazilians who are now facing higher inflation, a higher unemployment rate, with the highest peak in March of 2017 at 13.7 percent, major government and private enterprises going bankrupt, a pension system operating in deficit, corruption, economic stagnation, and a Supreme Court that seems to serve only the politicians’ will rather than uphold the principles of law.

With enough empirical evidence through analysis of the last 15 years in Brazilian politics, it is axiomatic that the country has been destroyed economically and socially by the socialist ideas that were implemented in the last decades. In a comparison between the 2015 and 2018 Cato Human Freedom Index overall rank, Brazil fell from the 82nd position to the 123rd position in 2018. That has made the nation the second least free country in South America, freer only than Venezuela.

Noticeably, Brazil is grasping for economic liberty as it starts to realize that government is merely a euphemism for boondoggle.

After the political turmoil initiated in 2014 with the Operation “Car Wash,” an investigation that uncovered a web of corruption, Brazil finally took the first steps to move toward a more free market-based economy and a laissez-faire style of politics when it stopped the leftist cycle by electing Jair Bolsonaro, a president who declares himself to be against socialism and left-leaning policies. Brazil has also managed to have its own "Chicago Boys" in the presidential team, with Minister of the Economy Paulo Guedes and many more University of Chicago economic graduates.

Further, Minister Guedes is now trying to approve a pension system reform in Brazil. It would reduce the federal government’s spending on unreasonable pensions for politicians, retired military personnel, and public workers from the judiciary branch. The measure seeks to save Brazilian society billions of dollars and reduce the risk of higher inflation and other negative economic outcomes. A well-balanced pension system will be more likely to attract investors.

Noticeably, Brazil is grasping for economic liberty as it starts to realize that government is merely a euphemism for boondoggle. After witnessing the egregious ubiquity of government’s destructive power in Venezuela’s case and the success of Chile due to free-market ideas, Brazilians should now ask themselves, “What do we truly want?”

Given the socioeconomic comparison between Chile and Venezuela, there should be no doubt about which path to follow in order to become a freer and more prosperous nation.

Brazilian professor and researcher in the interdisciplinary areas of Law, Political Science, and Economics.

Author of the books published in Portuguese and translated as “The right of belonging to yourself” and “Social Security: contemporary reflections on the effectiveness of public policies of inclusion”.