Wild Rhetoric Can Only Escalate the Conflict with North Korea 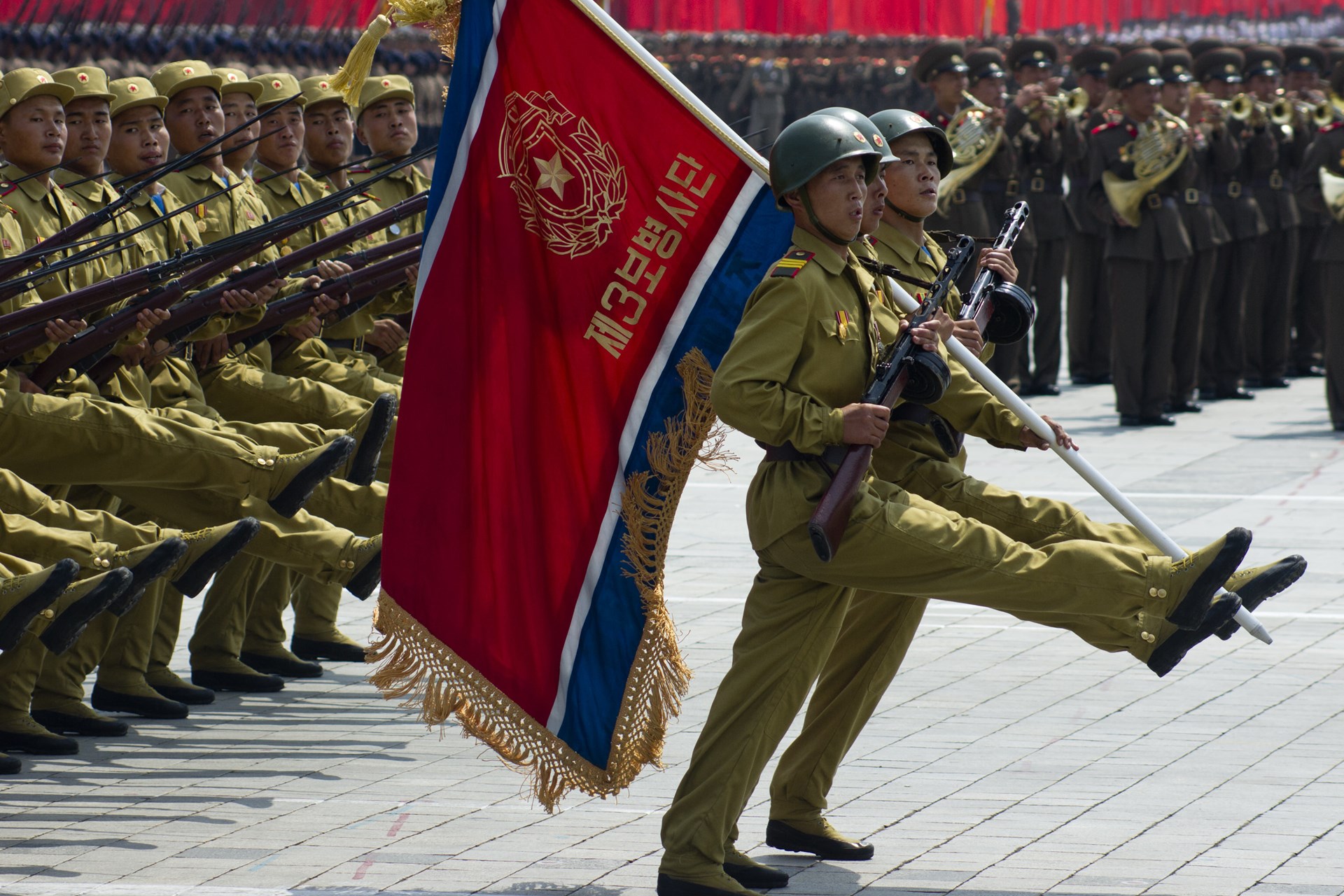 I never expected to have trouble distinguishing the rhetoric of America’s president and North Korea’s leader. Nor did I ever imagine it would be unclear which official was more impulsive, emotional, blustering, and reckless. But these are not normal times.

For anyone contemplating the odds in a war between the U.S. and the Democratic People’s Republic of Korea, a few numbers are instructive. Last year the U.S. had a GDP of almost $19 trillion, roughly 650 times the GDP of the Democratic People’s Republic of Korea. The latter is equivalent to the economy of Portland, Maine or Anchorage, Alaska. America’s population is around 13 times as large as that of the DPRK.

The U.S. military spends upwards of 100 times as much as the North’s armed forces. With the world’s most sophisticated nuclear arsenal and 1411 warheads (the peak was 31,255 50 years ago), Washington could incinerate the North in an instant. Pyongyang is thought to possess around 20 nukes, of uncertain status and deliverability.

Neither Blind Nor Suicidal

Does the DPRK’s “Supreme Leader” Kim Jong-un recognize this reality? There’s plenty of evidence that he is ruthless and cruel. But none that he is blind or suicidal. Like his father and grandfather, who ruled before him, he most assuredly prefers his virgins in this world.

The North’s rhetoric is bombastic, splenetic, confrontational, and fantastic. But it always has been thus. Even before Pyongyang possessed deployable nukes and long-range missiles, it was promising to turn New York (as well as Seoul) into a “lake of fire.” The North Koreans even distributed a video showing precisely that result. If calm ever descends upon the Supreme Leader and his minions, then perhaps Americans should really worry.

The North’s rhetoric and behavior is determined at least in part by domestic considerations. Politics is all-consuming and militaristic images are everywhere. (I visited in June and put up a bunch of photos on Forbes. We are holding a CatoConnects session on Tuesday, August 15 to discuss my visit.) The regime seeks support by portraying itself as heroically defending—against overwhelming odds—a society under siege by imperialistic Americans and their South Korean puppets. The constant mantra, almost irrespective of subject, place, or person, I heard was “under the wise leadership of the Supreme Leader.” Whether the population believed it seemed secondary.

As for Pyongyang’s international interactions, the regime is acting out of weakness. Even North Korean officials, while proudly proclaiming that their nation was prospering despite sanctions, admitted that becoming an “economic power” was an objective, not an accomplished fact. The Victorious Fatherland War Museum displays pictures of the devastation wreaked by U.S. air attacks during the Korean War. Even when it comes to nuclear weapons officials talk of “matching the U.S.,” not outpacing Washington.

Indeed, this helps explain North Korea’s weapons development. Of course, there is nothing good to say about the Kim dynasty, now into its third generation. It runs a totalitarian regime which holds an entire people in bondage. Although state controls are slipping a bit, especially when it comes to the economy, individuals have essentially no civil, political, or religious liberties. Nevertheless, it is important to try to understand the DPRK in order to develop sensible policies.

North Korean elites know Washington’s power. After all, the U.S. intervened to defend the Republic of Korea after the 1950 DPRK invasion and would have liberated the entire peninsula had China not joined the conflict. Gen. Douglas MacArthur then advocated using nuclear weapons, a threat also employed by the incoming Eisenhower administration to “encourage” China to conclude an armistice.

Once that agreement was reached, the U.S. forged a “Mutual Defense” treaty (in practice it runs only one way, of course) with the South and maintained a garrison, backed by nuclear weapons on the peninsula, joint military exercises with the South, and ample supplemental forces nearby. Such measures posed an obvious existential threat to the North Korean regime.

Military strikes would risk triggering the Second Korean War, which could kill tens or hundreds of thousands and result in widespread devastation. The dangers resulting from America’s policies were enhanced by the end of the Cold War, when first Moscow and then Beijing opened diplomatic relations with South Korea. Today the DPRK is truly alone, even as U.S. officials say “all options are on the table”—and the American president threatens “fire and fury.”

Moreover, the Kim regime sees Washington engage in promiscuous military intervention around the globe. American administrations most recently used the armed forces to promote regime change in Afghanistan, Iraq, and Libya. Notably, the government of the latter traded away its nukes and missiles, leaving it vulnerable to outside intervention. North Korean officials are quick to cite these examples.

If there ever was a case of a paranoid state having a real enemy, it is North Korea.

Obviously, anything said by the DPRK should be taken with several grains of salt, but there is little reason to doubt the concerns Pyongyang expresses over potential U.S. military action. When I visited the North in June North Korean officials dismissed criticism of their nuclear program, pointing to America’s “hostile policy,” highlighted by “military threats” and “nuclear threats.”

The DPRK’s nuclear weapons obviously defend against such “threats,” but have other uses as well, such as international status and extortion. Long-range missiles have only one purpose: deterring U.S. military intervention against the North.

The Kims want to avoid, not wage, war with America. If the U.S. was not “over there,” the North’s safest course would be to ignore Washington. But with America already involved and threatening intervention, Pyongyang’s only sure defense is deterrence.

The North is moving to do what no other potential adversary other than China and Russia has done, effectively foreclose the possibility of U.S. military action. Once the Kim regime has a reasonable chance of turning at least a couple of major American cities into “lakes of fire,” would any administration risk even conventional involvement in a Korean conflict?

Indeed, Washington should have turned South Korea’s defense over to Seoul years ago—the South possesses 40 times the GDP and twice the population of the North. Pyongyang’s nuclear ambitions should spur Washington to withdraw from the Korean imbroglio, phasing out both the U.S. treaty guarantee and troop deployment. But even then the DPRK tops the list of regimes that should not possess nukes. And as long as America is involved, the possibility of misjudgment and mistake remains real. Especially with two leaders possibly suffering from impulse control issues.

What to do? Military strikes would risk triggering the Second Korean War, which could kill tens or hundreds of thousands, result in widespread devastation, and spread chaos, instability, and refugees. The war would be in Northeast Asia, “not here in America,” as Sen. Lindsey Graham (R-S.C.) proclaimed, but Americans still would suffer.

Better to lower the regional temperature, in both action and rhetoric; begin phasing out America’s security treaty and military garrison, shifting any Korean military struggle from the U.S. to the peninsula; open a dialogue with the North, especially over security issues; engage China over its interests, encouraging it to more fully cooperate over the North; and develop a regional  development/security package in return for North Korea’s denuclearization, enlisting Beijing as the chief muscle behind an offer impossible to refuse.

Perhaps most important, the U.S. should continue to set as its prime objective supporting peace on the peninsula. That has been America’s objective since the end of the Korean War 64 years ago. That should remain Washington’s goal as it seeks to extricate itself from an outdated military commitment that now threatens to go nuclear.

This piece first appeared at Cato.org