Why We Should Celebrate Profits

Every sale a company makes is a testament that consumers benefitted from the business’ existence.

Different people and cultures throughout history have had different perceptions on the morality of profits.

Professor Deirdre McCloskey deserves special praise for her study on how people in some European countries during the 17th and 18th centuries began to view entrepreneurs and inventors as morally honored occupations, and how this new perception caused an extraordinary improvement in the living standards of people in those countries, and later around the world.

Nevertheless, profit-seeking continues to be charged as one of the evils in society.

Considering this paradox, it is natural to ask ourselves what exactly profit is in the first place. And then, from there, try to find out whether profits do good or harm to society.

Where Revenue Comes From

It is conventional wisdom that a company’s profit is the difference between (a) the money received from everything it sold and (b) all the money it spent. The profit is precisely what is left after the subtraction between these two sums, what comes in and what goes out. Now let’s look at each of them from an economics perspective. 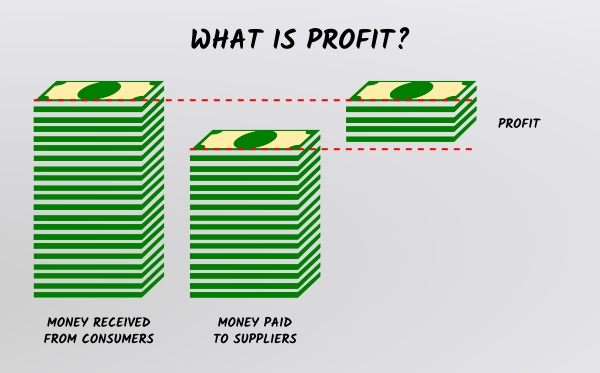 A company’s sales revenue is all the money it received from its customers in exchange for its products. Every penny that adds up to its revenue was received from somebody who judged they would be better off with this product than with the money it was being charged for.

Sam Walton, the founder of retail giant Wal-Mart, used to say that all it took for him to lose his fortune was people to stop buying at his stores. All his wealth (he was the wealthiest man in the US in the 80’s) was acquired, each and every dollar, from people who walked into one of his stores, picked an item from the shelf, headed to the counter, and exchanged a certain amount of dollars for the benefit of taking that item home.

If it were not for Walton, each of those millions of people would have had to settle for the next best option in order to supply the need or desire that brought them to that purchase. Maybe an inferior brand in the shop next door, or a shop further away from home, or perhaps a higher price. But something made each and every one of them choose to buy at that store, and from that, we deduce that Walton contributed to the betterment of their lives by offering an option that was more beneficial than the ones available. 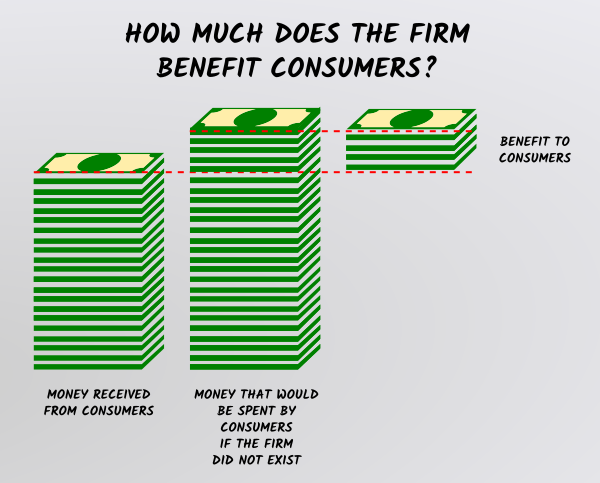 Included in the sales revenue are also costs. A company can only sell if they exchange their money for raw materials, labor, rent, electricity, freight etc. Each one of these costs is not an end in itself, but a means to make possible the company’s business. For the company, they are all inputs and they all (and so many others we could have added to the list) make up the amount that will be discounted from the revenues in order to calculate the profit.

The Benefits of a New Business

Let’s begin with labor. In order to carry out its operations, a company needs to hire unemployed workers and/or offer better jobs to employed workers. A better job could be one with a higher wage, closer to home, a shorter shift, or something similar. When we look at any business (a shop, a restaurant, a factory etc), we can be sure that it had to offer to each and every one of its workers a job that they themselves considered to be better than any alternative they had at the moment. Otherwise, they would not be there.

Any other input that the company acquires, from raw materials to electricity, is bought from another company that will also need to hire in order to attend to the new, additional demand, sparking an identical effect as described above. And these, in turn, will also have their own suppliers. So that effect will ripple through the entire production chain, causing benefits to innumerous workers with better wages and/or working conditions down until the fundamental input of any production, the human labor itself. 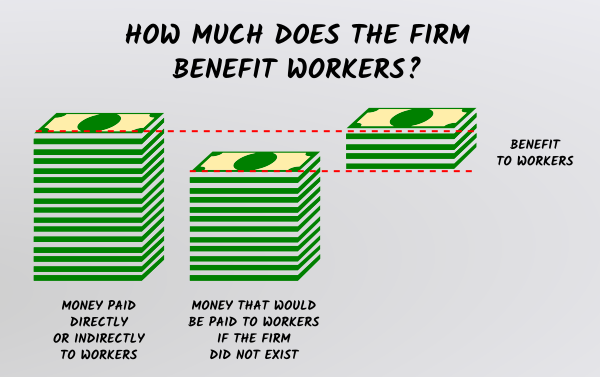 So, gathering up all that we have seen this far, every sale a company makes is a testament that consumers benefitted from the business’ existence; every purchase a company makes is a testament that the workers who made those sales possible have also benefited from the business’ existence. In other words, we see that every business, through voluntary exchanges, diffuses benefits to society. But there is a particularity about profitable firms that we haven’t yet explored.

As said above, a profitable business is that for which the sum of sales revenue is greater than the sum of purchase expenditures. With everything we saw thereafter, what does this mean?

If, because of the business, (a) consumers are paying less (or some other benefit) for their products, (b) workers are earning more (or some other benefit) for their work, and (c) there is still some money left for the entrepreneur, that necessarily implies that before the new business was founded, workers were earning less for their work than consumers were paying for that work. If otherwise, workers were earning more than the consumers were paying, someone who wanted to hire them to produce something and then sell it to consumers would have a loss. 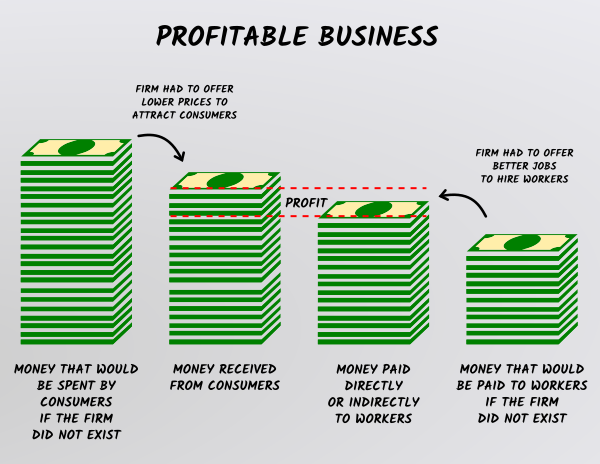 Let’s see one example to make it clear. Suppose an entrepreneur is considering hiring neurosurgeons to sell sand at the beach. Why would this business likely turn a loss?

Common sense would say: “Because it’s a stupid idea.” An economist, however, would respond with something like: “Because the price that people at the beach would be willing to pay for sand is likely to be lower than the wage that would convince neurosurgeons to give up their offices.” In other words, people at the beach don’t need sand! And neurosurgeons do not get paid that poorly! 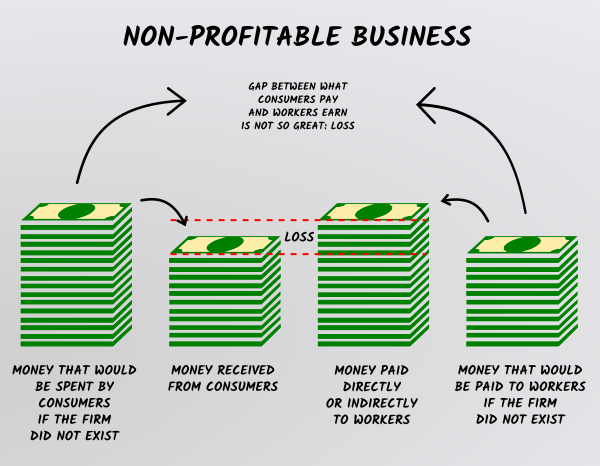 The profitable business is, therefore, the business for which we can rest assured not only that it is benefitting others, but also that it is benefitting those who need it. Profit is the unfalsifiable testimony that its holder managed to find people who were paying too much in products made by workers, who in turn were earning too little. And there is more. The higher the profit made, (a) the lower the workers’ wages relative to the price paid by the consumer were, and/or (b) the larger was the number of transactions that benefitted all these people. Or in the words of Robert Murphy, “to bemoan a capitalist earning high profits is like complaining about a surgeon saving too many lives.”

By looking at these two examples, it may seem easy to spot profitable opportunities. But then what do you believe is lacking in your neighborhood? A new gym? A grocery store? A pet shop? Would you put your money into it?

Great inventors and businessmen became multibillionaires with their businesses, but have you ever stopped to wonder how the world would be without personal computers, for instance? Theodore Dalrymple clarifies that although his wealth is only a tiny fraction of that of Bill Gates, it is certainly greater than it would be had Gates not founded Microsoft. The same is true for everyone. We all benefit from the entrepreneurial effort that gave him his wealth.

And that benefit is not limited to each of us using our own computers. Imagine a world where every grocery store kept their inventories in paper. Wouldn’t management be a lot more laborious and erratic? Wouldn’t this cost be passed on to food prices? Wouldn’t this have a decisive impact on the lives of billions of people besides Gates? Now imagine the same thing for all the products that have been profitable in history. Don’t they add benefits to society?

When we stop to think about it, profit is already the entrepreneur’s fair share of the benefits they created for society. And yet, when an entrepreneur decides to open their own business, they hardly do it specifically for the benefit of others. They do it to meet their own interest, like the bees that seek nectar in the flowers and thereby pollinate nature. Adam Smith knew this by 1776:

When bees collect nectar from 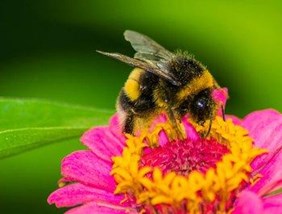 flower to flower, they have no intention of spreading pollen through nature. But does it matter?

[The individual] neither intends to promote the public interest, nor knows how much he is promoting it. […] And by directing that industry in such a manner as its produce may be of the greatest value, he intends only his own gain. He is in this, as in many other cases, led by an invisible hand to promote an end which was no part of his intention.

One of the fundamental differences between communism and liberalism is that the former has as a precondition the transformation of human nature: People need to stop acting to satisfy their own individual interests and need to start acting to meet the collective interests of society (“To build communism it is necessary, simultaneous with the new material foundations, to build the new man and woman.” – Che Guevara). Tens of millions of people died from violence or starvation during attempts to carry out that transformation, usually through socialism. To this day, many people believe that it is at least in part necessary for a better world.

Liberalism suggests an easier and less painful path. Instead of seeing self-interest as something to be cured, it employs it as the fuel of a process that diffusely enhances people’s living standards. That process is entrepreneurship.

And with this, we circle back to the beginning of the article. Societies that praise entrepreneurs are more prosperous. Let people want to be rich, let them want to collect luxury boats, light up their cigars with money, go visit the moon. If they can’t steal from others (that includes cronyism), they can only have all those things if they manage to help other people – precisely those who most need it.

We are finally ready to answer the starting question, but I’ll do it with yet another question: What harm is there in promoting the well-being of those who most need it?

Felipe Lungov is an economist and President of Academia Liberalismo Econômico in Brazil.