Why Liberalism Desperately Needs a Restatement

We’ve got to roll the damn rock back up the damn hill.

For my money, Friedrich Hayek’s The Constitution of Liberty is the 20th century’s greatest statement of the liberal creed. It was not written as an attempt to shift paradigms or blaze trails in political thought. It was a bid to articulate, organize, and refresh the principles and policies already implicit in real liberal government at its best, and to demonstrate the moral authority and practical efficacy of liberalism in response to the calamitous ascent of authoritarian nationalism and communism. Hayek liked to say, with an excess of modesty, that he was simply “restating” liberalism for his time. It generally goes unnoticed that the first paragraph of The Constitution of Liberty in effect argues that if liberalism is going to survive in our time, we must restate it, too. The problem is… we haven’t.

If old truths are to retain their hold on men’s minds, they must be restated in the language and concepts of successive generations. What at one time are their most effective expressions gradually become so worn with use that they cease to carry a definite meaning. The underlying ideas may be as valid as ever, but the words, even when they refer to problems that are still with us, no longer convey the same conviction; the arguments do not move in a context familiar to us; and they rarely give us direct answers to the questions we are asking. This may be inevitable because no statement of an ideal that is likely to sway men’s minds can be complete: it must be adapted to a given climate of opinion, presuppose much that is accepted by all men of the time, and illustrate general principles in terms of issues with which they are concerned.

Hayek is saying that his big book restating some “old truths” was necessary in 1959 because making the case for liberalism is a Sisyphean task. If the old truths are not updated for each new age, they will slip from our grasp and lose our allegiance. The terms in which those truths have been couched will become hollow, potted mottoes, will fail to galvanize, inspire, and move us. The old truths will remain truths, but they’ll be dismissed and neglected as mere dogma, noise. And the liberal, open society will again face a crisis of faith.

What would a crisis of liberalism look like today? 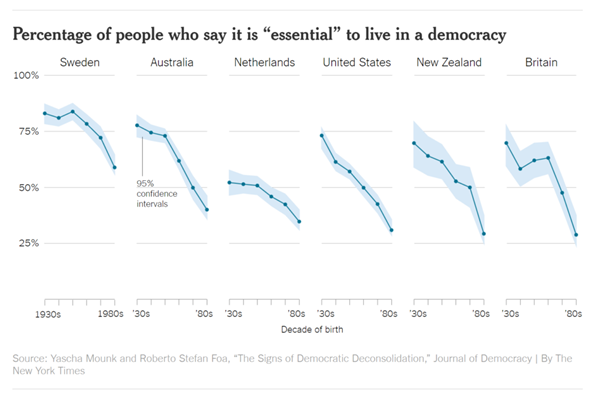 This is what happens when you allow the cultural infrastructure of liberalism to get run down.

Fascism and communism arose in liberal Europe because the liberal elites got complacent.

Hayek warned us. Intellectual and moral infrastructure depreciates. There are ongoing costs of maintenance. You can’t successfully defend liberalism once and for all, just like you can’t install a sewage system and flush happily ever after without giving it another thought.

A liberal social order requires a favorable intellectual and moral climate—a supporting cultural infrastructure. But liberal norms and institutions are under constant corrosive pressure from natural, deep-seated illiberal tendencies that we’ve only recently managed to suppress and/or harness at all. These latent atavistic instincts cannot be effectively neutralized in general or in advance because they constantly find expression in novel, unpredictably powerful guises as our culture, economy, and technology evolves. If we fail to constantly refurbish the case for and commitment to liberalism, reinforcing it against the specific damage of the age, our institutions will drift toward generalized opportunistic corruption and declining popular legitimacy. Our culture will drift toward defensive avidity and mutual distrust. Our politics will drift toward primal zero-sum tribal conflict. All of which creates a fat political opening for would-be despots and ends-justifies-the-means zealots. Fascism and communism arose in liberal Europe because the liberal elites got complacent, nobody fixed the pipes, and then awful people with awful ideas rose to power promising to fix damage—and then caused massively more damage.

Well, how are our pipes looking? Not so good. Commitment to liberal ideals and institutions is slipping around the world. It’s happening in Great Britain, in Hungary, in Poland, in Turkey, in the Philippines. Illiberal nationalist leaders and parties are on the rise in traditional bastions of liberty, such as France, the Netherlands, and in these United States. That means it’s time—way past time, really—to restate the truths of liberalism for the era of Uber, Celebrity Apprentice, Twitter, Telemundo, terror panic, and type-2 diabetes. We’ve got to fix the pipes and patch the potholes, update from copper to fiber. We’ve got to roll the damn rock back up the damn hill.

That’s why we at the Niskanen Center are digging in our heels and putting our backs into the restatement, revitalization, and defense of the ideals and institutions of the open, liberal, democratic, cosmopolitan, commercial society in the age of Brexit and Trump. This means we’ll be weighing in a lot more on the tent-pole principles of liberalism—the rule of law, freedom of conscience, toleration and mutual accommodation, limited government, economic freedom, separation of powers, free speech, the value of truth, etc. And we’re enlisting some great minds and great writers to help us make the strongest possible case for the norms and institutions of liberty in sophisticated, fresh, and accessible terms. Jacob Levy’s illuminating post on the authoritarian perils of post-truth politics is the first sally in our campaign.

Happily, a great deal is understood about how the liberal political order works, and why it merits our allegiance.

This won’t be an exercise in narrowly sectarian ideology or political dogma. It can’t be. The fact that liberalism has become rote is central to our problem. Academic left-liberalism is doggedly utopian—and stale. Democratic Party liberalism is incoherent—and stale. Orthodox libertarianism is dogmatically blinkered—and stale. The “classical liberalism” of conservative-libertarian fusionism is phony—and stale. Each of our legacy liberalisms is, in its own way, corrupt. It’s all part of our pitted, pocked, cracked and creaking liberal cultural infrastructure. It doesn’t help to replace rotten wood with rotten wood, rusty pipe with rusty pipe. Hayek himself told us we can’t fix it with Hayek.

An effective defense of the open society must begin with an empirically-minded account of its complex inner workings and its surpassing value. Liberal political order is humanity’s greatest achievement. That may sound like hype, but it’s the cold, hard truth. The liberal state, and the global traffic of goods, people, and ideas that it has enabled has led to the greatest era of peace in history, to new horizons of practical knowledge, health, wealth, longevity, and equality, and massive decline in desperate poverty and needless suffering. It’s clearer than ever that the multicultural, liberal-democratic, capitalist welfare state is far-and-away the best humanity has ever done. But people don’t know this! We are dangerously oblivious to the nature of our freedom and good fortune, and seem poised to snatch defeat from the jaws of victory. Happily, a great deal is understood about how the liberal political order works, and why it merits our allegiance. The task, then, is to fuse our accumulated wisdom with the best contemporary research in a campaign to restate and defend the old truths of liberalism in inspiring terms for an imperiled new era.

It may sound like hype to say that the stakes couldn’t be higher. But that, too, is the cold, hard truth.

Republished from the Niskanen Center.