Americans are voting with their feet by moving to states where the politicians are taking less of their income.

Photo by Alex Kotliarskyi on Unsplash

When I wrote a few days ago that the Trump tax reform was generating good results, I probably should have specified that some parts of the country are not enjoying as much growth because of bad state tax policy. 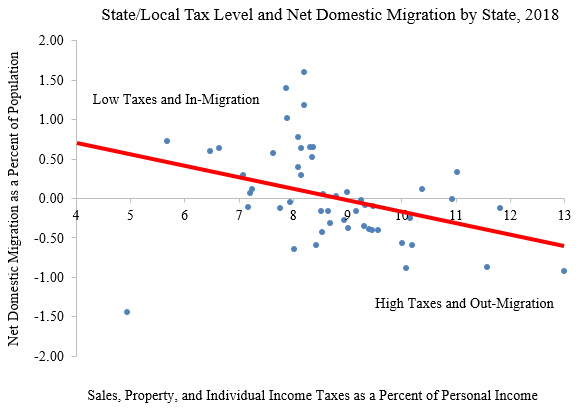 As illustrated by my columns about Texas vs California and Florida vs New York, high-tax states are economic laggards compared to low-tax states.

This presumably helps to explain why Americans are voting with their feet by moving to states where the politicians are (at least in practice) less greedy.

Let’s look at some new evidence on the interaction of federal and state tax policy.

Writing for Forbes, Chuck DeVore of the Texas Public Policy Foundation shares data on how and why lower-tax states are out-performing higher-tax states.

Job growth has been running 80% stronger in low-tax states than in high-tax states since the passage of the Tax Cuts and Jobs Act of 2017 in December 2017. Understanding why holds important lessons for policy, economics, and politics. The new tax law scaled back the federal subsidy for high state and local taxes.

…As a result of limiting the SALT deduction to $10,000, income tax filers in high-tax states saw a relatively smaller tax cut, losing out on about $84 billion since the tax code was changed. With $84 billion less to invest, the pace of job creation in the 23 high-tax states has slowed relative to the low-tax states, with the data suggesting a shift of almost 400,000 private sector jobs may have occurred.

Here are some of his numbers.

Prior to the tax reform’s enactment, annualized private sector job growth was 1.9% in the low-tax states from January 2016 to December 2017 compared to 1.4% in the high-tax states, giving the low-tax jurisdictions a comparatively modest advantage of 35% more rapid job growth over the 23-month period. Now, 17 months of federal jobs data suggest that the Tax Cuts and Jobs Act has increased the competitive advantage of 27 low-tax states where the average SALT deduction was under $10,000 in 2016 as compared to 23 high-tax taxes with average SALT deductions greater than $10,000.

Private sector job growth is now running 80% faster in the low-tax states, 2% annualized compared to 1.1%, up from just a 35% advantage in the prior 23 months. …For California, the lost employment opportunity adds up to 153,000 positions since December 2017… New York’s employment growth was about 128,000 less than might have been the case had the SALT deduction not been capped.

And here’s his data-rich chart. 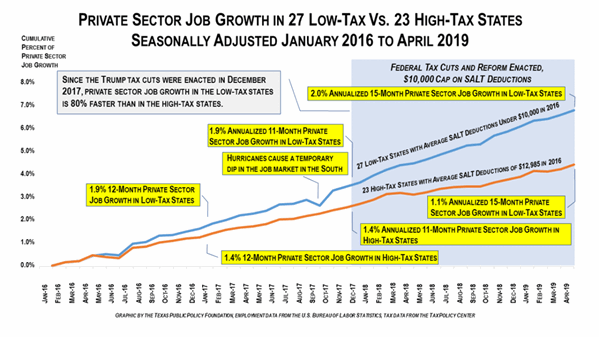 Based on previous evidence we’ve examined, these numbers are hardly a surprise.

Chuck suggests the right way for high-tax states to respond.

…if political leaders in states accustomed to taxing and spending far more than their more frugal peers wish to participate in higher rates of job creation, they should reform their own fiscal houses, rather than expect their neighbors to subsidize their high-spending ways.

Sadly, this doesn’t appear to be happening.

Politicians in high-tax states such as Illinois and New Jersey are trying to make their already-punitive systems even worse.

Based on what we’ve seen from Greece, that won’t end well.