Why Isn't Rent in Tokyo Out of Control?

Housing prices in Tokyo have barely changed in twenty years; in San Francisco, they're up 230%.

Tokyo, Japan’s capital city, has a growing population of over 13 million people, but house prices have hardly increased in twenty years. Why? Tokyo has a laissez-faire approach to land use that allows lots of construction, subject to only a few general national regulations.

Robin Harding at the Financial Times has a very important piece on the Tokyo system:

Tokyo’s steady construction is linked to a still more startling fact. In contrast to the enormous house price booms that have distorted western cities — setting young against old, redistributing wealth to the already wealthy, and denying others the chance to move to where the good jobs are — the cost of property in Japan’s capital has hardly budged.

This is not the result of a falling population. Japan has experienced the same “return to the city” wave as other nations. 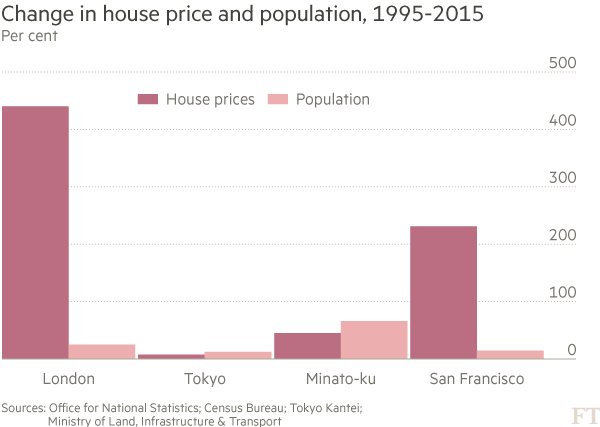 How is this possible?

First, Japan has a history of strong property rights in land:

Japan’s constitution declares the right to property is “inviolable.”

Subject to the zoning rules, the rights of landowners are strong. In fact, Japan’s constitution declares that “the right to own or to hold property is inviolable.”

A private developer cannot make you sell land; a local government cannot stop you using it. If you want to build a mock-Gothic castle faced in pink seashells, that is your business.

But this alone cannot explain everything, because there was a huge property price-boom in Japan circa 1986 to 1991. In fact, it was in dealing with the collapse of that boom that Japan cleaned up its system, reducing regulation and speeding the permit approval process.

In the 1990s, the government relaxed development rules, culminating in the Urban Renaissance Law of 2002, which made it easier to rezone land. Office sites were repurposed for new housing.

“To help the economy recover from the bubble, the country eased regulation on urban development,” says Ichikawa. “If it hadn’t been for the bubble, Tokyo would be in the same situation as London or San Francisco.”

Hallways and public areas were excluded from the calculated size of apartment buildings, letting them grow much higher within existing zoning, while a proposal now under debate would allow owners to rebuild bigger if they knock down blocks built to old earthquake standards.

The policy choices were made — they can be unmade.