Why Is the GOP Boosting Food Stamp Bureaucracy?

The GOP farm bill needs some real cuts—both to farm subsidies and to food stamps.

The Republicans have so forgotten how to control spending, even when they try something conservative it is not really conservative. Consider the House GOP’s proposed reforms to the food stamp program in the upcoming farm bill.

Starting in 2021 certain SNAP recipients must either be employed or in a state-government-sponsored training program unless they qualify for certain waivers. CBO estimates that this provision would reduce spending on benefits by $9.2 billion over the 2019-2028 period because it would cause some people to lose eligibility.”

That sounds like a good change, and change is needed in this program. Spending on food stamps doubled under President Bush then doubled again under President Obama, as shown in the chart below. It rose from $18 billion in 2001 to $80 billion in 2013. It has since dipped to $68 billion, but we are in the ninth year of an economic expansion so it should have fallen much more.

There are no net taxpayer savings from the Republican food stamp plan.

Anyway, the GOP bill would trim food stamps $9.2 billion over 10 years, or less than $1 billion a year. But here is the next line in the CBO report: “The federal government’s administrative costs for this provision would increase by $7.7 billion over the same period.”

The GOP plan would blow most of the cost savings on new bureaucracy! The rest of the savings would be consumed by other spending increases, according to the CBO. The scorekeeping agency finds that the plan would create an overall increase on food stamp spending over 10 years of $0.5 billion.

There are no net taxpayer savings from the Republican food stamp plan. Democratic Representative Colin Peterson said of the plan, “It mystifies me how the party that doesn’t like government wants to make it so much bigger.” Me too! Except, as I discuss here, most Republicans like government and want to make it bigger.

The proposed food stamp changes may induce some people to get jobs and job training, but federal job training programs have a poor record. Also, what the GOP envisions as $1 billion a year in spending on food-stamp job training, liberals are already pushing to make $4 or $5 billion.

The GOP farm bill needs some real cuts—both to farm subsidies and to food stamps.

The GOP food stamp changes would shuffle the deck chairs, but the CBO finds that the reduction in government dependence would be relatively tiny. By 2028, “the SNAP caseload under the bill’s proposed work requirement would be lower by about 1.2 million people in an average month than it is under current law, or about 3.7 percent of the total caseload.”

The GOP farm bill needs some real cuts—both to farm subsidies and to food stamps. Real cuts are the topic of this farm study and the focus of this Friday forum on Capitol Hill. As for food stamps, a good start would be to cut $15 billion on junk food. 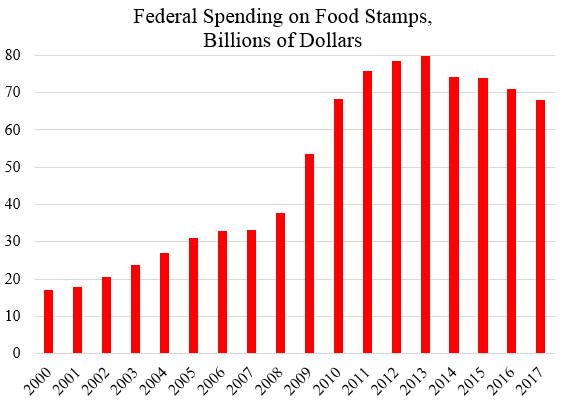