Simon was right then, and he continues to be right today.

Last month, many Americans will have celebrated the birth of George Washington, Abraham Lincoln, and Ronald Reagan. Few, unfortunately, recalled the birthday of a relatively little-known US academic, Julian Simon. The University of Maryland professor, who died in 1998, would have been 86. That’s an unfortunate oversight, for Simon was a truly original thinker and author of The Ultimate Resource—surely one of the most contrarian books ever published.

In the book, Simon dismissed the widely held belief that population growth must inevitably result in poverty and famine. Unlike other animals, he argued, humans innovate their way out of scarcity by increasing the supply of natural resources or developing substitutes for overused resources. Human ingenuity, in other words, is “the ultimate resource” that makes all other resources more plentiful.

Simon’s conclusions and forecasts were based on meticulous research, facts, and a deep understanding of human nature, intelligence, and creativity. They put him at odds with the doomsayers of his day, such as Paul Ehrlich of Stanford University, whose best-selling 1968 book The Population Bomb argued that over-population would lead to the exhaustion of natural resources and mega-famines. As one of us wrote on these pages over a year ago, the two thinkers agreed to put their ideas to the test.

“In October 1980, Ehrlich and Simon drew up a futures contract obligating Simon to sell Ehrlich the same quantities that could be purchased for $1,000 of five metals (copper, chromium, nickel, tin, and tungsten) ten years later at inflation-adjusted 1980 prices. If the combined prices rose above $1,000, Simon would pay the difference. If they fell below $1,000, Ehrlich would pay Simon the difference. Ehrlich mailed Simon a check for $576.07 in October 1990… The price of the basket of metals chosen by Ehrlich and his cohorts had fallen by more than 50 percent.”

The Data Is In

The Cato Institute in Washington, D.C., has recently published an update to the Simon story. It looked at population, prices, and income from 1960 to 2016. Over these 56 years, world population increased by 145 percent, from 3 billion to almost 7.5 billion. Yet, inflation-adjusted gross domestic product (GDP) per person increased by 183 percent, from $3,689 to $10,391. So, income grew 26 percent faster than population—just as Simon had predicted.

What about natural resources? After all, as people grow richer, they consume more stuff. The study looked at prices of 42 natural resources from 1960 to 2016, as tracked by the World Bank. Adjusted for inflation, 19 declined in price, while 23 increased in price. Out of those 23 commodities, only three (crude oil, gold, and silver) appreciated more than GDP per person. Put differently, GDP per person grew faster than 92 percent of the commodities measured.

The overall inflation-adjusted price index of the 42 commodities increased by 33 percent over the 56-year period. However, after adjusting for the appreciation in GDP per person, commodity prices fell by 53 percent. Humanity is creating faster than it is consuming. That is an astonishing verification of Simon’s prophecy. 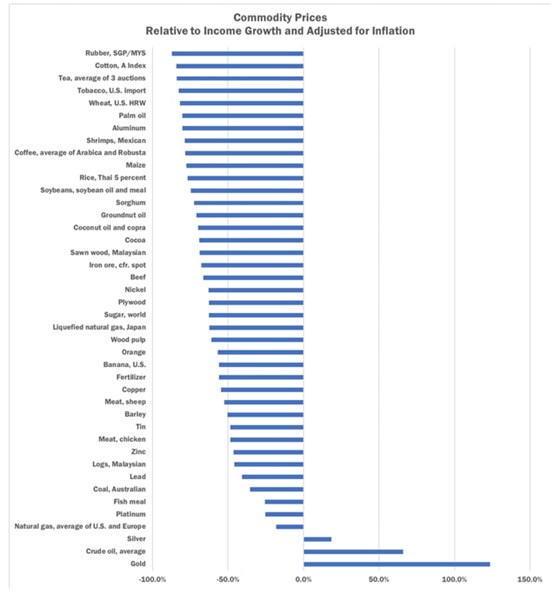 In America, both parties grumble about globalization. China, they say, has pocketed the lion's share of the benefits from free trade. And it is true that China has benefited. The Chinese GDP per person went from $192 in 1960 to $6,894 in 2016, an inflation-adjusted increase of 3,494 percent. But, American GDP per person grew from $17,036 to $52,194—an increase of 206.3 percent. That’s 13.6 percent faster than the global average. That’s not growth that should be sneered at. 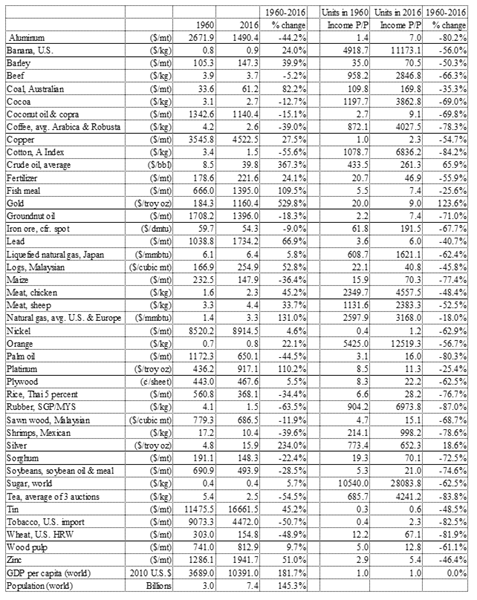 Historically speaking, the oil market was partly shielded from competitive forces by the Organization of Petroleum Exporting Countries (OPEC), a cartel of oil-producing countries. The OPEC nations frequently colluded to restrict production of oil in order to keep its price artificially high. The extent to which OPEC was able to achieve its goal in the past is subject to much debate, but many experts have come to believe that OPEC’s ability to affect the future price of oil is in decline. That’s partly because of fracking of previously inaccessible oil reserves in non-OPEC countries, such as the United States, and partly because of technological developments, such as the accelerating move away from combustion engine vehicles.

Twenty years after his premature death, Simon is still right.

Gold and silver are, in addition to their commercial uses, also “stores of value” or assets that can be saved, retrieved, and exchanged at a later time. Historically, people of all income groups used gold and silver to hide their wealth from rapacious government officials and in times of war. More recently, both metals rose in price during the inflationary 1970s, when many of the world’s most important currencies, including the US dollar, were rapidly losing their value because of monetary mismanagement. They spiked again after the outbreak of the Great Recession and the subsequent uncertainty about the soundness of the financial system.

Where will prices of commodities be 56 years hence? Paul Ehrlich is still around and still sounding the alarm. But he has never again made another bet. As long as humans can avoid war and are free to create and test their ideas, life will continue to improve—perhaps at an even faster rate.