Why Bernie Sanders's Populism Is a Threat to Economic Freedom

With two state primaries behind us, Senator Bernie Sanders has emerged as the early front runner for the Democratic presidential candidacy, according to betting markets. While Sanders portrays his vision as moving the US economy closer to Scandinavian socialism, which in reality is better characterized as free-market capitalism with a large transfer sector, there is reason to believe that his election would move the country in the direction of left-wing Latin populism.

According to Kirk Hawkins, director of the Team Populism research group, populism is defined as a set of ideas articulated in a Manichean discourse that makes a moral distinction between things that are good, as manifested by the will of the people and represented by the populist leader, and those that are evil, or that which subverts the will of the people as a result of a common enemy of conspiring elites.

Populism in this sense rests upon two important corollaries: (1) Some form of revolution or liberation is necessary to subvert the existing order that is suppressing the true will of the people; and (2) The rights and freedoms associated with democratic capitalism, particularly those of the minority enemy group, are deemed as expendable in order to realize the will of the people.

The election of Sanders,  a left-wing populist, may significantly reduce entrepreneurship in the US in addition to significantly hampering economic freedom.

Populist discourse is preoccupied with the discovery and identification of the enemy. Enemy lines can be drawn based on ethnic, native, or social status. The adversary may include such diverse groups as foreigners, minorities, the press, or the business and/or political class.

The recent wave of right-wing populism in Western nations has been characterized by a tendency to portray foreigners and immigrants as the adversaries, leading to calls for anti-immigration and protectionist policies. Does President Trump’s policy agenda ring a bell?

Meanwhile, left-wing populism, which has been common in Latin America in recent decades, tends to portray the business and financial elite as the villain, leading to calls for policy changes with a heavy redistributive focus.

Is Bernie a Populist?

Let’s take a look at some of Sen. Sanders’s comments on social media following his recent victory in the New Hampshire primary.

Now is the time to have the guts to take on the corporate and financial elite of this country that controls so much of our economy and our government.

This short statement articulates Sanders’s view that business leaders and wealthy individuals are conspiring with political leaders for their own mutual benefit to the detriment of the common man.

What we have done tonight in New Hampshire is nothing short of the beginning of a political revolution. Let's win this primary. Let's defeat Donald Trump. And then let us begin the work of transforming this country when we are in the White House.

This message clearly conveys that Sanders believes that a revolution of sorts is necessary to subvert the existing order controlled by the conspiring business and financial elite.

Sanders’s repeated use of the word “we” conveys that he represents the people. His denunciation of business leaders and the wealthy indicates that they are the enemy of the people. His call for a political revolution suggests that this group of people no longer deserve the rights afforded them by a broken system in need of transformation.

An analysis of Sanders’s discourse strongly suggests he is following the populist playbook.

So What if A(nother) Populist Is Elected?

A 2015 study by economists Martin Rode and Julio Revuelta found that populist governments, regardless of their ideological leanings, reduce economic freedom by eroding legal institutions that protect private property and enforce contracts, reducing trade freedom, and increasing economic regulation. If elected, Sanders would attempt to significantly curtail economic freedom. He wants to nationalize the health insurance market, regulate traditional energy providers and charter schools out of business, impose labor market regulations that would significantly increase the costs of firms to employ workers, and impose a wealth tax.

In a 2012 study, economist Manoel Bittencourt found that left-wing populists in Latin American pursued overly expansionary fiscal and monetary policies to satisfy campaign promises for significant redistribution, fueling hyperinflation and macroeconomic stability. Sanders could lead the US down a similar path, as he is calling for a vast expansion of social programs (e.g., college/Medicare for All) that would require a significant increase in government tax revenues to fund. This would entail a steep increase in taxation for most hard-working Americans (not just the ultra-wealthy), either through tax rate increases or, if the spiraling national debt proves unserviceable, an inflation tax created by government seigniorage.

Along with my colleagues Boris Nikoleav and Christopher Boudreaux, I am currently examining the effect of populism on entrepreneurship. We theorize that populist discourse creates regime uncertainty by serving as a credible threat to the stability of the free enterprise system that is crucial for enabling entrepreneurial action. The prospect of Sanders becoming the next POTUS is causing me to feel the Bern…of the future prosperity of the US economy!This raises the costs of entrepreneurial judgment concerning the relative risks and rewards of entrepreneurship, dissuading many individuals from pursuing entrepreneurial opportunities.

Combining data from the Global Populism Database and Global Entrepreneurship Monitor (as well as several other datasets), we are empirically analyzing how populist discourse affects the likelihood that individuals act on an entrepreneurial opportunity by starting a business. Our preliminary analysis, based on nearly half a million individuals in more than 30 countries, suggests that populism is strongly associated with a decrease in the likelihood that an individual becomes an entrepreneur. We also find that the negative effects are much stronger for left-wing populists, as Figure 1 illustrates.

In addition to significantly hampering economic freedom and potentially creating macroeconomic stability, the election of Sanders, a left-wing populist, may significantly reduce entrepreneurship in the US.

In combination with the reduction in trade freedoms created by the incumbent Trump administration, the prospect of Sanders becoming the next POTUS is causing me to feel the Bern…of the future prosperity of the US economy! 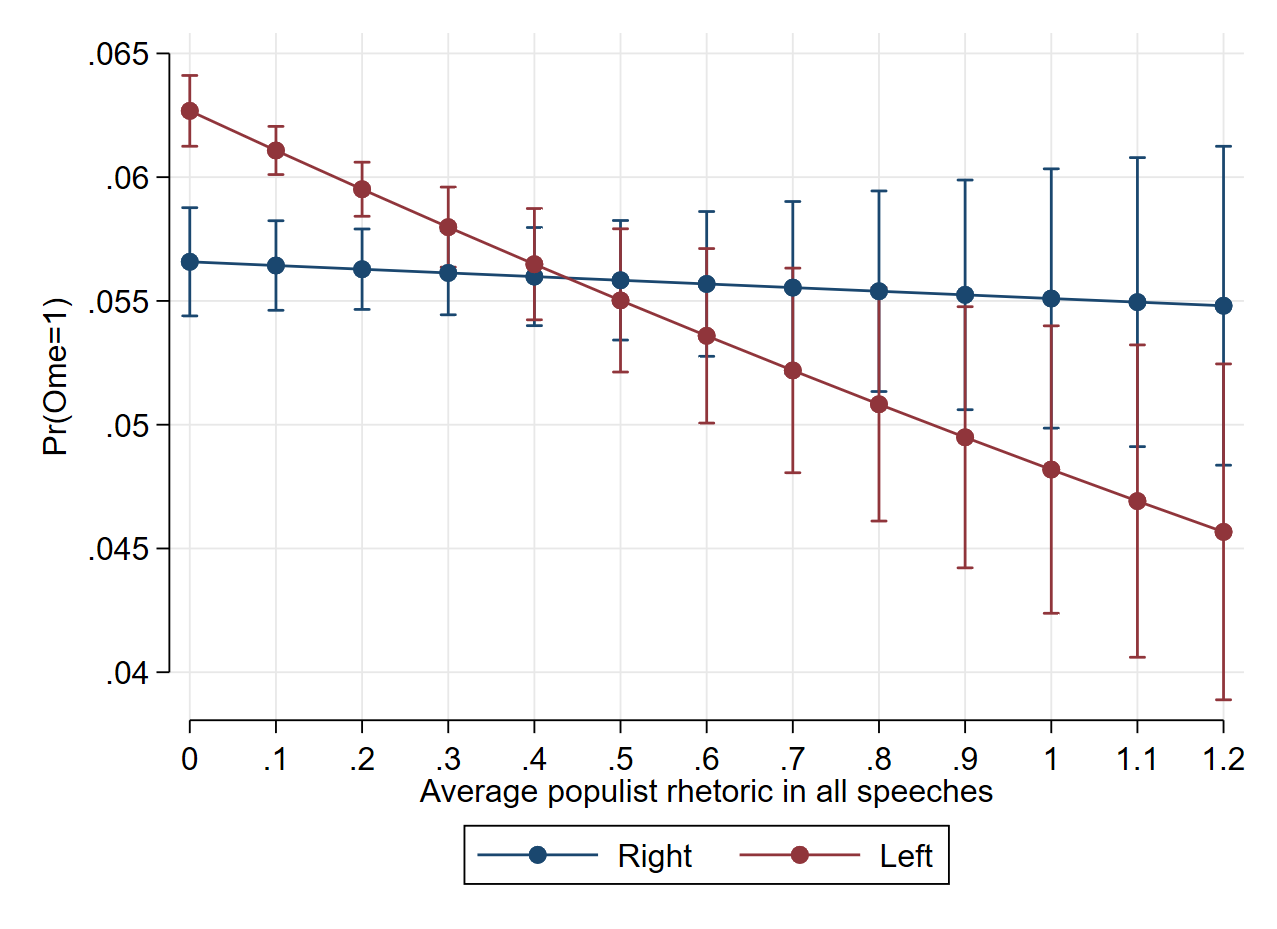 Figure 1: The y-axis indicates the probability that an individual becomes an opportunity-motivated entrepreneur. The x-axis denotes the intensity of populist discourse by the political chief executive. Red and blue lines provide results for left-wing and right-wing parties, respectively.

Daniel L. Bennett is a Research Professor with the Baugh Center for Entrepreneurship & Free Enterprise at Baylor University.