Why All Protectionists Are Essentially Luddites

It’s well-known among people who bother to learn the facts that U.S. manufacturing output continues to rise despite the reality that the number of Americans employed in jobs classified as being in the manufacturing sector peaked in June 1977 and has fallen, with very few interruptions, ever since. 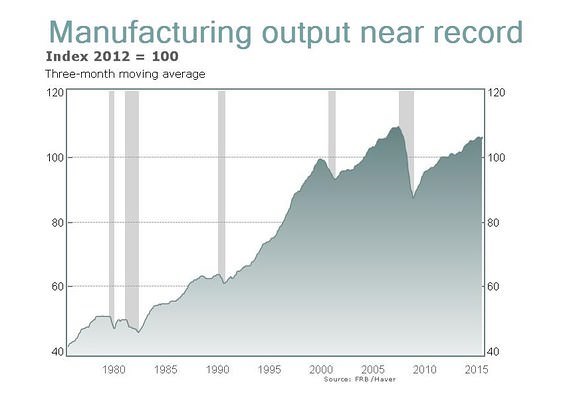 Trade by its very nature is labor-saving. I could bake my own bread with my own hands and my own pans in my own kitchen. But to do so would take more of my own time than is required for me to earn, by teaching economics, enough income to buy bread from a baker. My specializing in teaching economics and then trading for bread saves me some of my labor.

Or I could bake my own bread by using a fancy bread-making machine that sits on my kitchen counter. But I can’t make such a machine myself; I must trade for such a machine, as well as for the inputs – including the electricity – that it requires to produce yummy bread. So it might fairly be said that any bread that I produce in my own home with my incredible bread machine is the result of trade.

Either way – trade with a baker, or my use of the incredible bread machine – I get bread in exchange for less labor than I would have to use to supply myself with bread were I unable to trade with a baker or to use this machine.

What difference does it make if labor is saved by dealing directly with a machine or with another human being?

There are two technologies for producing automobiles in America. One is to manufacture them in Detroit, and the other is to grow them in Iowa. Everybody knows about the first technology; let me tell you about the second. First you plant seeds, which are the raw material from which automobiles are constructed. You wait a few months until wheat appears. Then you harvest the wheat, load it onto ships, and sail the ships eastward into the Pacific Ocean. After a few months, the ships reappear with Toyotas on them.

International trade is nothing but a form of technology. The fact that there is a place called Japan, with people and factories, is quite irrelevant to Americans’ well-being. To analyze trade policies, we might as well assume that Japan is a giant machine with mysterious inner workings that convert wheat into cars. Any policy designed to favor the first American technology over the second is a policy designed to favor American auto producers in Detroit over American auto producers in Iowa. A tax or a ban on “imported” automobiles is a tax or a ban on Iowa-grown automobiles. If you protect Detroit carmakers from competition, then you must damage Iowa farmers, because Iowa farmers are the competition.

That means that protection for Detroit does more than just transfer income from farmers to autoworkers. It also raises the total cost of providing Americans with a given number of automobiles. The efficiency loss comes with no offsetting gain; it impoverishes the nation as a whole.

There is much talk about improving the efficiency of American car manufacturing. When you have two ways to make a car, the road to efficiency is to use both in optimal proportions. The last thing you should want to do is to artificially hobble one of your production technologies. It is sheer superstition to think that an Iowa-grown Camry is any less “American” than a Detroit-built Taurus. Policies rooted in superstition do not frequently bear efficient fruit.

In 1817, David Ricardo—the first economist to think with the precision, though not the language, of pure mathematics—laid the foundation for all future thought about international trade. In the intervening 150 years his theory has been much elaborated but its foundations remain as firmly established as anything in economics.

To repeat an especially important insight: “International trade is nothing but a form of technology.” That is, trade – intranational and international – itself is an innovation. Finding specialists with whom we can profitably trade requires transportation and communication – both of which today are, as it happens, greatly facilitated by advanced machinery. Yet other, less obvious innovations are involved – for example, the supermarket. The organizational form of the supermarket lowers consumers’ costs of learning about and acquiring groceries. (Superstores, such as Walmart, lower those costs even further.) In international trade, the seemingly simple box that we know today as the shipping container is a labor-saving innovation that dramatically reduced the costs of ordinary men and women from around the globe to trade with each other. Ditto the giant, magnificent modern cargo ship.

Our ability to trade is enhanced by technological innovations. Thus, innovations help us to save labor both directly (as with an incredible bread machine on my kitchen counter) and indirect (as with the shipping container that better enables me to acquire goods assembled by workers who live thousands of miles distant from me).