To make housing affordable, policymakers need to remove the things that are making it unaffordable now: excessive regulations.

Across the United States, it is frequently said that a lack of "affordable housing" is a problem. Predictably, this observation is usually followed by the demand that the government—local, state, or federal—"do something" about it. That "something" almost always involves spending more money or issuing a new raft of regulations.

California is a case in point. In San Francisco, for example, the median cost of a single-family home is already five times the US average, and the city now has the highest rent per square foot of any municipality in the nation. To deal with these high prices, Democrats in California’s state legislature want to revive a community renovation program that would bring back redevelopment agencies and the roughly $1 billion they provided annually for affordable housing. The program was previously cut in 2011 by then-Gov. Jerry Brown when the legislature was intent on closing a huge budget hole. Now, Democrats believe their proposal will get a boost from the support of the state’s new governor, Gavin Newsom.

Far away from sunny California, the same story could be told about Minnesota. In April 2017, the Pioneer Press wrote:

Outside coastal states like New York and California, the Twin Cities was No. 1 in housing costs among the nation’s 20 largest metro areas, according to 2014 U.S. Census data. And they have remained at or near the top of other cost-comparison surveys since then. Statewide, Twin Citians pay an average of 26 percent more than neighboring states. That price gap explodes when compared with southern states like Texas. 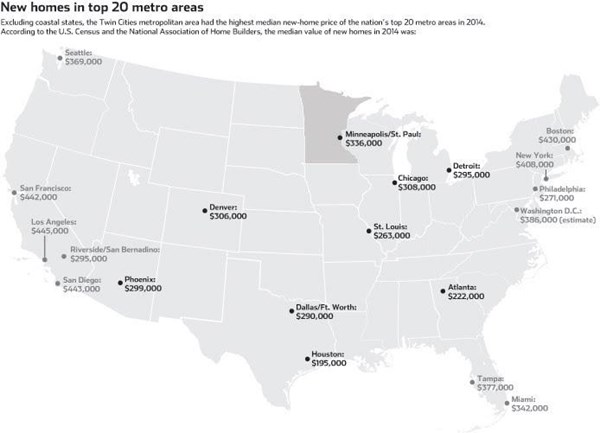 So, policymakers in the Twin Cities are "doing something." Forty million dollars of Minneapolis Mayor Jacob Frey’s 2019 budget is earmarked for affordable housing. Saint Paul’s mayor, Melvin Carter, has announced a $71 million, three-year housing initiative, which will focus both on keeping existing housing "affordable" and building new housing.

But before rushing in to spend and regulate away the lack of "affordable housing," shouldn’t the policymakers in California, Minnesota, and elsewhere take some time to ask what is causing it?

Regulations Are Stifling the Market

...a new report commissioned by a builders group pointed at municipal fees and regulations in the Twin Cities, which it argues are pushing up prices of new homes more sharply here than in other communities, making it nearly impossible to build a single-family house for less than $375,000.

Such fees account for up to one-third the cost of a new house here and are to blame for the area’s affordable housing crisis, according the new report backed by Housing First Minnesota, which represents more than 1,200 builders, remodelers, developers and industry suppliers throughout the state.

The price of a new home “far exceeds what buyers paid years ago, even adjusting for inflation,” David Siegel, the group’s executive director said in a statement. “This disappearance of affordable new homes is not due to a change in buyer or builder preferences, but to homebuilders simply being unable to build at a price that many buyers in the region can afford.”

There are other factors, to be sure, including a labor shortage and the spiraling price of basic materials, including land. But, the Star Tribune continues:

The builders group’s report puts the spotlight on the cost of development fees and regulations levied by municipalities in the seven-county metro area. Those fees are levied before development can start to help pay for roads, streets, curbs, gutters and other infrastructure. They’re paid by builders and developers and passed along to homeowners.

The group worked with four Twin Cities-area builders to determine the cost of building a home in nine suburbs. By studying the cost of local, regional and state fees in those communities, the group determined that by nearly every measure a new home in the Twin Cities costs more than those in every other comparable Midwest market.

For example, it found that an average home in Lake Elmo would cost $47,000 less in Hudson, Wis., and that a new home in the Twin Cities costs as much as $82,000 more than a similar home built by the same builder in the southwestern Chicago suburbs.

In short, the "affordable housing" crisis in the Twin Cities is a creation of state and local government there.

The same is true in California. The bizarre story of Bob Tillman’s five-year, $1.4 million legal battle to turn his coin-operated laundromat into an apartment building shows how regulations constraining supply coupled with rising demand have driven house prices ever higher. Again, when politicians in the Golden State complain about the lack of affordable housing, they themselves are in large part responsible for that lack in the first place.

Treating the Symptoms, Exacerbating the Problem

These regulations are intended to achieve various safety, environmental, and aesthetic goals. Michael Noble, executive director of Fresh Energy, a Minnesota-based energy conservation nonprofit, defended the state’s housing codes by saying “The reason we have codes is to protect buildings, protect public health and not unduly waste energy.” Utopias usually involve someone else suffering to build them.

Policymakers need to wake up. They need to acknowledge that they cannot have these regulations and low-cost housing.

But policymakers need to wake up. They need to acknowledge that they cannot have these regulations and low-cost housing. If they are serious about making housing affordable, what is needed are not new regulations and vast spending programs like those proposed in California and Minnesota; they will either exacerbate the problem or treat only its symptoms. To make housing affordable, what policymakers need to do is remove the things that are making it unaffordable now: excessive regulations.