Which Countries Have the Best Record in Protecting Property Rights?

Even low taxes and light regulation won’t produce much growth if investors and entrepreneurs have no faith in the rule of law or the quality of governance.

My favorite annual publication is the Fraser Institute’s Economic Freedom of the World, which measures the amount of economic liberty that exists in 159 nations. The rankings are based on five equally weighted categories, though I’ve always viewed “Legal System and Property Rights” as being the most important because even low taxes and light regulation won’t produce much growth if investors and entrepreneurs have no faith in the rule of law or the quality of governance.

This is why the annual International Property Rights Index is another one of my favorite publications. It provides a detailed look at why the right to own, utilize, and trade property is essential to a free society.

Property rights are accepted as a linchpin for human beings’ liberty, acting as a catalyst for economic and societal growth , and as a defense against authoritarian temptations…Property is the basis of the freedom to contract, which is simply liberty in action. Without freedom to exchange, a third party, generally the government, intervenes through the political-bureaucratic ruling class. Freedom is more than the right to own property or the right to make transactions, to exchange, to buy and sell. Once citizens lose the right to own, they lose the ability to control their own lives… This Index was developed to serve as a barometer of the state of property rights in all countries of the world.

Here’s the methodology of the Index. There are three main categories, each of which is comprised of several indices. 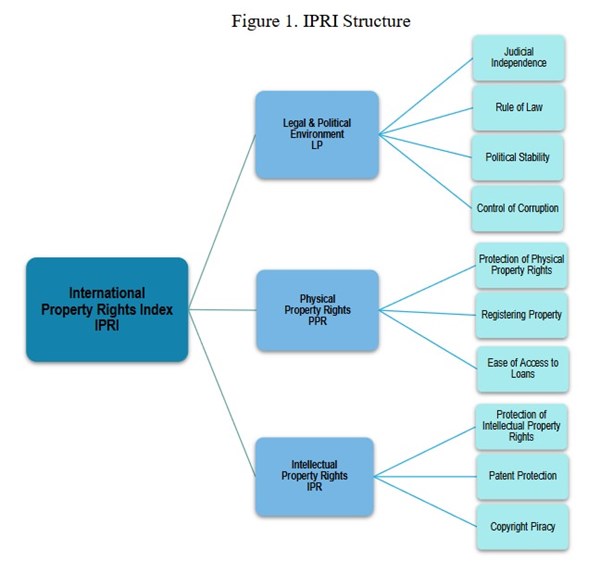 Now let’s get to the rankings.

As you might expect, Nordic nations and Anglosphere jurisdictions dominate, along with a smattering of other European countries.

Congratulations to Finland, New Zealand, and Switzerland for winning the gold, silver, and bronze medals.

If you peruse the full rankings below, you’ll see that the United States is #14 (the same as last year).

Haiti is in last place, below even Venezuela. 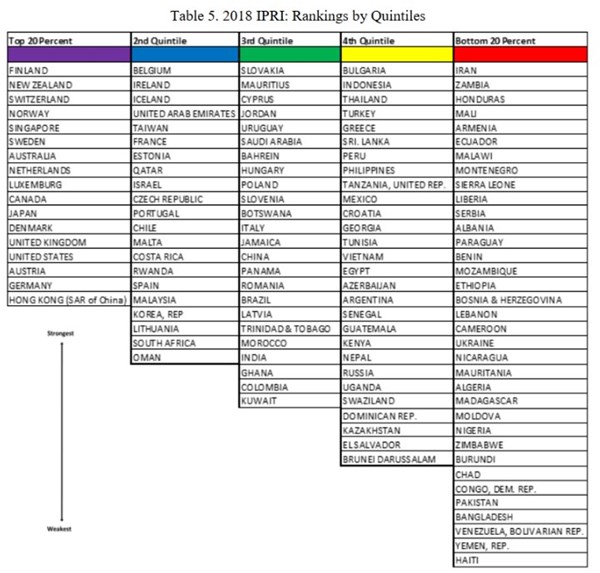 It’s also worth noting that Chile is the highest-ranked Latin American nation.

Now let’s look at the nations with the biggest movement in the right direction and wrong direction. It’s easy to make a big jump for nations that are ranked very low, so Cyprus (which is now near the top of the 3rd quintile) probably deserves the most applause.

And South Africa’s decline is very tragic since it historically has been one of the best African nations.

By the way, if you want to know why property rights are so important, this chart is all the evidence you need. 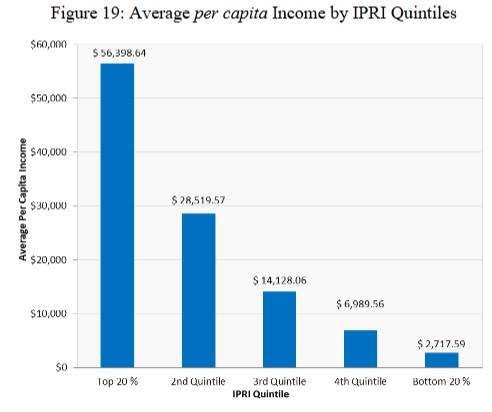 And we’ll close today’s column with a bit of good news.

We don’t have decades of data, but the numbers that do exist show continuous improvement.

And since we also have evidence that overall global economic liberty is increasing, there are reasons for optimism.