What Millennials Reject Is Mutant Capitalism

Studies show that capitalism isn't exactly popular among today's youth. What could this mean for the future?

It’s not exactly news that capitalism has an image problem. Say the word “capitalist” and the image that comes to mind is of a rapacious, self-interested robber baron – less Steve Jobs or Warren Buffett, more Charles Montgomery Burns.

Among young people, the problem is even more severe. For the generation who came of age during the financial crisis, argues George Koopman of the Mercatus Centre in the Wall Street Journal:

“…capitalism isn’t about free enterprise, nor is it about the startups and innovation. When they hear the term, millennials think about Wall Street bailouts, corporate greed, political scandals and tax codes riddled with loopholes for the wealthy and connected.”

This is what his article calls “mutant capitalism” – and it’s scarring the reputation of the good kind. Koopman cites a Harvard Institute of Politics survey showing that about a third of Americans aged 18-29 support socialism, while not even half back capitalism.

In fact, that understates the scale of the problem. Research by YouGov has shown that socialism is more popular than capitalism among young people in Britain and America alike. (Though Americans seem to come to their senses in their twenties, unlike the Brits.) 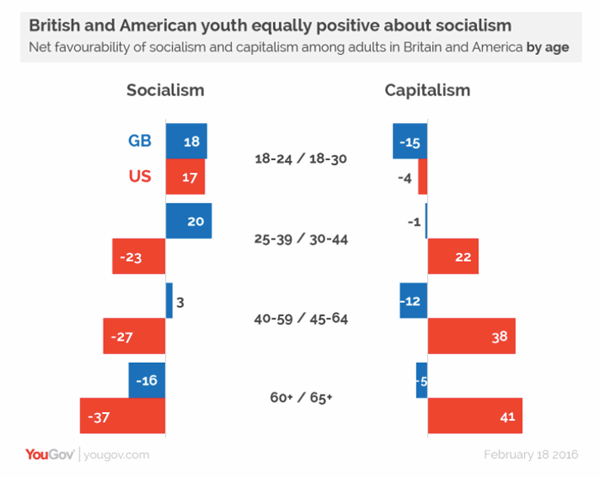 In fact, across Britons as a whole, YouGov’s survey showed more people identifying as socialists than capitalists, by 19 per cent to 16 per cent (48 per cent said “neither”; the remaining 17 per cent were “don’t know”).

So is support for capitalism in jeopardy? Koopman quotes a memo by the Republican pollster Frank Luntz arguing that “the hostility of young Americans to the underpinnings of the American economy and the American government ought to frighten every business and political leader”.

Yet he also points that people are still able to make a difference between “capitalism” (bad) and the free market (good). He cites a 2015 Reason-Rupe poll showing that those of college age in the US much prefer a “free-market system” (72 per cent) to a “government-managed economy” (49 per cent).

In fact, this isn’t a distinctly American phenomenon. Pew’s surveys of global opinion have shown that the free market is still overwhelmingly preferred as a means of organizing the economy in the US and most other developed nations – with a few striking exceptions such as Greece, Japan, Spain and increasingly Italy: 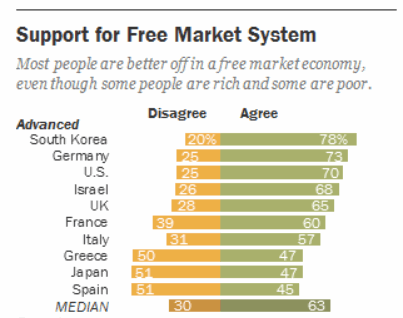 And encouragingly, the picture is even rosier in the rest of the world – where they’ve seen far more of the benefits. China and India are both keener on free markets than America – Vietnam, while nominally Communist, is positively fanatical about them. Even Venezuela, despite the best efforts of Hugo Chavez and his successors (or perhaps because of them), remains in the free-market camp: 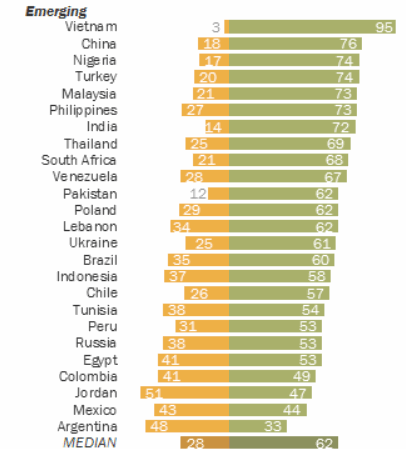 Koopman argues that the lesson of such findings is that we need to differentiate “genuine capitalism” from “the mutant system that has dominated economic policy over the last decade” – and remind people of the benefits of the former before it becomes contaminated by the reputation of the latter.

But there’s another point to make. Even at a time when the world seems to be turning inwards – when politicians on both sides of the Atlantic are competing to sound the most hostile towards free trade, and when angry populism is on the electoral march – a substantial majority of the global population, of whatever age group, still recognizes the benefits that free markets can deliver.

This state of affairs is not, of course, guaranteed. The way that the word “capitalism” has become tarnished by association with cartels, cronyism and bubble-era greed makes it harder to make the case for liberal economics more widely. And countries that lose confidence in the free market risk falling into a self-sustaining trap, taking actions to regulate the economy which end up harming growth, prompting further disillusionment.

But still: young people today may not wear T-shirts saying “Capitalist And Proud”, or pin up posters of Hayek and Friedman on their walls. But nor are they all paid-up acolytes of Bernie Sanders or Jeremy Corbyn. Mostly, they just want what the rest of us want – namely decent jobs, decent homes, and an economy that works to deliver them.