What Iceland Can Teach America about Debt Reduction

Debt reduction is possible. Indeed, there can be huge reductions in a very short period of time.

Image by David Mark from Pixabay

Iceland is a tiny little country with just 338,000 people (about the population of Santa Ana, CA), but that doesn’t mean it can’t teach us lessons about public policy.

I wrote about the nation’s approach to fisheries in 2016 and explained that the property rights-based system is the best way of protecting fish stocks from over-harvesting. 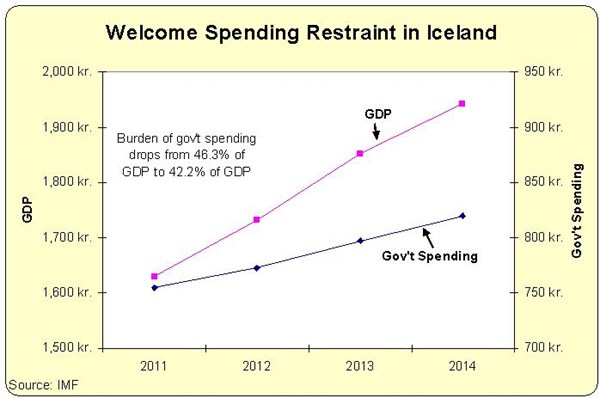 And in 2013, I wrote about how modest spending restraint was helping to solve fiscal problems created by the financial crisis.

Today, I want to further explore Iceland’s fiscal policy, largely because of this remarkable chart that accompanied a Bloomberg report on the country’s budget strategy.

As you can see, debt skyrocketed during the financial crisis and has since plummeted at a very rapid rate. 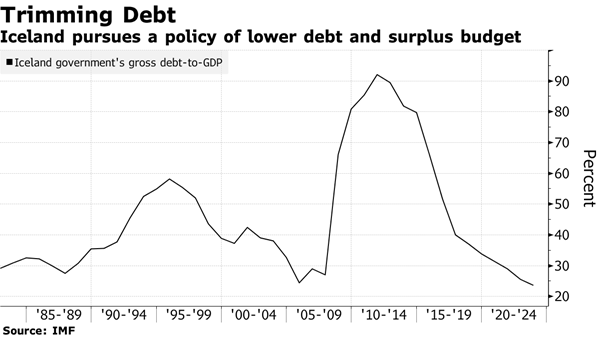 This shows debt reduction is possible. Indeed, there can be huge reductions in a very short period of time.

Here are some excerpts from the accompanying article, which basically tells us that the government is focused on spending restraint.

Iceland will continue to reduce public debt and sustain a budget surplus even as it lowers taxes in the next five years, Finance Minister Bjarni Benediktsson said. The plan is part of a financial road map… The balancing act between austerity and the proposed fiscal concessions means less room for the government to…step up other spending… “We will need to impose certain measures of restriction,” Benediktsson said. The government may have to seek cost savings of as much as 5 billion kronur ($42 million), he said. …The financial plan projects a decrease in taxes as well as the Treasury’s debt levels and interest burden. It also expects the bank tax to be lowered in four steps.

But the article didn’t tell us why Iceland’s debt fell so quickly.

So I dug into the IMF’s World Economic Outlook database and crunched some numbers. I specifically wanted to find out why debt fell, both before and after the 2008 crisis.

And I focused on three sets of numbers:

Here are those numbers, both for the years leading up to the 2008 crisis, as well as what happened starting in 2009. 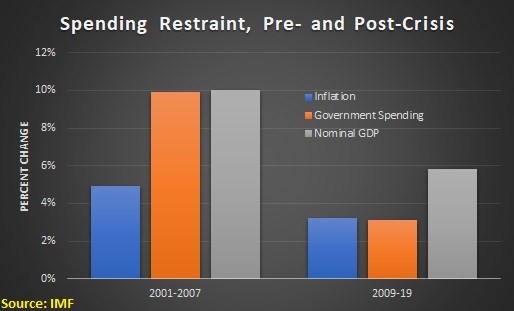 For both the 2001-07 period and 2009-19 period, Iceland followed my Golden Rule. Government spending (the orange bars) grew slower than the economy (the grey bars).

So it shouldn’t be a surprise that debt fell during both eras.

But debt fell much faster starting in 2009 for the simple reason that the gap between spending growth and GDP growth was very significant over the past 10 years. This is the reason for the big reduction in debt.

Voters in Iceland had an opportunity to vote on bank bailouts and 93 percent said no.

And this spending restraint also generated some data that’s even more important—the burden of government spending has dropped from more than 48 percent of economic output in 2009 to less than 41 percent of GDP this year.

During the 2001-2007 period, by contrast, Iceland only barely satisfied the Golden Rule. Indeed, one could argue that spending was growing much too fast since the economy was in an unsustainable boom (Ireland was similarly profligate during the same period).

P.P.S. Unsurprisingly, the OECD has been pushing for higher taxes in Iceland.

P.P.P.S. If you want to read about all of Iceland’s pro-market economic, Prof. Hannes Gissurarson has a must-read article in Econ Journal Watch.

P.P.P.P.S. Voters in Iceland had an opportunity to vote on bank bailouts and 93 percent said no.