Many "consumer rights" NGOs have overt Nanny State policy goals.

A large number of NGOs claim to be standing up for consumer rights. Outside of the conventional practice of assisting consumers with misleading labeling or outright safety issues, many of these consumer activists aren't that much about choices or about rights anymore, but about control. But what exactly are they advocating for?

"Consumer Rights" as a Backdoor to Political Demands

Once you start sifting through the policy proposals of consumer advocacy groups, you find the expected criticisms towards food safety screw-ups by companies (which should rightfully be condemned), but also a number of other policy positions. Let's take on America's nationwide consumer rights organizations as a reference for this point. The National Consumers League features articles on its website which condemn food waste, warn about the risks of energy drinks, or oppose the legalization of raw milk.

In 2014, the group's executive director Sally Greenberg published a blog post which makes the case for a soda tax:

"Like cigarettes, soda is price sensitive; raising the price of these empty calorie drinks may be just what we need to lower consumption levels."

It’s a mystery as to where this group is getting its research on these issues because tobacco happens to be a product that experiences price inelasticity in comparison to most goods (price elasticity of cigarettes is around -0.4), and sugar taxes have proven to be ineffective in practice. But more importantly: what sort of consumer rights group advocates for consumers to drink less soda? Isn't that up to the individual?

In a 2016 article, the NCL criticized the pay of Wall Street CEOs:

"Enforcing Wall Street pay regulations is necessary to prevent another financial crisis and it is one step further towards fighting the economic inequality that faces our nation today."

Things become a little clearer when we find this in the NCL's own mission statement: "The mission of the National Consumers League is to protect and promote social and economic justice for consumers and workers in the United States and abroad." So it's clearly not about consumers rights but about a subjective definition of social and economic justice, which is only an extension of saying: we're purely political.

Another "consumer advocacy" group is Public Citizen, an organization created by Ralph Nader, which, according to itself, "is a nonprofit organization that does not participate in partisan political activities or endorse any candidates for elected office." Glad that they pointed us to this piece of information while they simultaneously argue for higher taxes, retweet calls for tougher gun control, or tweet out things like these: 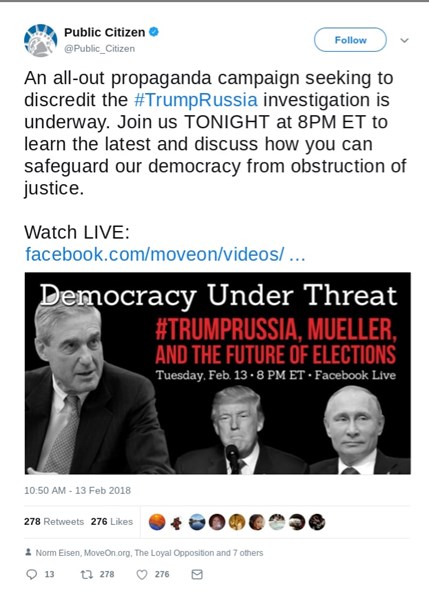 Out of the fear of being misunderstood, I am not arguing that non-profit political activities are of concern. Quite the contrary, I believe that citizens should be encouraged to use these structures to be politically engaged. Claiming, however, to stand for consumer rights in order to advocate a clearly visible political agenda? That's what I'd call misleading.

In Europe, the situation isn't much different. As the European Union is negotiating free trade agreements with other parts of the world, consumer rights advocates are trying to stop any attempt to have frictionless trade.

This month, the "consumer rights" NGO Foodwatch published a report on these free trade agreements which are being negotiated by the EU, including a new one with the four founding members of Mercosur (Argentina, Brazil, Paraguay, and Uruguay). The report’s tenor is well illustrated by this statement from one of its authors, Thomas Fritz, during the Foodwatch press conference:

"Our conclusion is that due to these FTAs [Free Trade Agreements], food trade is indeed likely to grow, along with the risks posed to the consumer and the environment."

Take away the concerns about democracy, judicial procedures, or even those of food standards: these activists would oppose free trade no matter what because it increases food trade. "The risk to the consumer": what risk are we talking about? The risk of falling food prices and increased quality? The risk of increasing their choices? And what "risk" are we exposing the producers in South America to? The risk of increased production and economic prosperity?

What about Consumer Choice Instead?

Instead of being subjected to constant paternalistic public health advocates and to protectionists who limit their options in the stores, consumers should demand choices. Consumers are individuals who can make their own decisions, without the help of intrusive regulators.

This has led to my personal involvement with the Consumer Choice Center, which spreads this exact message: consumers want choice! Be it governments wanting to regulate cryptocurrencies, beer taxes in Canada, vaping rules in Alaska, or France outlawing the "buy one, get one free" offer, the CCC is standing against the Nanny State and is making the case that, instead of outright bans, we should let consumers choose winners and losers in the marketplace. You can join as a voice for consumers locally, and reach out to our voices in the media so that we can make a consistent case for your consumer choice.