Was the US Recovery from the Great Recession a Success?

This difference between “potential” development and real development has been stable and constant over the last 10 years.

In the Project Syndicate article “The US Recovery Turns Ten,” Professor Jeffrey Frankel very optimistically describes the last 10 years of the development of the US economy. He writes:

This month marks the tenth full year of the US economic recovery that began in June 2009.... Assuming the current US expansion continues in July, it will break the record of ten years set in 1991-2001.

The Economist expressed a similar opinion in “America’s expansion is now the longest on record.” By the way, Frankel writes that “[t]his US expansion, however, is far from being a world record. That honor goes to Australia, where the unbroken recovery that began in mid-1991 will soon complete its 28th year.” Naturally, Australia is closer to Frankel’s heart, but it would be good to mention that it is similar in Poland. For 28 years—since 1991—the Polish economy has been experiencing steady economic growth.

A Quick Way out of the Recession

I suggest, however, to look at this 10-year period of "prosperity" in the US from a slightly different perspective: from the perspective of earlier crises in the American economy. I will limit myself only to the crises of the last 50 years (though at the end of this article I will refer to the crisis of 1920-21).

Quarterly statistics on changes in the real GDP of the United States since 1950 are available at The Federal Reserve Bank of St. Louis’ website. Changes in GDP since 1970 are presented in Figure 1; the logarithmic scale was used to make it easier to determine development trends.

The grey bars indicate periods of recession. The beginning and the end of the recession are determined, in accordance with the methodology developed, by the Business Cycle Dating Committee, operating at the National Bureau of Economic Research (NBER).

It is evident in all those crises that the exit from these recessions was associated with an acceleration of growth in the period of economic recovery.

Let's look at the last five recessions (though we would reach similar conclusions if we looked at all recessions in the 20th and 21st centuries). Four crises (in the 1970s, 1980s, and 1990s of the 20th century and the dotcom crisis at the beginning of the 21st century) have one thing in common: namely, the American economy recovered from these crises relatively quickly, and after each recession, it developed in line with trends determined on the basis of data from a few years before these crises (these trends have been marked with red lines in Figure 1).

It is evident in all those crises that the exit from these recessions was associated with an acceleration of growth in the period of economic recovery. Thanks to this, after two to four years, the US economy reached the GDP level from the pre-recession trend.

The Last Crisis Was Different

For the first time, at least for 100 years, the exit from the financial crisis of 2007-2008 was of a different nature. The exit from this recession was not associated with the acceleration of economic growth after a depression, which means that despite the passage of 10 years since the end of the recession, the American economy has not reached the levels of the pre-2007 trend. This difference between “potential” development and real development has been stable and constant over the last 10 years (see Figure 1).

Searching on this subject on the internet, I found an article on the Federal Reserve Bank of San Francisco website titled “The Financial Crisis at 10: Will We Ever Recover?” and a reference to a 2018 work by the same authors (Regis Barnichon, Christian Matthes, and Alexander Ziegenbein) called “Are the Effects of Financial Market Disruptions Big or Small?” In it, they present a comparison of the post-crisis real development with development trends before the financial crisis for the US, United Kingdom, and the eurozone. Figure 2 illustrates this comparison. 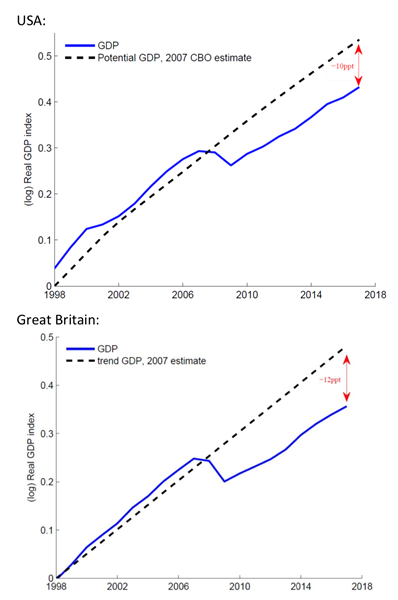 We can see, therefore, that this "pattern" of changes (recovery after recession in 2018) refers not only to the US but also Great Britain and the euro area. The authors estimate that in 2018, the differences between the trends and real GDP growth were between 10 and 12 percentage points. We can expect that these societies would be richer if the economies of these countries emerged from the recession in a way similar to past recessions.

I have let myself supplement the chart presented by the authors (Barnichon et al., 2018) with my predictions on how the American economy would develop if market mechanisms were allowed to lead the country out of the crisis (see Figure 3).

The purple dotted line shows the trend of the American economy determined on the basis of changes in the previous 10 years before the crisis. The continuous green line illustrates hypothetical GDP growth after the 2008 crisis had market mechanisms been allowed to operate and if there had been no different activities of the federal government in the form of, for example, quantitative easing. As it seems to me, in the case of the “free-market recovery,” the American economy would return to development along with the long-term trend after roughly three years.

The 1920-21 crisis is a particularly good example of the possibility of exiting deep economic crises thanks to the dominance of market mechanisms. President Warren Harding cut federal spending by 65 percent in one year and introduced conditions conducive to the development of entrepreneurship (business), and after one-and-a-half years, Americans forgot there was any crisis. That is why so few people have heard of the crisis of 1920-21.

Figure 3 also presents estimates of the potential GDP forecast made by the US Congressional Budget Office (CBO) in 2007, modified later in 2014 and in 2017. Putting aside the problem of ambiguous, mainstream economists' concept of potential GDP, I would like to note the significant differences between the predictions of the US potential GDP made by the experts of CBO in 2007, 2014 and 2017. The necessity to make every few years such considerable modifications of those predictions is not very good evidence of the analytical abilities of CBO experts.

Questions about the Reasons

Their conclusions, however, are very general. They write that a large part of the gap between the current GDP and its pre-crisis level is related to the financial crisis of 2007-2008. They admit that we do not yet have enough knowledge of the mechanisms by which disruptions in the financial market can have such lasting effects on production. One of the possibilities is simply the highly specific behavior of economies with “financial frictions.” They conclude:

[A]dverse financial shocks have large and persistent effects on output, while positive shocks have little effects. In a counter-factual exercise based on model estimates from pre-2007 data, we find that a large fraction of the gap between current output and its pre-crisis trend is due to the 2007-2008 adverse financial shocks and is unlikely to reverse itself, in line with CBO's repeated downward revisions to its estimate of potential output.

We ought to ask for the fundamental reasons for such a specific type of exit from the 2008 crisis and for the existence of a permanent gap between potential and real development (estimated at roughly 10 percentage points). The proposed explanation that “financial shocks” or “financial frictions” play the most important role seems to be insufficient. I would look for these causes myself in the policy of central banks after the crisis in 2008, namely numerous quantitative easing programs, unnaturally low central banks rates (e.g., Fed Fund Rates), or all kinds of government assistance programs (e.g., Troubled Asset Relief Program (TARP; see here and here).

In some respects, the 2008 crisis is similar to the Great Depression of 1929. In both cases, the government's and the Fed's inadequate policies led to a significant extension of the exit from the crisis and huge economic losses.

The Polish version of this article appeared in Obserwator Finansowy.