Venezuela Is Demanding Freedom against a Tyrannical Regime

My people are suffering; half of our country is in extreme poverty.

Yet today in Venezuela, communism is destroying my nation. The communist regime is murdering the opposition, incarcerating anyone who believes in a better future and spreading misery to the entire country. We are living in the worst economic, social, and political crisis in our 206 years of history as a republic.

Mothers have lost sons simply because they yearned for a country in which everyone can prosper.

On April 1, my people – exhausted by the misery, injustice, and hunger in every corner of our country – took to the streets to fight for their liberty. Tired of seeing their mothers without food in the kitchen, their fathers unemployed and desperate for jobs, and their brothers without the chance of a peaceful childhood, the students went to the streets to demand a change in our country.

The demands were clear: freedom, justice, opportunities, and democracy. We just dream about a country in which our families can prosper, where there are opportunities for everyone, and where there is no regime to silence every citizen who disagrees with them with bullets, detrimental economic policies, or their horrible rhetoric of division, hatred, and violence.

Today, after 140 days of peaceful protests, not only has the dictatorship incarcerated more than 5,000 students protesting – with 645 of them still in jail as political prisoners in inhumane conditions – but it has also killed 133 Venezuelans. Venezuela is the most violent country in the world with 30,000 violent murders per year. Families lose a loved one every 20 minutes, and 133 mothers have lost sons simply because they yearned for a country in which everyone, without exception, can prosper, and have a better future. 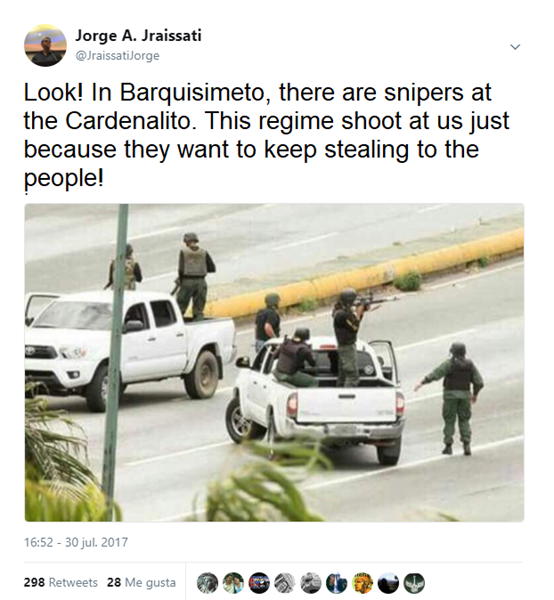 The regime is using its tyrannical power to silence us, to force us to give up our fight and to send a clear message: that they will do anything to maintain their communist grasp on Venezuela. In fact, the dictator Nicolas Maduro, on national television, unabashedly said: "what couldn't be done with votes, we would do with weapons."

Nicolas Maduro, a sociopath and murderer, is following the old communist tradition of killing civilians to impose their system just like China, the Soviet Union, and Cuba. Maduro reminds me of Ernesto "Che" Guevara's statement "a revolutionary must become a cold killing machine motivated by pure hate."

However, Maduro is not the only sociopathic leader in the communist regime making frightening public statements. Just this month, Diosdado Cabello chillingly declared on national television, "A communist dictatorship, that's how we govern." These two quotes clearly illustrate what is happening in my country, a country demanding freedom against a regime imposing tyranny.

I feel there is no better way to conclude this piece than to state what I believe our duty is right now.

My people are wondering every day whether they are going to survive this nightmare.

In Venezuela, we don't have fair elections, media outlets – and all the foundations of a democracy have been corrupted. The regime has obliterated any hope of arriving at a solution via civilized, democratic means. Given such dire circumstances, the only realistic way to reclaim our democracy, reinstate the rule of law, and ensure a free future is to never surrender to tyranny, and never stop fighting.

Nationally, we need to keep protesting, intensify the protest, and implode the regime. Internationally, the governments of the world – led by organizations such as The Organization of American States – need to act, and act now.

My people are suffering; eight out of ten Venezuelans are in poverty, with half of our country in extreme poverty. My people are wondering every day whether they are going to survive this nightmare, and similarly, I find myself wondering when the International Community will build a diplomatic coalition that will bring real change in Venezuela.

A coalition that will bring together all the incredible independent efforts by extraordinary leaders around the world, and will represent the help we need in Venezuela to accomplish something for which we have been fighting for years: freedom. 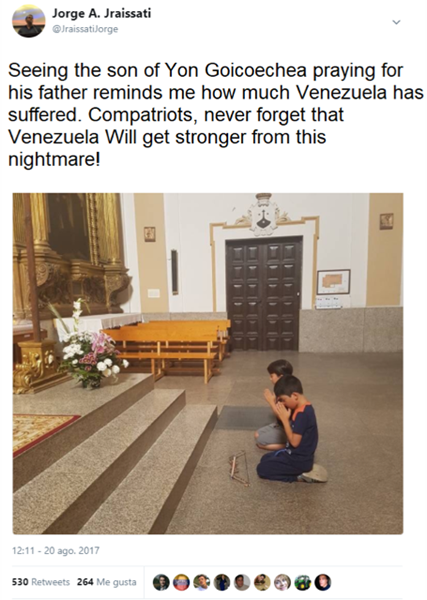 President of Venezuelan Alliance, and FEE alumni, Jorge is a recognized Venezuelan leader at the international level. This as Jorge has been crucial to organize the international community and its efforts to achieve a political and economic change in Venezuela. Jorge studies economics at the Wilkes Honors College at FAU. He also has studies at the Hoover Institution at Stanford and Abigail Adams Institute at Harvard.