Trump’s policies could undermine the hard-won global consensus in favor of free trade—and even destroy the global trading system altogether.

Since becoming US president in January 2017, Donald Trump has pursued an aggressively protectionist trade agenda. Some hope that Trump’s tariffs on imports from overseas will force America’s main economic competitors, including China and the European Union, to lower their tariffs on US goods.

Others worry that Trump is a dyed-in-the-wool protectionist who sees international trade as a zero-sum game where one party must, by necessity, lose to another. Whatever the case may be, Trump’s policies could undermine the hard-won global consensus in favor of free trade—and even destroy the global trading system altogether.

The Power of Free Trade

It is, therefore, worthwhile to remind ourselves of the benefits of free trade and the progress humanity has made in reducing global tariffs in recent decades. There are at least three main economic benefits to trade. First, it improves global efficiency in resource allocation. An additional ton of corn may be of limited value to a farmer in Iowa, but it is immensely valuable to the people in drought-stricken South Sudan.

As a consequence of protectionism, economic growth in general and welfare of the poor in particular have both suffered.

Historically speaking, trade was never free. In the past, governments used tariffs on imports to protect their domestic industries from foreign competition. As a consequence of protectionism, economic growth in general and welfare of the poor in particular have both suffered.

“On the poverty front, there is overwhelming evidence that trade openness is a more trustworthy friend of the poor than protectionism,” noted famed Columbia University economist Arvind Panagariya. “Few countries have grown rapidly without a simultaneous rapid expansion of trade. In turn, rapid growth has almost always led to reduction in poverty.”

Protectionism Is on Its Way Out

Fortunately, tariffs have been declining in recent decades. The chart below shows the reduction in applied tariffs, which are the taxes countries actually apply to imports. They are not to be confused with bound tariffs, which denote the maximum taxes on imports countries can impose under international trade conventions. 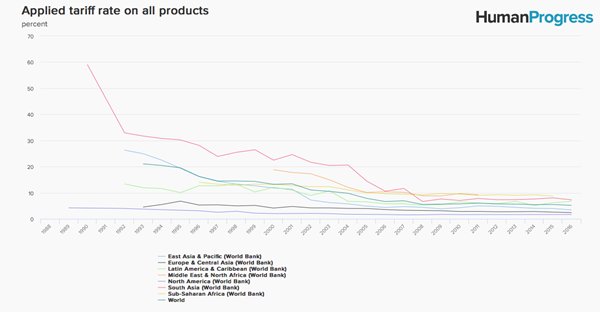 As can be seen, with an average population-weighted tariff of 57 percent, South Asia was the world’s most protectionist region in 1990. Since then, the region has reduced its tariffs to about 7 percent. Globally, tariffs fell from about 21 percent in 1993 to 5 percent in 2013.

Even sub-Saharan Africa reduced its tariffs from 15 percent in 1996 to 9 percent in 2013. Europe, North America, and East Asia continue to be the leaders in tariff reduction, though no region is fully exempt from implementing non-tariff restrictions on trade, including import licenses, production standards, phytosanitary requirements, administrative and bureaucratic delays, and foreign exchange controls.

What was the result of those tariff reductions? According to Max Roser from Oxford University:

Yet protectionism cannot be credited with America’s strong economic growth in 2017. Trump’s protectionist measures did not kick in until January 2018 when the US imposed tariffs on washing machine and solar cell imports.

That progress did not come, contrary to Trump’s oft-repeated assertions, at the expense of the people in rich countries, including the United States. In 2017, the US gross domestic product per capita increased to an all-time high of $59,532, and the median US household income rose to a record $61,400. Moreover, the US Census Bureau also reported that the American poverty rate declined to a level last seen in 2006. Yet protectionism cannot be credited with America’s strong economic growth in 2017. Trump’s protectionist measures did not kick in until January 2018 when the US imposed tariffs on washing machine and solar cell imports.

The measure will start on September 24 and last until the end of 2018. The tariff will rise to 25 percent in 2019. The Chinese have, of course, retaliated with tariffs on goods from the United States. President Trump should take pride in economic policies, including corporate tax cuts and deregulation, that have helped unleash the true economic potential of ordinary Americans.

A trade war with China has the potential to put an end to America’s economic expansion and complicate the lives of millions of Americans. Surely that is not a legacy Trump desires.