Eating insects rather than beef or pork reduces greenhouse gas emissions and pollution. 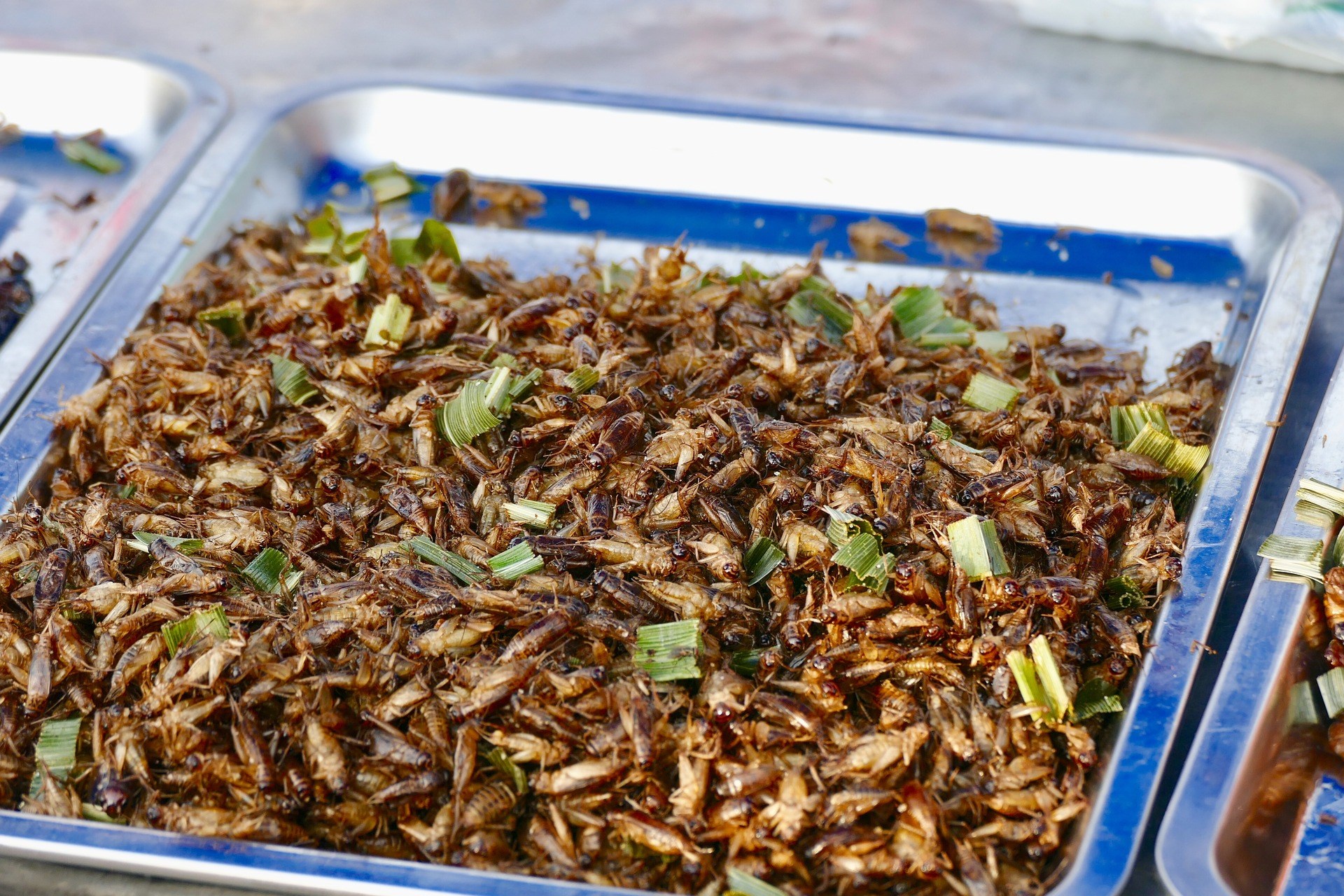 Image by Markus Naujoks from Pixabay

To provide more protein for a world with a growing population, scientists are developing meat alternatives such as maggot sausages, the New York Post reports:

Food scientists at the University of Queensland in Brisbane, Australia are incorporating insects such as maggots and locusts into a range of specialty foods, including sausage, as well as formulating sustainable insect-based feeds for the livestock themselves.

Hoffman says conventional livestock production will soon be unable to meet global demand for meat, so other fillers and alternatives will be needed to supplement the food supply with sufficient protein sources.

“An overpopulated world is going to struggle to find enough protein unless people are willing to open their minds, and stomachs, to a much broader notion of food,” says meat science professor Dr. Louwrens Hoffman. “Would you eat a commercial sausage made from maggots?” “One of my students has created a very tasty insect ice cream.”

Insect protein is certainly healthy, and insects are low in fat. Actress Nicole Kidman eats raw insects—such as mealworms, horn-worms, and crickets—and says they are tasty. Personally, I find crickets and most insects to be quite bland, at least when eaten raw without seasoning. But cooking them with the right seasoning could fix that. (Herbes de Provence comes to mind as a potential seasoning.)

Not all insects are boring to eat. Some are tasty even without seasoning, such as the periodical cicadas that come out of the ground in huge swarms once every 17 years in many eastern states. If you microwave cicadas for a short time, they become quite tasty and meaty. They can also be put in salads, pastas, and risottos, just the way chicken can. Even eaten raw, they are mildly tasty.

Periodical cicadas are an obvious food source because they make little effort to evade capture, do not fight back, and can easily be collected in plastic sandwich bags. They emerge from the ground in huge broods for a period of several weeks, after spending many years underground (10, 14, or 17 years, depending on the region).

After they emerge, they are devoured with abandon by dogs, rodents, and adventurous people. Dogs that spend most of their time outdoors love eating cicadas so much they often end up getting constipated as a result of their feast on cicadas (eating lots of exoskeletons of raw cicadas can give you constipation). This happened to my dog in 1987. It was like the dog version of a hangover.

But most avid consumers of insects live in the Third World, not the West. Westerners often have a visceral distaste for the very idea of eating insects. For those that have this aversion, an alternative meat source might be guinea pigs, which are widely consumed in Peru. Guinea pigs are a much more efficient source of protein, per acre, than cattle, generating four times as much meat per acre. Guinea pigs also generate less net greenhouse gas emissions per pound of meat.

Eating insects rather than beef or pork reduces greenhouse gas emissions and pollution. As Benjamin Kolb notes at SciDevNet:

Insects caught in the wild are already eaten widely in the developing world. Now a study says that farming them on a large scale for food would damage the environment far less than equivalent livestock production.

Scientists compared emissions, by livestock and by insects, of the greenhouse gases methane and nitrous oxide, which have a greater warming effect than carbon dioxide. They also measured ammonia production, which harms the environment by acidifying soil and water.

They reared mealworms, locusts and crickets, all of which are consumed around the world, as well as sun beetles and cockroaches, which people do not eat, despite their potential as a protein source, while monitoring the amount of gas produced per kilogram of insect growth.

The federal government already subsidizes the marketing of various foods, such as promoting expanded consumption of cheese. Yet government officials have done nothing to encourage the consumption of insects, which would have far greater benefits for the environment.

In the 18th Century, the French royal family publicly endorsed potato consumption, to show that the potato was not poisonous.

They should encourage such consumption by publicly dining on tasty bug dishes, in events featuring celebrities like Nicole Kidman. That would set a good example while costing taxpayers nothing.

Such food advocacy has parallels in the past. In the 18th Century, the French royal family ate potatoes and publicly endorsed potato consumption, to show that the potato was not poisonous, contrary to a widespread misconception at that time. They did this to get hungry peasants to grow and consume potatoes, which yielded more calories per acre than wheat.