This Video Mocked Privatization, but the Free Market Got the Last Laugh

Putting passengers at the mercy of a for-profit company? Absurd, right?

My favorite anti-libertarian video is the one based on the notion that Somalia is a libertarian paradise. Since no libertarian has ever pointed to that country as a role model, the underlying premise is a bit silly (I’ve written something semi-favorable about Somaliland, but that’s a different place). However, that doesn’t change the fact that the video is well produced and rather amusing.

It’s now time to share another amusing video with a bad message. It’s not targeting libertarians directly, but it’s mocking an idea that’s being promoted by libertarians such as my colleague Chris Edwards. The video shows a pair of English comedians doing a mock interview back in the 1990s on privatizing the U.K.’s air traffic control system.

Putting millions of passengers at the mercy of a for-profit company? Seems laughably absurd, right?

Except it actually happened. Not only in the United Kingdom, but also in Canada. So advocates of privatization actually got the last laugh.

And we may see similar progress in the United States. Remarkably, even the Washington Post is supporting this reform.

The United States can and should learn from the experience of other Western democracies… Take the prosaic but crucial function of air traffic control. In the United States, that is still a job for big government: specifically, the Federal Aviation Administration. Overseas, however, countries are turning away from this statist model. Canada spun off its system, Nav Canada, in 1996, to a private entity funded by user fees. Britain privatized in 2000. Australia and New Zealand are also part of the movement; ditto Germany and Switzerland… In all of these countries, safety and innovation have stayed the same or improved, which is not surprising.

The editorial urges something similar for America.

A new corporation, funded by charges on the system’s various users, would manage flights and implement the long-stalled modernization. The FAA would still ensure safety, a regulatory job it already does remarkably well and might do even better if it were free to focus on that exclusively. Major players in the industry would share governance of the new entity, working out their differences within its boardroom rather than through the costlier and more conflictual method of lobbying Congress, as they do now.

Wow, the Washington Post is pointing out that a leaner government with fewer responsibilities would be more effective. I hope in the future they apply that lesson on a consistent basis. 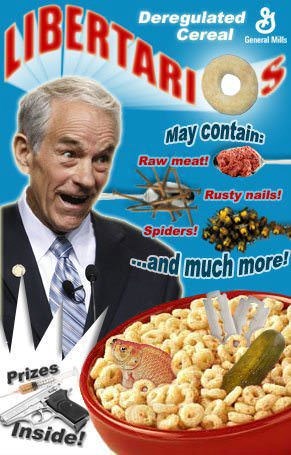 Let’s close with a reference to another bit of anti-libertarian humor. Last year, I shared an image showing a satirical box of libertarian cereal, which I freely admitted was very amusing. But I then made the obvious point that private companies have zero incentive to harm or kill their customers.

Moreover, there’s even a system of mutually reinforcing private regulation that further discourages bad or sloppy behavior by companies.

So the bottom line is that there are greater incentives for safety with for-profit firms than there are with governments, where it’s just about impossible to fire someone for doing a bad job.

P.S. Since I’m a fiscal wonk, I’ll confess that I also want to privatize air traffic control because I’m still irked that the FAA tried to deliberately and unnecessarily inconvenience travelers during the 2013 sequester. Sort of like the jerks at the National Park Service, who did something similar that year during the partial government shutdown (though at least we got some good humor out of that).