There's a Hole in the Middle of Doughnut Economics

And it's not sweet or savory.

The last 30 years have seen the demise of the Soviet Union and its administrative-command economy as well as a revolution in technology and trade that has reduced the transaction costs of using markets.

Many governments around the world have recognized the reality of the power of markets, liberalizing international trade and de-nationalizing production to benefit from the power of domestic competition. The Scandinavian countries have understood that even supporting a generous welfare state requires domestic economic growth, which has led them to cut business regulation and taxation in ways that have given them freer markets than in the US.

The success of that basic economic insight has generated immense cognitive dissonance among many progressives.

The result of all of these events has been an unprecedented reduction in human poverty. The number of people living on less than $1.90 per day (the current standard for extreme poverty) fell from 1.9 billion people, or about 37 percent of the world’s population, to about 700 million (9.6 percent) between 1990 and 2015.

In other words, severe poverty fell almost 75 percent in a mere 25 years, thanks to the freeing of global markets, especially in China and India. No government policy in human history has even come close to what markets have done over that period.

The success of that basic economic insight, that markets improve human well-being, has generated immense cognitive dissonance among many progressives.

Instead of recognizing the ways in which markets have addressed one of the left’s major concerns (severe poverty around the world), progressives, most of whom are not formally trained in economics, continue to attack both economics as a discipline and economists’ belief in the power of markets to address the condition of the least well-off.

The latest entry in this endeavor is Kate Raworth’s Doughnut Economics. Raworth’s indictments of the discipline are a familiar list: homo economicus is unrealistic, economics doesn’t predict crises, it cannot account for the use of natural resources and the damage economic growth does to them, and it equates economic growth with “human well-being.”

Her contribution is a new visual model of the economy that sees it embedded in the center, with the state, the household, and the commons, as a series of concentric circles (like a doughnut) including “society” and the earth. 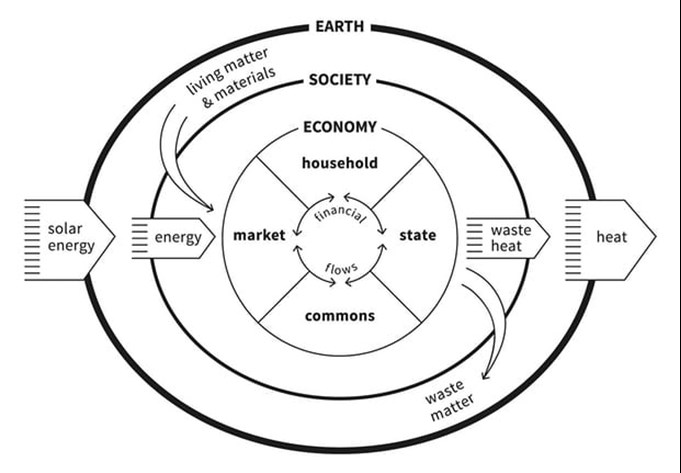 The idea is that we need to live “within the doughnut.” That is, economic activity should not harm the social or ecological relationships that provide the necessary context for that economic activity.

Unsurprisingly, the political wish list that her new model produces is pretty much the same list that progressives have wanted for the last century or more. In George Monbiot’s summary:

Wealth arising from the gifts of nature would be widely shared. Money, markets, taxation and public investment would be designed to conserve and regenerate resources rather than squander them. State-owned banks would invest in projects that transform our relationship with the living world, such as zero-carbon public transport and community energy schemes. New metrics would measure genuine prosperity, rather than the speed with which we degrade our long-term prospects.

With this new model, he and Raworth believe, all of these are actually possible in ways they haven’t been before.

Unfortunately, Raworth’s new model does nothing to improve the likelihood that such measures will address the problems she identifies, and often misdiagnoses.

Her unwillingness to confront the question of whether real world actors, especially politicians, have sufficient information and the proper incentives to behave the way her theory says they should makes her doughnut economy model intellectually unappetizing. Growth is not desired for its own sake. It is a necessary condition for reducing poverty and ecological damage.

Like so many critics of economics, Raworth misunderstands the discipline’s concern with economic growth. Growth is not desired for its own sake, but precisely because there is both theory and evidence to demonstrate that it is a necessary, but not sufficient, condition for reducing poverty and ecological damage, not to mention increasing the level of education, health, and longevity of the population, especially for women. Market-driven growth has turned women from baby machines, effectively owned by their husbands, into educated, full participants in the modern economy.

You can’t eat GDP, but economic growth is what enables us to feed, clothe, and shelter each other better and better. Economic growth makes it possible for all of humanity to expand our capabilities so that we can live healthy, comfortable, meaningful lives.

Raworth also mischaracterizes the legitimate problems that she identifies. For example, the claim that markets produced the financial crisis and Great Recession. That canard has been refuted endlessly by various economists.

At the very least, people who make that argument have to explain how a housing boom produced by the combination of government central banks, government-enforced housing policies, and government-sponsored enterprises like Fannie Mae and Freddie Mac in the US, was somehow caused by “free markets.” The claim that markets are responsible is made as if it were obviously true, despite legitimate counter-arguments.

Raworth ignores the environmental damage done by the same sort of state-directed economies that she wants to expand.

The claim that markets have destroyed the environment is subject to a similar response. Aside from the fact that, by many measures, the environment is faring better than it was a generation or two ago, Raworth’s claim ignores the environmental damage done by the same sort of state-directed economies that she wants to expand. The role of economic growth and the power of property rights to provide the means and institutional structure to encourage better management of resources is a better story.

The more fundamental problem with Raworth’s argument is that aggregate models such as her doughnut fail to account for the most fundamental question of political economy: how well do social, political, and economic institutions provide people with the knowledge and incentives they require to know when they have made mistakes and guide them about how to correct those mistakes?

Her model is at such a high level of aggregation and abstraction that there is no room for asking how and why real flesh-and-blood people act and make choices.

In that way, it is no improvement on the circular flow model and the various other aggregative macroeconomic models that, as she rightly points out, fail to explain the world. It’s odd that someone would criticize modern economics for a misguided model of human behavior and then introduce a model in which there appears to be nothing that resembles a human actor.

Would real actors have the incentives and information to produce the outcome that Raworth says they should?

In reality, the question facing all political economy is how to help individuals with limited and imperfect knowledge discover and correct their errors so that economic and social coordination is possible. We see such coordination all about us thanks to the market.

After all, Paris does get fed, and global poverty continues to fall. It is the price and profit signals of the market that serve, in the words of Ludwig von Mises, as “aids to the mind” in making possible such coordination and the riches it brings to all.

What Raworth and others like her also overlook is whether the political actors are able or willing to produce the outcomes they prescribe on their blackboards and computers. Even if it were theoretically desirable to have state-owned banks determine the direction of investment (which is hardly a new idea, as it can be found in Keynes among others), the real question is whether we can imagine a political process actually producing that outcome.

That is, would real, human actors within the institutional context of politics have the right incentives and information to produce the outcome that theorists like Raworth say they should?

For over 50 years, economists have deployed the set of ideas known as “public choice theory” to analyze the group decision making under political and other institutions. The results clearly indicate that there is no a priori reason to think that politics will produce the ideal outcomes that economists wish for. In fact, there are many reasons to think political institutions are unable to provide the information and incentives to do so.

The result has been decades of deficits.

This is why Keynesianism failed. The theory said politicians should run surpluses in the good times and deficits in the bad times. Doing so was not compatible with the incentives facing politicians who prefer to spend more and tax less in order to stay in office. The result has been decades of deficits.

Good intentions are not enough, nor are aggregate models that do not account for how the information and incentives produced by the institutional environment will enable people to turn those good intentions into good results.

That people like Raworth simply assume that politicians will do what theorists think best, regardless of whether political actors have the incentives and information to do so, means there is a giant hole in the center of their intellectual doughnut. And like real doughnuts, models like Raworth’s might look wonderful and delicious, but they end up containing very little in the way of intellectual nutrition.