There Is No "Nationwide Crime Wave" ?— But Baltimore Is in Trouble

Heather Mac Donald’s Wall Street Journal op-ed “The New Nationwide Crime Wave” has exploded into the debate over police misconduct and criminal justice reform like a flash-bang grenade. It's been discussed on numerous talk radio and cable news shows, and it's been shared nearly 40,000 times on social media.

It’s a story engineered to go viral: It has a terrifying premise (crime everywhere is spiraling out of control!), a topical news hook (it’s all because of protesters!), a partisan bad guy (it’s all liberals’ fault!), and a weapons-grade dose of confirmation bias.

But there is no nationwide crime wave. It is completely manufactured by cherry picking data and misleading stats.

Mac Donald selects a handful of cities and quotes statistics to show that crime is exploding in “cities across America” this year:

In Baltimore… Gun violence is up more than 60% compared with this time last year, according to Baltimore police, with 32 shootings over Memorial Day weekend. May has been the most violent month the city has seen in 15 years.

Murders in Atlanta were up 32% as of mid-May. Shootings in Chicago had increased 24% and homicides 17%. Shootings and other violent felonies in Los Angeles had spiked by 25%; in New York, murder was up nearly 13%, and gun violence 7%.

Does this blizzard of numbers show a “nationwide crime wave”? No.

As John Lott points out at FoxNews.com,

Murder rates fell dramatically in some of these cities. Comparing this year’s January-to-May murder data with last year’s, we find that San Jose’s murder rate fell by a whopping 59 percent; Jacksonville’s fell by 31 percent; Indianapolis’ by 28 percent; San Antonio’s by 25 percent; and Los Angeles’ by 15 percent.

Even in the cities where murder is up compared to 2014, other categories of crime are down. New York, for instance, has had more murders but fewer burglaries and robberies. LA’s other violent crimes may be up, but murder is down.

She also implies that police are being attacked and killed more than ever: “Murders of officers jumped 89% in 2014, to 51 from 27.”

If you compare 2014’s 51 murders to other recent years, it’s not exceptional. In 2012, there were 48 officers killed. In 2011, it was 72. Over the last couple decades, the rate of police murders (and indeed work-related deaths from all causes) have fallen by nearly half, as have assault and injuries of police. 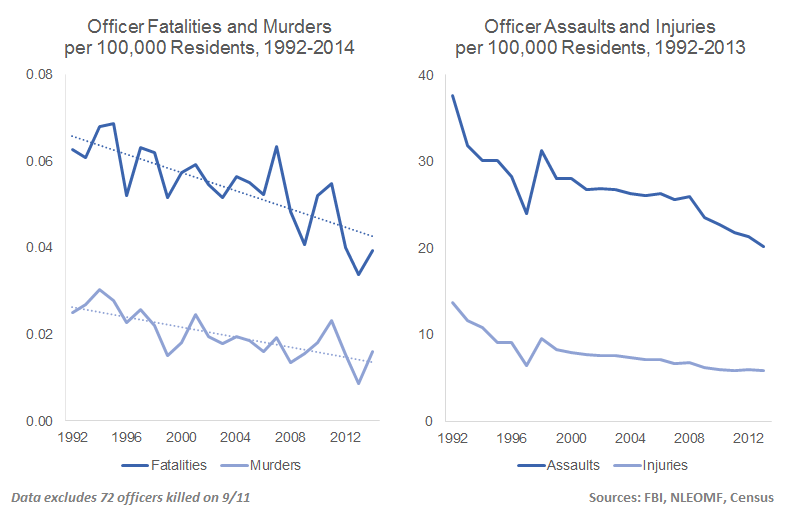 There’s another reason why Mac Donald quoted last year’s statistics for officer deaths when all of her other figures come from this year: officer shootings are down 27% so far this year.

Just like her other statistics, if she had given any context at all to the 89% figure, it wouldn’t have fit with her narrative of rising violence.

But never mind — as the author of this story, Mac Donald knows the cause of this fictitious trend: the “Ferguson Effect.”

The most plausible explanation of the current surge in lawlessness is the intense agitation against American police departments over the past nine months.

By her account, an “incessant drumbeat against the police” is behind the nonexistent “wave” of crime and violence against cops.

But this is also a myth. Public support for police has not waned. Gallup’s polling shows that confidence in law enforcement has been steady since the early 1990s. 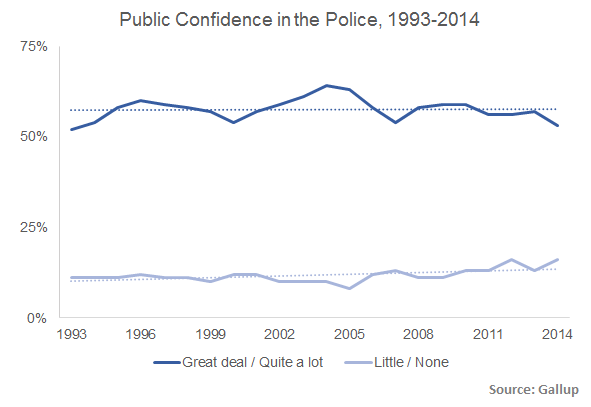 That hasn’t changed, even after the protests against police abuse around the country. A Huffington Post/YouGov survey from April 2015 showed that 61% of Americans have a “great deal” or a “fair amount” of trust in their local department; 21% said “not very much,” and only 14% had “none.”

There is no national crime wave. Big cities are not facing a “surge of lawlessness.” There is no “war on cops.” The public hasn’t turned against the police.

So what’s going on in Baltimore? Mac Donald isn’t wrong about the spike in crime there. Baltimore City really is facing a breakdown in law and order. 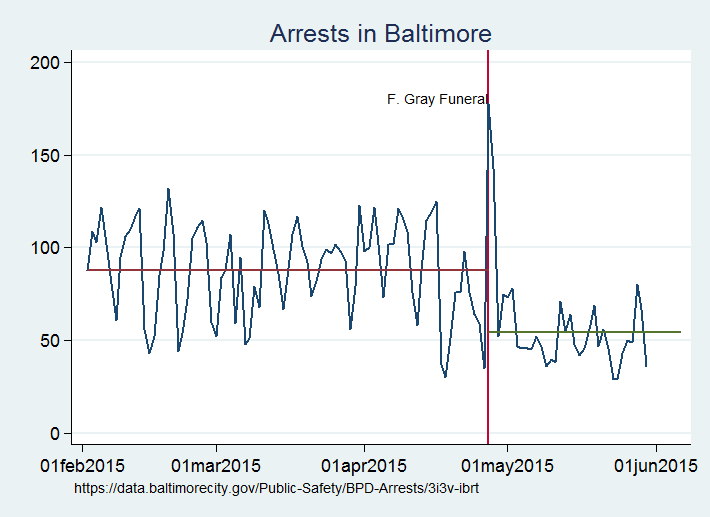 Alex Tabarrok notes that police have made 40% fewer arrests since the start of the protests and the filing of criminal charges against six cops involved in Freddie Gray’s death.

As arrests have declined, crime has soared.

Not all arrests are good arrests, of course, but the strain is cutting policing across the board and the criminals are responding to incentives.

Homicides, for example, have more than doubled from .53 a day on average before the unrest to 1.35 a day after (up to June 6, most recent data) – this is an unprecedented increase – and the highest homicide rate Baltimore has ever seen.

It’s reasonable to assume that the increase in crime is at least partially related to the decline in police activity — criminals respond to incentives just like everyone else — but why aren’t police making arrests?

The answer might be found in the “De Blasio Effect.”

New York saw a similar “work stoppage” — that is, an unofficial strike — by the NYPD during its feud with Mayor De Blasio over his critical comments about the death of Eric Garner.

The NYPD retaliated: Arrests fell by 56% and criminal summonses fell by 92%, until the mayor made up with the department and police work resumed.

Kevin Drum speculates that BPD’s precipitous decline in arrests is a similar reprisal against the indictment of the officers involved in Freddie Gray’s death.

It’s certainly possible that has something to do with it, but officers appear to be genuinely spooked. About 130 cops were injured in the riots — that’s about 4.5% of the city’s officers down over the course of a week. That’s almost twice the rate of injury the average department sustains in a whole year.

Cops are understandably worried. Peter Moskos, a former BPD officer, says, “In Baltimore today, several police officers need to respond to situations where formerly one could do the job. This stretches resources and prevents proactive policing.”

There’s another issue: when crime spikes, police can be overwhelmed. Cases build up, and as new reports pour in, less and less time can be devoted to the old ones.

Most murders in Baltimore this year have gone unsolved. BPD’s clearance rate for homicides has fallen to just 40%, and the surge in killings can only make things worse.

Tabarrok is worried that a new equilibrium for crime could emerge in Baltimore. If crime continues to rise, clearance rates will fall further, detectives will get more backlogged, and it gets even harder to solve the next case. And if the probability of being caught and punished goes down, criminals will commit more crimes.

Some people see criminal justice reform as being anti-cop or “soft on crime,” but it’s not. Reform enables police to do a better job, which reduces crime — and that makes them and their citizens safer.

The best thing that Baltimore can hope for is that cops get back to work and start solving crimes. The best way to do that is for the community to engage with law enforcement.

Communities’ trust in police is key to fighting crime, and right now the BPD doesn’t have it. The Baltimore Sun has documented in excruciating detail the department’s history of corruption and excessive force, writing: “The perception that officers are violent can poison the relationship between residents and police.” And that leads to tips not given, 911 calls not dialed, and witnesses failing to come forward.

Real, credible reform, combined with accountability for misconduct and a strong commitment to community safety, is the best and probably only way to rebuild the relationship between citizen and cop and to turn crime around in Baltimore. The city and the police must embrace the task; they won’t accomplish it without each other.