Price Controls and Rationing Led to Law-Breaking and Black Markets

As the United States mobilized for war after mid-1940, the government’s demands for munitions and related resources began to put pressure on certain markets, and soon prices began to rise. In 1941 they rose faster: from December 1940 to December 1941, the producer price index increased by 17 percent, the consumer price index by 10 percent. In response the government imposed a growing number of selective price controls, enforced by the Office of Price Administration and Civilian Supply, an agency created by executive order on April 11, 1941. The Emergency Price Control Act of January 30, 1942, provided a statutory basis for a successor agency, the Office of Price Administration (OPA). Strengthened by later legislation and executive orders, the OPA eventually administered a price-control system that encompassed almost all civilian goods and services. Thus from early in 1942 until late in 1946, the OPA endeavored to control prices by administrative decree. 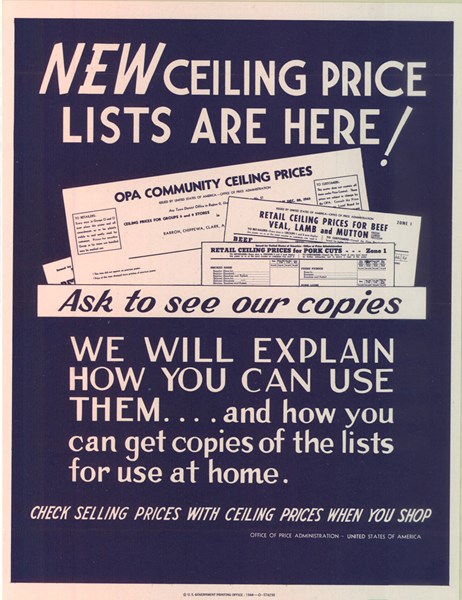 As the government’s war outlays rose steeply and the incomes of a growing legion of war-industry workers rose along with them, consumer demand for goods and services increased rapidly. If prices had been unregulated, this increasing demand would have pushed prices ever higher, especially given that the resources available for augmenting the supply of civilian goods were being depleted by the government’s buildup of the armed forces and the war industries. But because price controls eventually kept the legal prices of civilian goods and services from rising substantially, civilian markets became subject to excess demand and the available goods had to be rationed by nonprice means, such as first-come-first-served transactions and discrimination according to race, sex, and friendship.

Supplies of some goods—including rubber products, sugar, and coffee—had been diminished by Japanese capture of supply sources (Malayan rubber plantations) or by naval warfare or scarcity of shipping services (German U-boats sank many U.S. merchant ships early in 1942). Government claims on rubber and tin cut further into supply, creating extreme excess demand for these goods. Shortages arose for automobile, truck, and tractor tires as well as for sugar and coffee—goods obtained largely from Latin American sources. Canned foods grew much scarcer because imports of Bolivian tin, used to coat the inside of cans, had been diminished by the increased shortage of shipping services. Therefore, many consumers could not obtain certain goods they normally consumed, and workers and housewives grew restive.

To curb the growing dissatisfaction, the OPA subjected scores of basic goods and services (which accounted for about one-seventh of all consumption spending) to rationing, creating a two-price system. To purchase a rationed good legally, the buyer had to surrender to the seller not only the (controlled) money price but also a stipulated amount of ration coupons or stamps (“points”). The system quickly became complex, and it remained subject to periodic changes and to a variety of exemptions for certain classes of buyers and goods. The table on the next page shows the program’s coverage and duration. 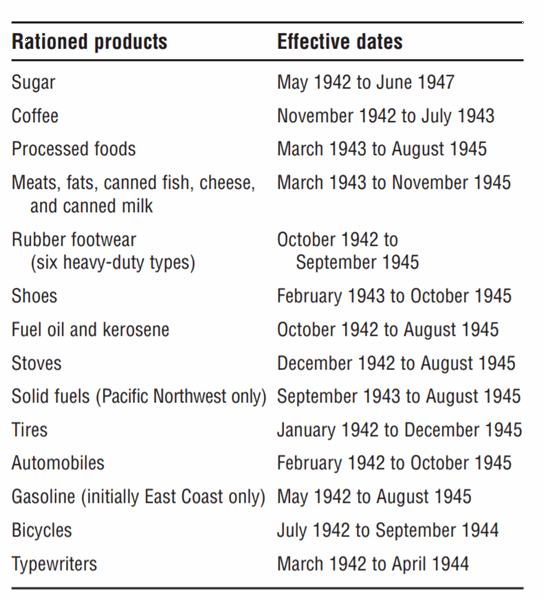 For the housewife, the rationing system meant the mastery of a constantly changing system of point values in the papers; while shopping, she kept one eye peeled on the monetary price and the other on the little red numerals posted on the shelf below products indicating their point price. She practiced double budgeting: money and points. She had to keep track of which stamps were valid during a certain time period, which were outdated, and what they might buy. 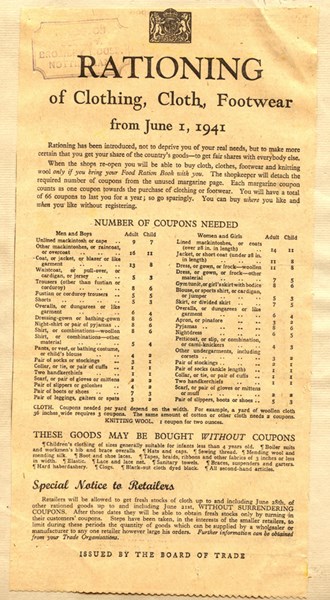 Mastering the prevailing stamp regime was only half the battle. Lingeman writes, “Housewives trekked from one market to another seeking meat for tonight’s supper; some days they were lucky to get frankfurters.” All sorts of expedients cropped up in response to these shortages. Lingeman continues, “So in demand were [frankfurters] that OPA told meat-packers to stretch them with various fillers such as soybeans, potatoes or cracker meal.” Coffee also suffered the addition of various fillers. Even gasoline was adulterated, with a substance known as Lubrigas. Even so, gasoline—along with sugar, butter, beef, pork, and bacon—at times disappeared from local markets. Lingeman concludes that “compared to the average level of peacetime living that most [Americans] were used to, they underwent hardships.” So much for “wartime prosperity.”

Price controls and rationing created opportunities, however, for people willing to break the law. Active black markets developed all over the country. Substantial proportions of all transactions in some goods—especially beef and gasoline—occurred illegally. Housewives routinely bent the rules by trading, giving away, or selling ration stamps, which the law forbade. Mobsters entered the scene en masse, stealing ration coupons from OPA offices and reselling them, counterfeiting ration coupons and selling them, and hijacking trucks and selling their cargos without collecting ration stamps. Cattle rustling made a comeback. 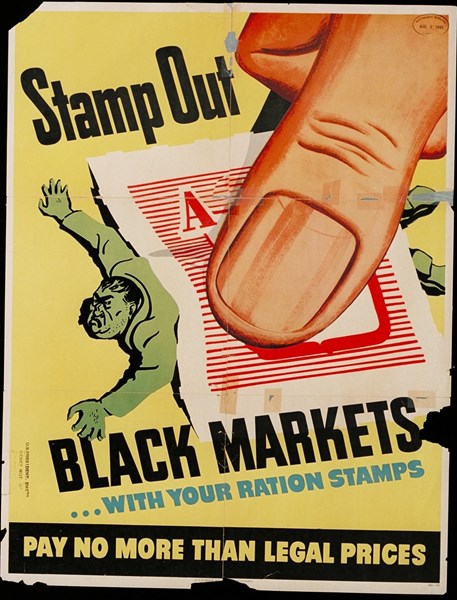 Between February 11, 1941, and May 31, 1947, the OPA instituted 259,966 sanctions of various sorts. “One in fifteen businesses—wholesale, retail, service and so on—was charged with illicit transactions,” and “one in five of all establishments in the country received some kind of warning short of criminal prosecution,” according to Lingeman. Of course, many violations escaped notice, even though the OPA enforcement corps included at various times 2,000-5,000 investigators, working under 500-1,000 attorneys, and many thousands of part-time volunteers. As economic historian Hugh Rockoff notes, “[B]lack-market activities do not leave good statistical records and any estimate must be viewed as having a wide margin of potential error.” Yet he also remarks that “the appearance of deterioration and related evasive schemes in relatively homogeneous commodities,” such as fuel oil, coal, and gasoline, “testifies to the ubiquity of evasion.”

After an extensive study of wartime price controls during World War II, Rockoff concludes in his book Drastic Measures (1984): “The modern state has the power to control prices even in the face of a vast expansion of aggregate demand relative to output, but it can do so only through a drastic regimentation of economic life.” Rationing was an important part of that regimentation.