The Trump/Clinton Suicide Squad against Liberty 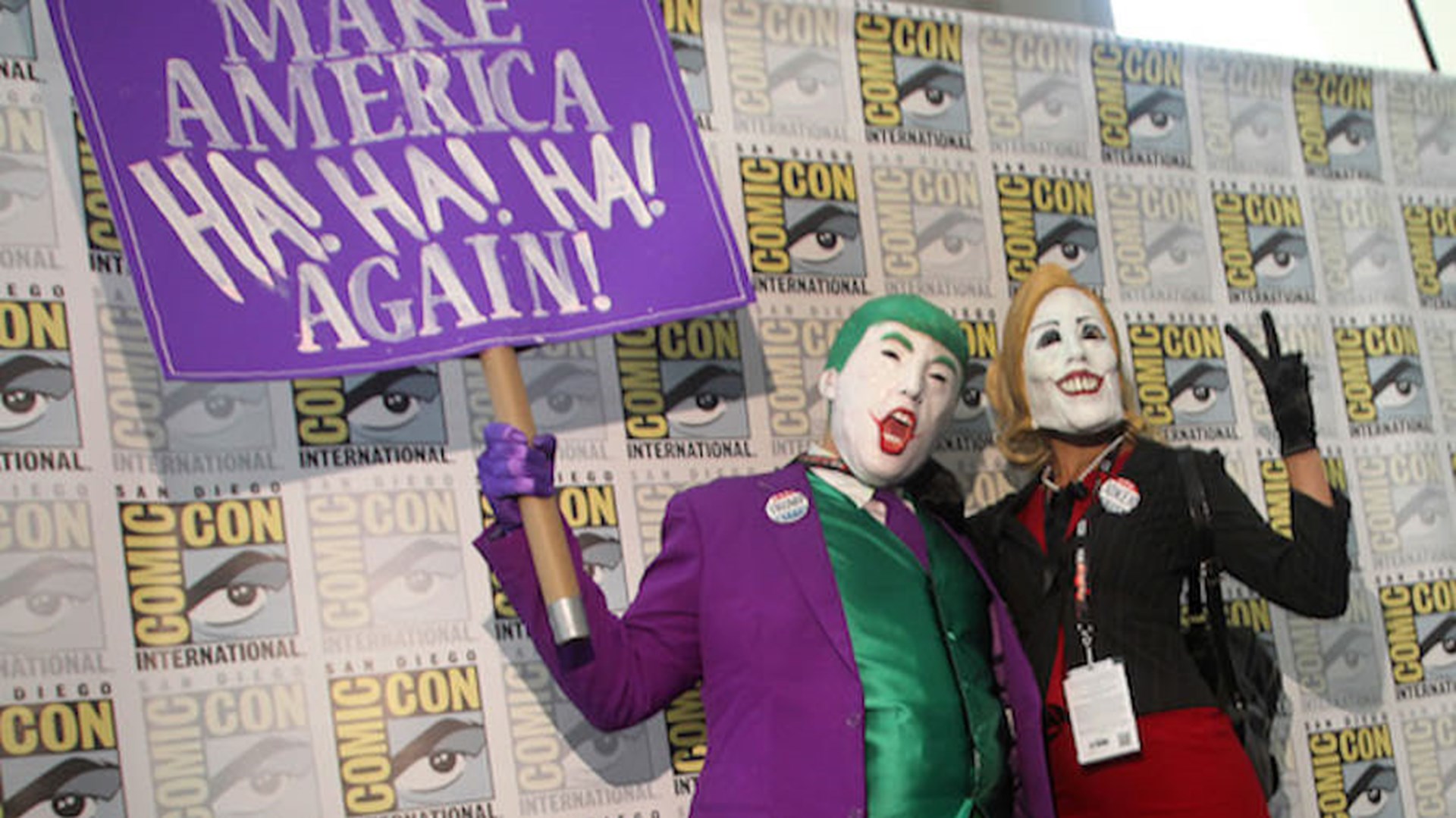 Upon considering the abysmal record of the 2016 summer movie season – Warner Brother’s spliced and diced mutant child, Suicide Squad, being the freshest hell of pish posh to afflict box offices around the nation – I must say American cinema has become quite skilled at stoking anticipation only not to deliver the goods. No matter how immense one’s budget, marketing team, or willingness to pander to audiences, incompetent storytelling will always shine through even the most expensive whitewash job, creating the sorts of stodgy and sordid spectacles moviegoers have endured thus far in 2016.

Yet I watch these shoddy things all the same, handing over the price of admission week after week in hopes of finding a modicum of escapism or catharsis or, at least, shared sacrifice to commiserate over with friends. I’ve found a shared experience is better than none at all – even the crackle and hiss of a dumpster fire such as Suicide Squad – and as goes art, so goes life, especially life in that swampland known as Hollywood for ugly people.

Just as I experienced watching Suicide Squad, I find myself falling asleep to the American political theater’s showing of the 2016 presidential election. Much like the CGI-packed third act of this second-rate superhero movie, the specter of presidential politics hangs over America the beautiful. And unfortunately, both have plenty of passionate fanboys quick to argue for their cause.

Now, many people having told me this is the most historic and unusual election ever, I decided to check my cynical self. You know, have cheer! So, I returned to the election script and read through speech after speech after speech, and I believe I may have found the source of my disillusionment.

Let’s just say, compared to Trump and Clinton's co-dependent love/hate relationship, Harley Quinn and the Joker seem sane. At one moment, the two seem to be fellow travellers, willing to promise heaven and earth in almost identical language, and then the next moment they are at one another’s throats, accusing the other of lies, theft, and murder as though such things were unusual in politics rather than encouraged.

Let's just say, compared to Trump and Clinton's co-dependent love/hate relationship, Harley Quinn and the Joker seem sane.Of course, I know it is heretical – especially as far as partisans are concerned – for me to suggest Trump and Clinton are in many ways the same, but there is one ignoble similarity between the two I would like to spotlight. After reading six of their recent speeches (here, here, here, here, here, and here with a harumph in my heart for each) ranging from foreign policy to economic policy to domestic policing and totaling nearly 24,000 words, not once did I remember them mentioning one crucial word – liberty.

So, I did a keyword search of each speech, and my worst fears were confirmed. Liberty was nowhere to be found.

A Nation Divided by Power

Eventually, I did find two mentions of “liberty” in Hillary’s “House Divided” speech she delivered in Springfield, IL earlier this year. However, the words were not really her own. The first mention of the word was when Hillary directly quoted Lincoln, regarding his ideal of a nation “‘conceived in liberty and dedicated to the proposition that all men are created equal.” The second mention came at the close of the speech, as Hillary essentially quoted the pledge, saying, “We, in fact, will be indivisible with liberty and justice for all.”

And honestly, the last time I can remember Trump saying something about liberty was when Major Garrett of CBS News asked Trump if he sided with security over the liberties enshrined in the Bill of Rights. Trump answered, “I have always come down on the side of security. To me, it's the most important. I hate it. I hate the concept of it, but we're dealing with some very, very bad dudes.”

Interestingly enough, both Clinton and Trump are channeling Abraham Lincoln here on the question of liberty. Yes, indeed, America was conceived in liberty, as Lincoln said, but Lincoln would also go on to set the precedent that security trumps liberty especially in the service of unity. As Gore Vidal said:

Lincoln found that the bronze thread so idly woven into the constitution provided him as commander-in-chief with the powers of a dictator. So, he became dictator. He levied troops without consulting Congress, shut down newspapers, suspended habeas corpus, defied the Supreme Court all in the name of military necessity.

This parallel between Trump, Clinton, and Lincoln got me thinking: how could a nation so indivisible seem so often divided? How could a nation conceived in liberty speak so little of its founding principle?

How could a nation conceived in liberty speak so little of its founding principle?The second question answers the first. Having fallen for the alluring lie of political power, Americans have given up their liberties in the hope of finding unity, equality, security, prosperity, etc. Yet, without liberty as the cornerstone, all are in peril. With so much centralized power at stake election after election, a diverse America becomes more and more divided over who will command this force. It seems the warning, as advanced in Cato’s Letter No. 73 and once so popular with the founding generation, is slowly becoming truer by the day:

Alas! Power encroaches daily upon Liberty, with a Success too evident; and the Balance between them is almost lost. Tyranny has engrossed almost the whole Earth, and striking at Mankind Root and Branch, makes the World a Slaughterhouse; and will certainly go on to destroy, till it is either destroyed itself, or, which is most likely, has left nothing else to destroy.

No wonder Marvel’s Captain America: Civil War was the only action blockbuster hit this spring/summer. It actually reflects the current American psyche, and as we attempt to find the proper use of our immense, destructive powers, I expect America will continue to be divided.

I only hope Americans understand the stakes in the midst of this election’s tedious spectacle. Don’t let the political theater with its players’ promises of power fool you or put you to sleep. No matter how divided or burned out we may become, don’t forget the whole point of America’s story in the first place – liberty.