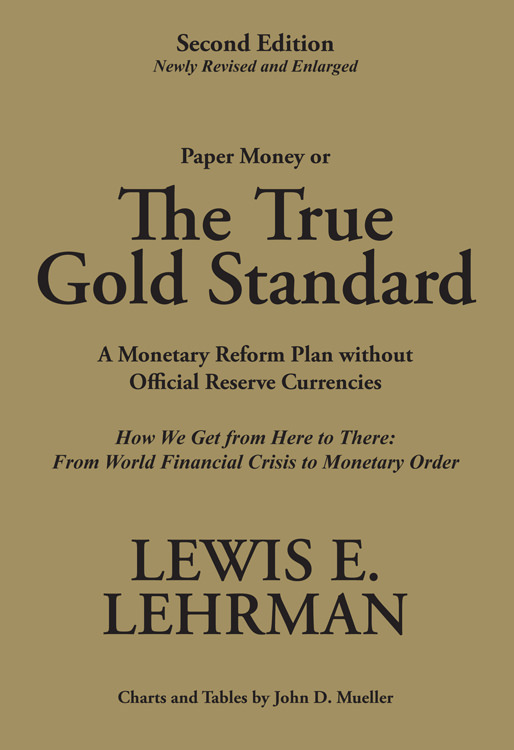 I’ve reviewed many books for The Freeman that are long on diagnosis but short on prescription. Lew Lehrman demonstrates his appreciation of the need to finish the journey from idea to action by subtitling his book, How We Get from Here to There. The "here" and "there" in question are our current fractional-reserve fiat monetary system and a gold standard of the type in operation before 1914.
The book is divided into two parts. In the first, Lehrman lays out arguments many readers of The Freeman will be familiar with, such as the benefits of a gold standard over current monetary arrangements. In the second, Lehrman proffers the outline of a plan to implement a gold standard.
Lehrman makes the basic economic arguments—that a gold standard can:
Lehrman also draws upon the lesson of history. The classical gold standard developed alongside with the breakthrough economic growth of the West’s Industrial Revolution. It was no coincidence. He also makes the legal argument that a gold standard is the type of monetary system called for in the Constitution.
Despite its admirable brevity, the book may not be as widely read as it should be, because its second part—pages 51 through 86—reads like a piece of legislation. This observation is not as much a criticism as it may appear, for several reasons. In the first place, the author intends for it to be, at the very least, a starting point for the legislative enactment of a world gold standard. Second, if all U.S. legislation resembled this one—thirty-six widely-spaced pages, written in clear English, with no hidden power grabs buried in the fine print—most legislators would actually read it before voting on it and the United States would very likely be a much freer country than it currently is.
While Lehrman also argues that a gold standard will place constraints on the Fed, he does not go so far as to call for that institution’s elimination. He does, however, propose that the Fed be privatized and stripped of its monopoly power, and that it divest its portfolio of all government securities within fifteen years (pp. 78–79). That’s a good start. Still, knowing how the International Monetary Fund reinvented itself after losing its raison d’être with the demise of Bretton Woods, I am not yet convinced that such measures would be enough to finish off the Fed for good.
Lehrman’s plan has numerous merits. Demonstrating his knowledge of the history and economics of the gold standard, Lehrman takes pains to avoid repeating the interwar folly of setting the gold price so low as to require wrenching deflationary adjustments—adjustments that would immediately undercut public support for the gold standard. He also seeks to avoid setting it so high as to permit the inflation it is intended to eliminate. Lehrman also sees the need for gold coins to circulate (although the market would determine the extent to which this actually occurs). On the other hand, his provision to suspend the gold standard in wartime suggests he forgets the historical fact that the classical gold standard ended not because of any inherent flaws, but because of the desire of the belligerent powers to engage in inflationary war finance.
While Lehrman ambitiously hopes to implement the gold standard on a worldwide basis, he is not willing to give the rest of the world veto power over what is in the United States’ best interest. The biggest obstacles to its acceptance, however, most surely come from within our borders.
The first includes the well-connected beneficiaries of the unearned and much-abused U.S. privilege of printing the world’s reserve currency. The second is made up of the victims of the current dollar-reserve system, which is to say most of the rest of us, who neither understand nor care about monetary issues. While the presidential campaigns of Ron Paul have made a start in spreading such understanding, books like this one are needed to continue that process.
Lehrman’s book should at the least generate needed debate and serve as a starting point from which to put in place the type of monetary system that will both uproot a key cause of our economic ills and take giant strides in the direction of a freer society.

Robert Batemarco teaches economics on an adjunct basis at Fordham University and Manhattan College. He was formerly book review editor of The Freeman. He is a member of the FEE Faculty Network.