The State is the Religion of the Hidden Corpse

The State is our modern version of the gods of old, which we use to facilitate sacrifice. 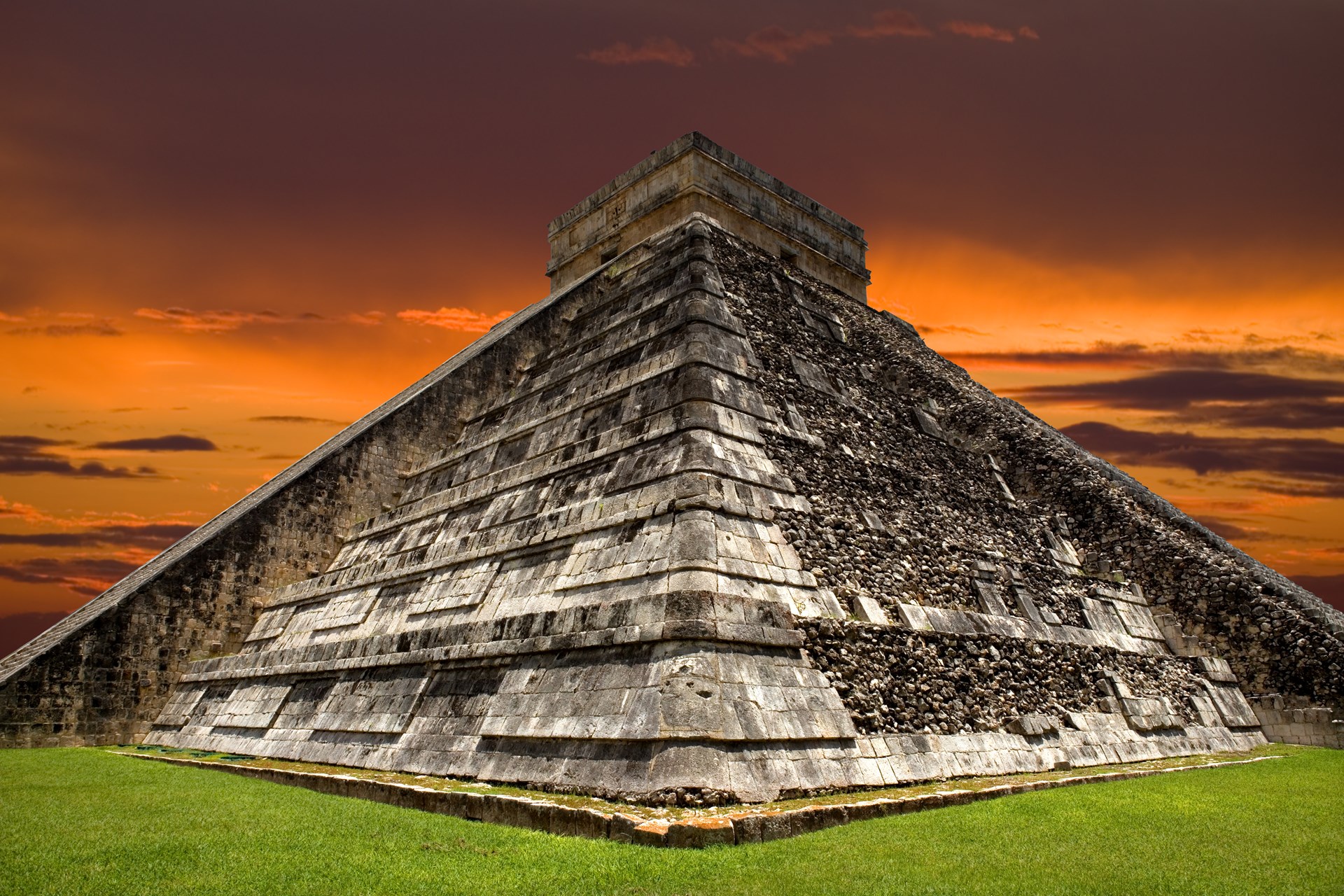 Have you ever attended the ribbon-cutting ceremony of a new local business? Perhaps you've seen the corny shovel groundbreaking ritual of a new building. These events are usually rather innocuous affairs – filled with hopeful mom-and-pop dreamers, nervous glad-handing, cookies and wine and awkward, mayors looking to give their city's blessing on a new startup. “Go forth and multiply capital, jobs, and tax dollars!” is the public decree as onlooking murmurers agree, “That's never gonna work.” Too risky, or somebody's already done that better. But what's always ubiquitous is the nervous hopes looking to overcome risk and the official – the icon of the city – ceremonially granting his community's favor.

Imagine you arrive on the scene, ready to celebrate the beginnings of a new fortress or city. You're nervous yet hopeful about its success; famine, out of control internecine rivalry, anything could cause its epic failure. As you munch on your third stale biscuit, suddenly the chief orders the priests to commence with the laying of the first cornerstone – the place by which all walls will intersect and bind everyone together in peace. Amidst the fervor of the crowd, men begin to push the massive stone into a shallow cleft. The crowd roars in unison as it slams into place. Order is now secured for the future!

As the crowd subsides and home beckons, you make your way past the founding stone. Suddenly you notice a horror – blood is oozing from its sides. Stop. As a member of modern culture, you'd be aghast at such a dreadful sight. Yet as a member of ancient society, you would carry on, safe in the utter assurance that it had to be done. Our city must be founded on sacrifice. We must bury the corpse in its very walls if we are to stave the risk of chaos.

This is not a fantasy. This is our history. It's not that long ago that we still practiced this ritual literally. From a 2005 AP report:

The child found at Mexico City’s Templo Mayor ruins was apparently killed sometime around 1450, in a sort of grim cornerstone ceremony intended to dedicate a new layer of building, according to archaeologist Ximena Chavez.

Priests propped the child — apparently already dead, since the sand around him showed no sign of movement — in a sitting position and workers packed earth around his body, which was then covered beneath a flight of stone temple steps.

The ritual sacrifice of victims in the cornerstone, sometimes buried alive, was practiced around the globe in communities who never interacted with each other – from China and the Middle East to ancient Ireland. It is an archaeological fact of human development. Before we shift this inconvenient fact onto religion, remember that in most of history's conception, religion, culture, and state were synonyms. Religion means to “bind together” and so its tribal cultic rituals were fully emergent of kingdoms. As Brian Zahnd says, "A nation does not metastasize into an empire without shedding rivers of innocent blood. This is what the myths and monuments try to hide."

Don't be blinded by our modern sensibilities. Sure, we've made objective refinements. But these gods still exist. They're called Germany, France, United States, Japan, and so on: nation-states. And we've devised myths – social contract theories, the will of the people, majority rule, the thin blue line, and so on – to justify feeding them more sacrificial victims. We see their political figureheads as capstones – vicarious figures by which we collectively experience a sacred body to which we belong. We ritually cast out figureheads – High Priests of a labyrinthine complex of regulatory rituals – that wear out their sacred welcome in a ritual we call voting. And we anonymously cast out, through plunder and sometimes blood, rule breakers who violate regulations – vestiges of rites of valor, sacred games, and taboos that accompanied our archaic sacrificial origins.

The West's cultural memory of Jesus's crucifixion makes us slowly, increasingly aware of victims and violence and so we are not quite as flagrantly cruel in our sacrificial rituals. We have motifs like due process, innocent until proven guilty, and prison education opportunities because we're an increasingly neurotic society. We still feel the need to have common enemies to cast out and kill, socially or physically, for our own internal unity and shame shifting but we're also increasingly bothered about their plight. So we try to “reform” our misfits and unruly children, once prime targets for archaic sacrifice, for their own good – which led to our modern penitentiary system and violence-based compulsory schooling.

Our greatest vestige of sacrifice is the warfare state.Our greatest vestige of sacrifice – our need to feed our collective bodies with the shed blood of one of our own – is the warfare state. Richard Koenigsberg has been helpful in collecting the sentiments of moderns celebrating the sacred necessity of war for national preservation. During the First World War, French nationalist Maurice Barrès exemplified it: “Oh you young men whose value is so much greater than ours! They love life, but even were they dead, France will be rebuilt from their souls. The sublime sun of youth sinks into the sea and becomes the dawn which will hereafter rise again.”

Some modern statists even appear conscious of the ancient sacrificial roots of war. Koenigsberg quotes revolutionary Irish leader P.H. Pearse on the then-widespread carnage of trench warfare: “The last sixteen months have been the most glorious in the history of Europe. Heroism has come back to the earth. It is good for the world that such things should be done. The old heart of the earth needed to be warmed with the red wine of the battlefield. Such august homage was never before offered to God as this, the homage of millions of lives given gladly for love of country.”

The soldier offers a mixed metaphor, again reflecting of our schizoid culture – his own self-sacrificial valor and yet serving as a collective sacrifice for us. Why, in fact, does he need to die for us? Our freedoms, our sacred voting rites demand it.

Modern statist cultures are sacrificial factories with something gumming up the gears. A counter historical force is deconstructing the works of the sacrificial culture – rendering statist societies increasingly chaotic and confused. Our cultural instincts seek common monsters to expel but we cannot agree on who the monsters are and how gently we should treat them.

The Cultural Project of Jesus

An anthropological examination of Jesus gives us the key to understanding our current predicament, rife with boundless opportunities for liberty but also fraught with new attempts to sacrifice in the name of victims. Yet scholars have long been unable to account for Jesus's enigmatic hints at the purpose of his cultural project.

The Gospel texts often quote Jesus asking, “What is the meaning of the saying, 'The stone the builders rejected has become the capstone'?” Theologians miss it for the same reason we modernists miss it – ideological blindness. The former is trained only to study Jesus through theology, the study of God, to the exclusion of anthropology, the study of humankind. The latter is blinded by their assurance that rationalist ideologies have liberated us from our religious frame of reference.

Jesus uses his teaching and execution as dramatic performance art – a way of exposing and deconstructing the secret violent origins of our state power structures. A few verses before Jesus's cornerstone idiom illuminates his project further. He is riding into Jerusalem on a donkey – a satire on the power-dominance of sacrificial cult kings. The text says the crowd greets him with their favorite folk song references from their Bob Dylan, Zechariah's greatest hits, “Rejoice greatly, O Daughter of Zion! Shout, Daughter of Jerusalem! See, your king comes to you, righteous and having salvation, gentle and riding on a donkey, on a colt, the foal of a donkey...Then he will bring out the Capstone to shouts of ‘God bless it! God bless it!’” The religious leaders jealously demand that Jesus tell his fans to shut up. After all, the Chosen One they've been preaching is supposed to start a holy war – a sacrificial battle to save their nation from the wicked Romans.

Jesus rejects their bloody sacrificial system completely in his reply, “I tell you, if these were silent, the very stones would cry out.” Deeper than the Sunday school sentimentalism of stones singing, Jesus is quoting another rebel prophet, another misfit stone, Habakkuk, who says, “The stones of the wall will cry out, and the beams of the woodwork will echo it. 'Woe to him who builds a city with bloodshed and establishes a town by injustice!'"

Jesus is calling out the very foundation of his own culture, indeed of all cultures. He is exposing the state powers for resting their peace on the perpetuation of sacred violence – on the hidden corpses of their walls.

From the alpha – the cornerstone of hidden victims – to the omega – the capstone, the prized final piece of a fortress – Jesus reveals and inverts our violent anthropological origins.

The state will perish under the weight of its own lies.His crowds are indeed silenced by the collective seduction of group-think. They abandon him during his trial and crucifixion. But in their silence, the stones – all the victims hidden in our cornerstones since the foundation of human civilization – cry out upon Jesus's reported resurrection. The Gospel unveils the hidden power of sacrificial violence and exposes it to the daylight of empathy. The corpse-stones cry out when the Gospel's deconstruction of myth reveals what happened to them in the example of the Passion of Jesus – they were innocents murdered for a false order. He, the misfit capstone, himself a perfect target for sacrifice, was saved for last – and, when he was sacrificed by his city, becomes the capstone of a new world order; one that reveals the innocence of those hidden victims we founded our old ways on in the cornerstones of our cities.

As the next chapter of Luke says, "Everyone who falls on that stone will be broken to pieces; anyone on whom it falls will be crushed.” That's why the West is haunted by victims – Jesus started an ironic subversion of sacrifice unleashed by the aesthetic of the Gospel. It is cultural anti-myth – using the form and fashion thereof to slay our gods of certainty, leaving us free to choose how we will treat each other. It's even dissolving violence-affirming ideological versions of its own story as the Church finds itself the scapegoat de jure of an ever self-critical West.

Jesus, the stone the builders rejected – whose stone grave is announced empty for all to see the futility of his community's sacrifice of him – will break us and any state's violence-based peace to pieces as we stumble upon him. His capstone culture is gradually discrediting all systems of power that try to found works of glory and social order on the victims they bury.

The state – our old-time religion – will perish under the weight of its own lies. It's up to us to form a new world order based on nonviolent cooperation and forbearance.

David Gornoski is your neighbor – as well as an entrepreneur, speaker and writer. He recently launched a project called A Neighbor’s Choice, which seeks to introduce Jesus’ culture of nonviolence to both Christians and the broader public. A Neighbor's Choice is also the name of his weekly radio show on state violence and alternative solutions to it. Email him here.