The Rise of the Wannabe Political Street Warrior

Antifa and the Alt-Right re-enact the political street combat of Weimar Germany. 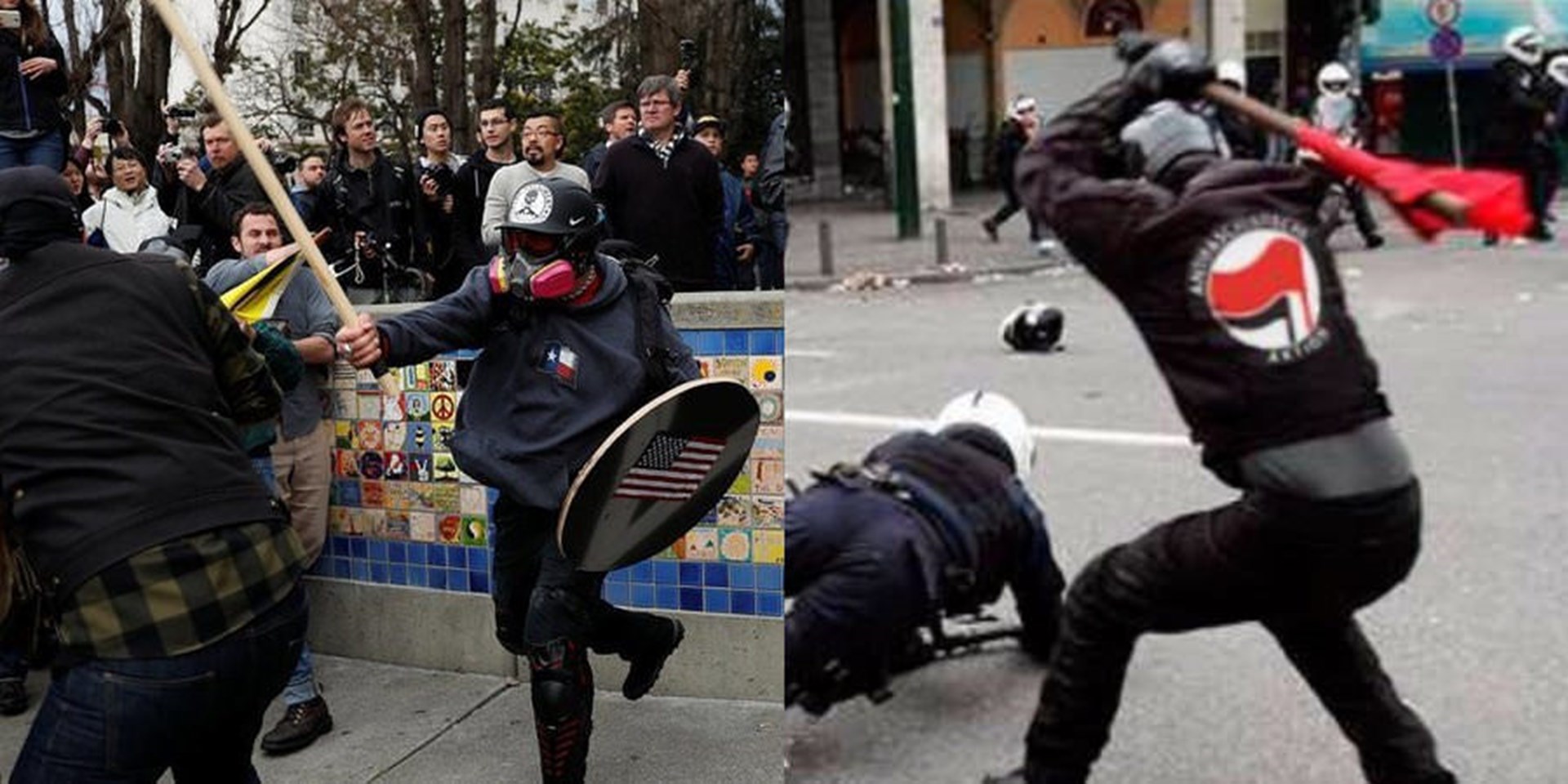 “I can’t wait for the liberal genocide to begin,” exclaimed a demonstrator at a March 4 rally in Phoenix on behalf of President Trump, as an expression half-way between a sneer and a smirk creased his corpulent face. Asked by left-leaning independent journalist Dan Cohen to elaborate on what he said, the middle-aged man insisted that targeting political enemies for mass slaughter would be “a way to make America great again … it’s the liberals that are destroying this country.”

He was Live-Action Role-Playing in a contemporary re-enactment of Weimar-era political street combat.

If the bloodletting this fellow cheerily anticipates were to ensue, he would be, at best, a spectator. He has taken too many trips around the Sun, and made too few trips to the gym, to be of any practical use in the hands-on business of eliminating the Enemy Within. Like most other people at that event, and others like it nation-wide, he was LARPing – Live-Action Role-Playing – in what could be seen as a contemporary re-enactment and updating of Weimar-era political street combat.

Mr. Liberal Genocide, who wore an Oath Keepers t-shirt, did display a little more sartorial restraint than the members of a group calling itself the “Arizona Border Recon” militia, who hovered at the periphery of the event in full desert military kit, striking poses of grim resolution.

“Nobody has respect for our servicemen,” complained one young female demonstrator, her voice thick with outrage. “They might not be government-affiliated, but they’re still servicemen, and they’re still working their butts off to make sure this country is safe. They might not tell you who they are, and that’s because they’re protecting their people.”Through political cosplay people can become habituated into thinking in eliminationist terms.

I Will Fight You IRL

Unlike the valiant, if anonymous, members of the Arizona Border Recon, who seemed content with a bit of combat cosplay, California resident Kyle Chapman, aka “Based Stick Man,” actually threw down – sort of -- with Black Block radicals at the pro-Trump rally in Berkeley on the same day. As each side’s shock troops tentatively engaged on the field of battle, Chapman – attired in hockey pads, a gas mask, what appeared to be a batting helmet, and carrying a plywood shield – pranced into the fray, swatting at Black Block cadres with a long stick that shattered quickly without doing any lasting damage. Not surprisingly, Chapman was instantly cyber-canonized as the “Alt-Knight.”

Several fights erupted at the March 4 events in Berkeley and elsewhere, a few dozen people were injured, and a comparable number of people were arrested. While politically inspired violence of any magnitude is at least troubling, these skirmishes had less in common with the war-to-the-knife confrontations between Freikorps and Spartacists in Weimar Germany than with the cosplay “Battle of Evermore” from the movie “Knights of Badassdom.”

There was an element of precautionary wisdom in that whimsical indie film: The socially marginalized LARPers in that story inadvertently unleashed a tangible, murderous evil. As Mr. Liberal Genocide’s blithe – and apparently sincere – endorsement of mass murder illustrates, through political cosplay people can become habituated into thinking in eliminationist terms: The “other side” is not merely gravely mistaken, but irreducibly evil, and since reason is unavailing the only option that remains is slaughter.

“Next time we see him, we might have to kill him.”

In “The Revolt of the Masses,” which was published in 1930 – a time when Mussolini was still in favor with the bien-pensants -- the Spanish political philosopher Jose Ortega y Gassett observed that through Fascism “there appears for the first time in Europe a type of man who does not want to give reasons or to be right, but simply shows himself resolved to impose his opinions.”

That is to say, there nothing’s either right or wrong, but “winning” makes it so. This conceit isn't limited to one end of the statist political spectrum: It encompasses both the Antifa and the Alt-Right. It was exhibited by the leftist nitwit who sucker-punched proto-Nazi Richard Spencer on the day of Trump’s enthronement, and by North Carolina resident John McGraw, who sucker-punched Rakeem Jones at a Trump campaign rally a year ago.

“Next time we see him, we might have to kill him,” McGraw told a reporter following the rally while he was still in the afterglow from the rapturous ritual of collective hatred. “We don’t know who he is – he might be with a terrorist organization,” McGraw elaborated, guided by the assumption that only depravity of that variety would inspire someone to oppose the Dear Leader. There are more than a few adherents of Trump’s personality cult who have explicitly called for the prosecution, imprisonment, or execution of those who criticize their idol.

“Let’s go back to ancient Rome.”

When the Power Polarity Flips

Attendees at this year’s Conservative Political Action Convention energetically applauded the suggestion that the US government should revive an ancient Roman law allowing for the execution of citizens who “calumniate” – that is, defame – supposedly virtuous politicians.

“Let’s go back to ancient Rome,” urged CPAC speaker Robert Davi, a former actor who fashioned a career as a Trump-worshiping right-wing radio host once the offers to play TV and movie villains dried up. “If such laws existed today, we would see more men like Donald Trump and Mike Pence running for Congress or the Senate or the presidency and more fake reporters perhaps going to prison for the very lies they make up to commit cruel character assassination against the very best of our American heroes.”

In a similar vein, Fox News commentator Matthew Vadum has repeatedly called for critics of Trump, such as former CIA officer-turned-independent presidential candidate Evan McMullin, to be executed for “treason.”

The behavior of such Trump loyalists, it must be said, is not significantly different from that of first-term Obama supporters who accused the Tea Party movement of fomenting “sedition.”

This is exactly the same aria of civic outrage being performed by Trump fans today – albeit in a different collectivist key.

“The entire right wing” is guilty of “sedition in slow motion,” by offering “incitement to revolt” against Obama, complained Sara Robinson of the Soros-funded Campaign for America’s Future in a 2009 essay. In similar terms, professor and MSNBC pundit Melissa Harris (who, with a hyphenated surname, later became notorious for an ad describing children as the collective property of “society”) said that by comparing Obama to despots like Hitler and Mao, the Tea Party was guilty of treasonous sedition.

“The Tea Party is a challenge to the legitimacy of the U.S. state,” declared Harris, without offering a convincing argument for the state’s legitimacy. “When Tea Party participants charge the current administration with various forms of totalitarianism, they are arguing that the government has no right to levy taxes or make policy.”

During the debate over Obamacare, Harris continued, “Many GOP elected officials offered nearly secessionist rhetoric from the floor of Congress…. They joined as co-conspirators with the Tea Party protesters by arguing that this government has no monopoly on legitimacy.”

This is exactly the same aria of civic outrage being performed by Trump-centric politicians and pundits today – albeit in a different collectivist key.

Such feeble street violence does whet degenerate appetites that will grow to dangerous proportions as times get leaner and meaner.

Eight years ago, it was the populist Right that chanted the “Not My President!” refrain, while the Left denounced them for their lack of “patriotism” and their defiance of the “rule of law.” Now what Lenin would call the Who/Whom polarity has shifted. Tea Party veterans who once saw rule by executive decree as the distillate of tyranny now thrill to every stroke of their president’s pen, and many of the same people who had upbraided Obama’s critics as less than patriotic are reconsidering the wisdom of nullification and interposition.

Collectivist mass movements, warned Ortega y Gassett, aren’t organized around principles or ideals, but rather propelled by what he called “appetites in words,” particularly the basest appetite, which is a desire for power over others. Unlike the wholesale violence that our country saw in the late 1960s and early 1970s, contemporary street-level political conflict is heavy on posturing and pretense and light on actual bloodshed – but it does whet degenerate appetites that will grow to dangerous proportions as times get leaner and meaner.

William Norman Grigg (1963-2017) was Managing Editor of the Libertarian Institute and an award-winning investigative journalist and author. He was the author of five books, most recently Liberty in Eclipse: The War on Terror and the Rise of the Homeland Security State. Mr. Grigg wrote and published the Pro Libertate blog (www.freedominourtime.blogspot.com) and hosted the Freedom Zealot podcast. See his FEE.org obituary.