Given the legal incoherence surrounding marijuana, producers and retailers of the drug are faced with threatening dilemmas

Congress continues to resist decriminalizing marijuana even as a popular crusade to legalize its use state by state may soon mean almost a quarter of Americans can smoke up at will, not including the many more who can use the drug medicinally. This conflict between state and federal law creates an unstable financial environment for producers and retailers of marijuana.

This has resulted in a patchwork of state laws alongside federal ones that have put the nascent industry in legal and financial limbo.

Despite attempts to remove marijuana from the federal Controlled Substances Act, the government continues to define it as a dangerous drug with no proven medical uses.

Voters in many states disagree. Presently, Colorado, Washington, Oregon and Alaska permit the sale and consumption of social marijuana, Washington, D.C. allows its consumption but not its sale, and 25 other states have legalized its medical use.

On Election Day, many more may follow their lead. Voters in Arizona, California, Maine, Massachusetts, and Nevada will decide whether to legalize marijuana, while four other states will decide whether to allow medical use or ease restrictions. If the results of the legalization initiatives are all “yes,” about 23 percent of the U.S. – or 75 million Americans – will be able to use marijuana socially, up from 5.6 percent, or 18 million citizens, currently.

This conflict between state and federal law creates an unstable financial environment for producers and retailers of marijuana.

To get a better picture of the industry and the burdens imposed as a result of schizophrenic policies, a team of researchers from the University of Utah and the University of Michigan is conducting a survey of businesses that grow, process and sell marijuana in several states that have legalized it.

Preliminary results from Colorado suggest the conflict between state and federal policies is taking a severe toll on the industry. 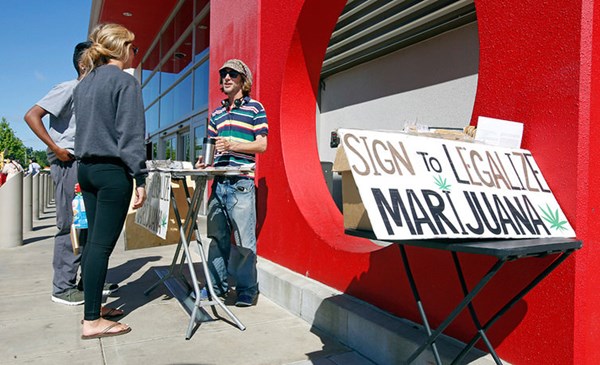 Taxed through the nose

How the federal government taxes cannabis companies is one of the biggest burdens the marijuana industry must bear in the current environment.

In particular, section 280E of the Internal Revenue Code prevents companies from taking any deduction or credit from a trade or business that consists of “trafficking in controlled substances.” In other words, they pay far more than other businesses because they can’t deduct most legitimate business expenses such as labor, materials and other costs of production. They can, however, take a small deduction for “cost of goods sold.”

Preliminary results from the survey suggest that businesses are paying effective combined tax rates of 40 percent to 75 percent. The wide range is likely due to the sophistication of the larger, more established companies that can afford both an aggressive tax-planning strategy and set aside money for a likely IRS audit. Smaller businesses, on the other hand, lack such resources and are more likely to self-file, which means the companies least able to afford the high tax rates are the ones paying them.

Overall, the current federal tax design results in a large deadweight loss to all stakeholders in a state’s economy. 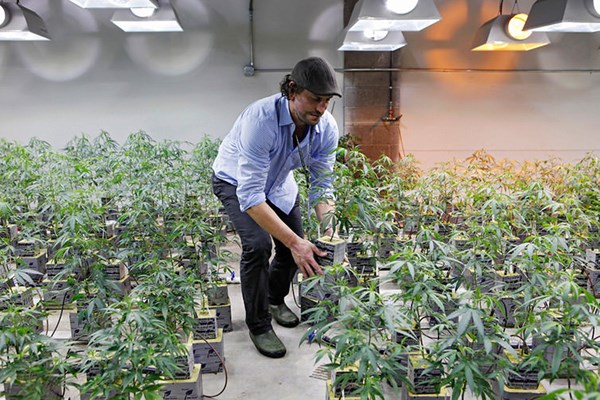 Matthew Huron, the owner of two medical marijuana dispensaries and an edible marijuana company in Denver, examines a plant in his grow house. Ed Andrieski/AP

The perils of banking

The other main burden for marijuana businesses is banking. And unfortunately, there’s even more uncertainty here. Marijuana retailers that deal only in cash have become easy targets for criminals.

The Bank Secrecy Act of 1970 prevents federally chartered banks and credit unions from providing financial services to the cannabis industry, which is considered money laundering.

While the Department of Justice and U.S. Treasury have tried to establish some guidelines for financial companies, the CEO of the Colorado Bankers Association warned its members that only “an act of Congress” will allow banks to work with the industry without fear of criminal prosecution.

Preliminary survey results show that fewer than half of cannabis businesses in Colorado are involved in banking, which deprives them access to the normal services companies rely on to grow and operate efficiently. The banks and credit unions working with the industry tend to be small and local and doing business cautiously. In order to navigate working with a marijuana-related enterprise, the individual banks are responsible for making sure that a business is fully compliant with state law. Even then, banks may run afoul of federal regulations.

For example, in January a federal district court ruled against a credit union – set up to provide banking services to cannabis businesses – seeking access to the Federal Reserve banking system. Even though the guidelines suggested marijuana businesses might not be prosecuted by federal officials, the bank necessarily would be involved in illegal activities.

Although sympathetic to the dilemma of marijuana business owners without banking privileges, the judge said that courts couldn’t simply ignore federal law.

“In short, these guidance documents simply suggest that prosecutors and bank regulators might ‘look the other way’ if financial institutions don’t mind violating the law. A federal court cannot look the other way. I regard the situation as untenable and hope that it will soon be addressed and resolved by Congress.”

Congress, of course, has resolved the issue by not resolving it, and looking the “other way” is a poor substitute for policy in any case.

Cannabis businesses lucky enough to find a financial institution willing to work with them end up paying extremely high fees for an account that generally only allows them to issue checks or direct deposits to merchants and employees. They remain unable to apply for loans and access other financial services. This results in a high cost of business capital.

The unlucky ones without a relationship with a financial institution are either entirely cash-based or work with a payment processing company willing to provide services through its networks.

Those that deal only in cash, however, have become easy targets for criminals. 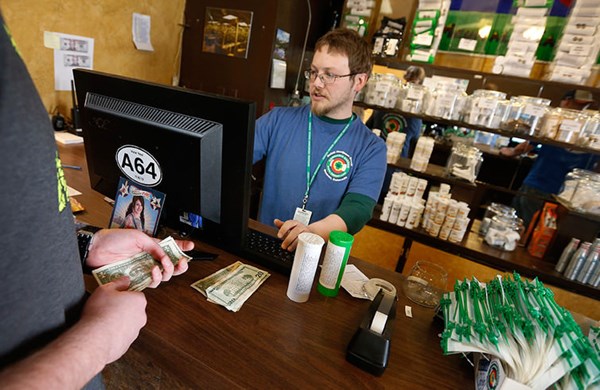 Given the legal incoherence surrounding marijuana, producers and retailers of the drug are stymied by two related dilemmas: They have no access to legitimate banking channels and they are denied equitable federal tax treatment compared with other businesses.

Despite that, marijuana makes up a substantial and rapidly growing segment of the economy. A single state, Colorado, generated nearly a billion dollars in revenues in 2015 – and US$135 million in states taxes and license fees – up from $669 million in 2014. Revenues of that magnitude should be promoted rather than seriously wounded by tax policy.

Federal action is unlikely in the foreseeable future. According to a recent study by pro-pot advocacy group NORML, “support for substantive marijuana law reform is far less pronounced among elected officials than it is among the voters they represent.” About 60 percent of American adults believe that marijuana should be legal, but only four percent of Congressional members received NORML’s “A” grade on the issue.

For the moment, sadly, the 1936 cinematic melodrama “Reefer Madness” – which depicted marijuana use as the pathway to rape, murder, and insanity – is still playing at selected theaters inside the Beltway.

Republished from The Conversation