How can firms motivate top sales performers without promoting them to positions for which they may not be suitable?

The Peter Principle is the observation that if people are good at doing their jobs they will be promoted. It follows that eventually, everyone will be doing a job that they are not good at (otherwise they would have been promoted). The Peter Principle is tongue in cheek but it’s stuck around because it has an element of truth. 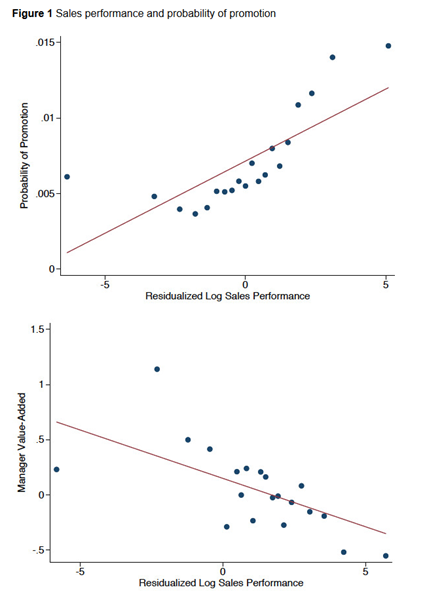 But the result is deeper than this point because it raises questions about management. How can firms motivate top sales performers without promoting them to positions for which they may not be suitable? If sales revenue isn’t a good metric for manager potential, what is? The authors write:

We provide evidence that the Peter Principle may be the unfortunate consequence of firms doing their best to motivate their workforce. As has been pointed out by Baker et al. (1988) and by Milgrom and Roberts (1992), promotions often serve dual roles within an organisation: they are used to assign the best person to the managerial role, but also to motivate workers to excel in their current roles. If firms promoted workers on the basis of managerial potential rather than current performance, employees may have fewer incentives to work as hard.

We also find evidence that firms appear aware of the trade-off between incentives and matching and have adopted methods of reducing their costs. First, organisations can reward high performers through incentive pay, avoiding the need to use promotions to different roles as an incentive. Indeed, we find that firms that rely more on incentive pay (commissions, bonuses, etc.), also rely less on sales performance in making promotion decisions. Second, we find that organisations place less weight on sales performance when promoting sales workers to managerial positions that entail leading larger teams. That is, when managers have more responsibility, firms appear less willing to compromise on their quality.

Our research suggests that companies are largely aware of the Peter Principle. Because workers value promotion above and beyond a simple increase in salary, firms may not want to rid themselves entirely of promotion-based incentives. However, strategies that decouple a worker’s current job performance from his or her future career potential can minimise the costs of the Peter Principle. For example, technical organisations, like Microsoft and IBM have long used split career ladders, allowing their engineers to advance as individual contributors or managers. These practices recognise workers for succeeding in one area without transferring them to another.

This article is republished with permission from Marginal Revolution.