The Myth That the US Leads the World in Mass Shootings

The US trails many other advanced nations in mass shooting frequency and death rate.

If you asked me this morning which nation has the most mass shootings in the world, I would have said, with perhaps a flicker of hesitation, the United States.

This is a tad embarrassing to admit because I’m pretty familiar with shooting statistics, having written several articles on gun violence and the Second Amendment. Below is a basic overview of gun violence in America. While gun homicides have been steadily declining for decades in the US, mass shootings have indeed been trending upward. 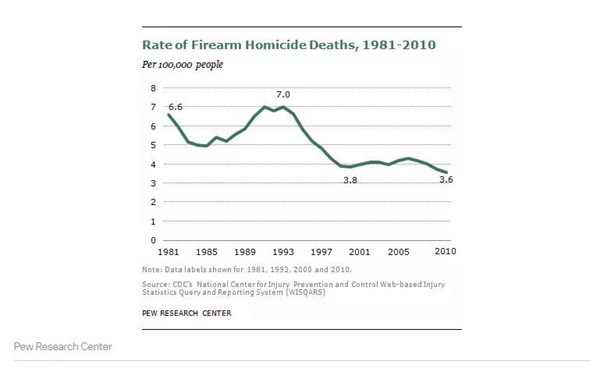 This fact alone probably would not have led me to believe that the US leads the world in mass shootings, however. An assist goes to the US media and politicians.

"Let's be clear,” President Obama said in 2015 after a shooting in North Carolina. “At some point, we as a country will have to reckon with the fact that this type of mass violence does not happen in other advanced countries."

Sen. Harry Reid echoed this sentiment. "The United States is the only advanced country where this kind of mass violence occurs.”

Media headlines have left little doubt that the US leads the world in mass shootings. In fact, according to CNN, it isn’t even close. 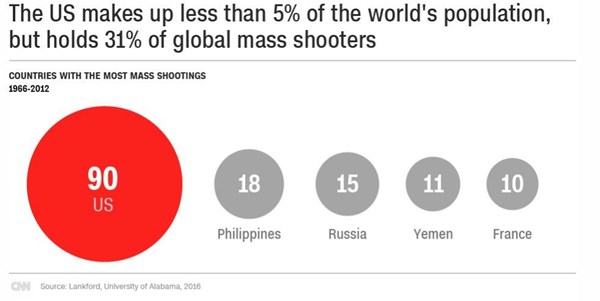 The comments and data seem to conclusively say that the US leads the world in mass shootings and the violence is unique, a product of “America’s gun culture.”

It’s a slam dunk case except for one thing: it’s not true.

The Root of the Myth

Statistics on global mass shooting incidents from 2009 to 2015 compiled by economist John Lott of the Crime Prevention Research Center show that the US trails many other advanced nations in mass shooting frequency and death rate. 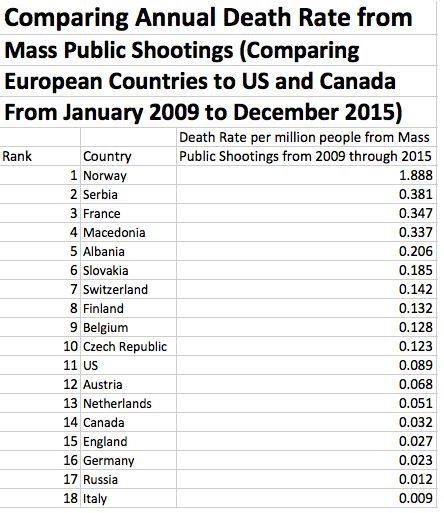 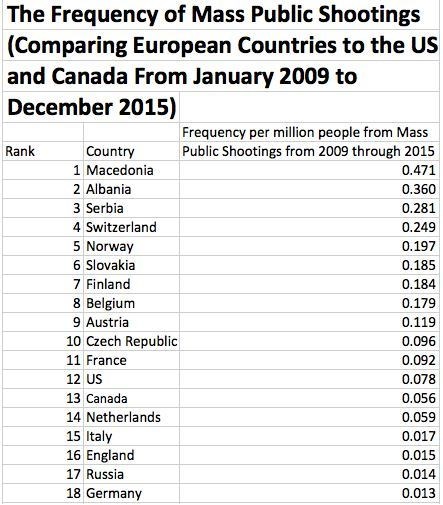 As Investor’s Business Daily noted on these findings, “Yes, the U.S. rate is still high, and nothing to be proud of. But it's not the highest in the developed world. Not by a long shot.”

If this is true, how did the narrative that the US leads the world in mass shootings become the conventional wisdom? The myth, it turns out, stems from University of Alabama associate professor Adam Lankford.

Lankford’s name pops up in a montage of media reports which cite his research as evidence that America leads the world in mass shootings. The violence, Lankford said, stems from the high rate of gun ownership in America.

Lankford’s findings show that there were 90 mass public shooters in America since 1966, the most in the world, which had a total of 202. But Lott, using Lankford’s definition of a mass shooting—“four or more people killed”—found more than 3,000 such shootings, John Stossel recently reported.

Who is to say Lankford doesn’t have it right and Lott is wrong? There’s just one problem: Lankford isn’t talking.

When findings do not mesh, scholars, in pursuit of truth, generally compare notes, data, and methodology to find out how they reached their conclusions. After all, who is to say Lankford doesn’t have it right and Lott is wrong? There’s just one problem: Lankford isn’t talking.

Lankford refuses to explain his data to anyone—to Stossel, to Lott, to the Washington Post, and apparently anyone else who comes asking, including this writer. (I emailed Lankford inquiring about his research. He declined to discuss his methodology, but said he would be publishing more information about mass shooting data in the future.)

[Editor's Note: Lankford has since published his research. It can be found here.]

Indeed it is. Yet, it doesn’t explain how one professor’s research was so rapidly disseminated that its erroneous claim quickly became the conventional wisdom in a country with 330 million people.

For that, we must look to the era of narrative-driven journalism and the politicization of society, both of which subjugate truth to ideology and politics. Media and politicians latched onto Lankford’s findings in droves because his findings were convenient, not because they were true.

This is an unsettling and ill omen for liberty. As Lawrence Reed has observed, the road to authoritarianism is paved with a “careless, cavalier, and subjective attitude toward truth.” Yet that is precisely what we see with increasing frequency in mass media. (Need I reference the Covington debacle and the Smollet hoax?)

More than a hundred years ago Mark Twain noted, "A lie can travel halfway around the world while the truth is putting on its shoes."

Lankford’s erroneous research had free rein for two years and was disseminated to tens of millions of viewers and readers before the truth finally got its shoes on.

Twain’s quote remains true even in the age of the internet. Lankford’s erroneous research had free rein for two years and was disseminated to tens of millions of viewers and readers before the truth finally got its shoes on.

If you ask most Americans today which country leads the world in mass shootings, I suspect a vast majority would say the US. And there’s always a price for the erosion of truth.