The Myth of U.S. Prosperity during World War II

World War II, the so-called Good War, has been a fount of historical fallacies. One of the greatest—and one of the most pernicious for subsequent policymakers—is the notion that prosperity prevailed during the war. Although Americans might have been dying in the Pacific and European theaters of war, people on the home front actually benefited from the war, because it propelled the economy at long last out of the Great Depression. This view of the war would be sufficiently egregious if it were true, but despite the claims of historians for the past half century, it is not true.

For most people, the myth of wartime prosperity rests on selective memory or, for the younger generations, on miseducation. Those who lived through the war at home recall the warm social solidarity; the “pitching in” to collect scrap metal, rubber, fats, and waste paper; and the ready availability of jobs in munitions plants. They forget the scarcity of decent housing, the hassles in commuting to work, and the severe rationing or complete absence of basic consumer goods. Younger generations have been given accounts featuring legions of strong, cheerful women assembling bombers, almost as if the war had been more a giant step in the long march of women’s liberation than a global orgy of death and destruction.

Economists and historians, who have studied the home front more systematically, have succumbed to different sorts of errors. In general, they have claimed that prosperity prevailed during the war because unemploy­ment nearly disappeared, because national production soared, and because even per­sonal consumption increased. None of these claims holds water when examined carefully.

Yes, official unemployment did nearly disappear, falling from 14.6 percent of the civilian labor force in 1940 to just 1.2 percent in 19441. Wh at the or thodox account neglects, however, is that during that same period the government, mostly by conscription, increased the active-duty personnel of the armed forces by 11 million persons, equivalent to almost 20 percent of the total labor force (employed plus unemployed) in 1940.2 If a nation shoves 11 million persons into military service and, as a result, reduces the number of unemployed persons by eight million, that performance scarcely signifies the achievement of true prosperity.

Yes, national output as conventionally measured did grow hugely during the war. As shown by the figure (pdf, p.36), gross domestic product (in constant 1987 prices) increased by 84 percent between 1940 and 1944.3 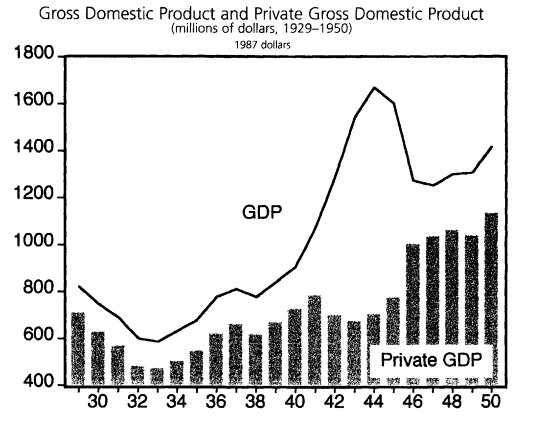 What the orthodox account neglects, however, is that this “miracle of production” consisted entirely (and then some) of increased government spending, nearly all of it for war materials and equipment and military per­sonnel. The private component of GDP (consumption plus investment) actually fell after 1941, and while the war lasted, private output never recovered to its pre-Pearl Harbor level. In 1943, real private GDP was 14 percent lower than it had been in 1941. If a nation produces an abundance of guns and ammunition, it does not thereby achieve genuine prosperity. As the figure shows, only after the war ended did the private economy—the part of the economy that directly or indirectly satisfies freely expressed consumer demands—recover fully from its 15-year slump.

Nor did personal consumption flourish during the war, notwithstanding historians’ claims of a “carnival of consumption.”4 Because the government imposed comprehensive price controls during the war, and thereby encouraged pervasive black-market activity, official price indexes failed to record the true amount by which actual prices increased. Thus the increase of “real” (that is, inflation-adjusted) consumption spending during the war was overstated substantially. When even a conservative adjustment is made for this mismeasurement, the conclusion is that “real consumption per capita reached a pre-war peak in 1941,… declined by more than 6 percent during 1941-1943 and rose during 1943-1945; still, even in 1945 it had not recovered to the level of 1941.”5 Because of the many other ways that the well-being of consumers deteriorated during the war, which the official data fail to capture, actual wartime conditions were even worse than these figures suggest.6