The Male-Only Draft May Be Unconstitutional, but Conscription Itself Is Unjust

It’s time we abolish the idea of military conscription altogether. 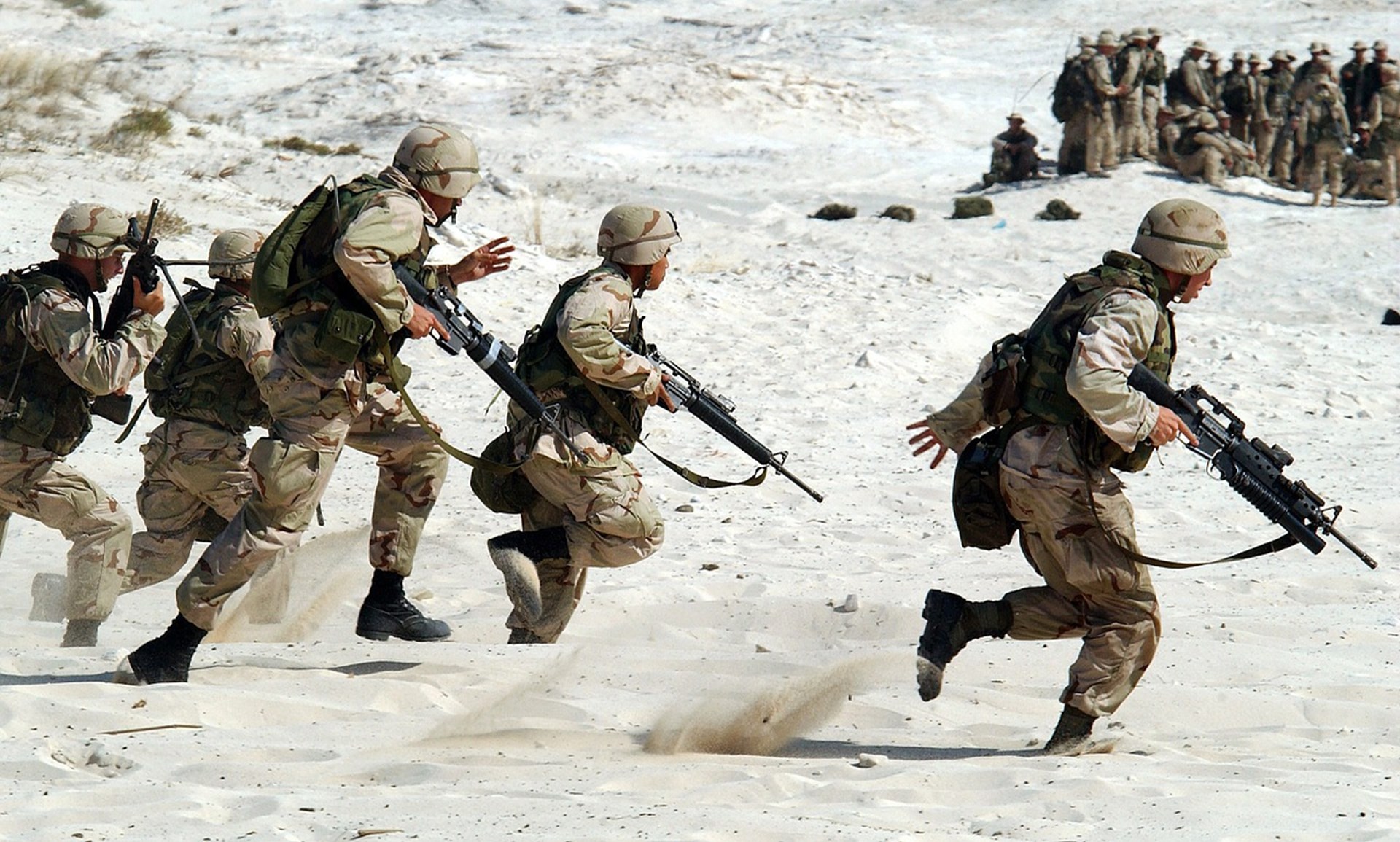 In 1981, the U.S. Supreme Court ruled that women could be exempt from the military draft since they were excluded from combat duty. But in 2015 Defense Secretary Ash Carter announced he would lift the military’s ban on women serving in combat, a move that allowed hundreds of thousands of women to serve in front-line positions during wartime. The next year the top officers in the Army and Marine Corps followed that policy to its logical conclusion and told Congress that it was time for women to register for future military drafts.

On Friday, U.S. District Judge Gray Miller applied the inevitable legal reasoning in saying that a law requiring men but not women to register for the military draft is unconstitutional. “If there ever was a time to discuss ‘the place of women in the Armed Services,’ that time has passed,” wrote Judge Miller in his ruling.

The judge is partially right. If we are going to have a military draft and women are eligible for combat (an idea I vehemently oppose), then it’s only fair that women be forced to serve alongside men. But rather than follow this bizarre standard of “equality” to its natural conclusion, we should instead recognize it’s time we abolish the idea of military conscription altogether.

How the U.S. Military Became All-Volunteer

The U.S. Constitution requires Congress to "raise and support Armies” in order to "provide for the common defense.” What it doesn’t specify, however, is how the military should be "raised.” There are, in fact, only three options available: all-volunteer, forced conscription, or some combination of the two. Currently, our military is an all-volunteer force, a model that has proven not only to be the most effective but which is also the most moral.

We have an all-volunteer military largely because of free-market economist Milton Friedman. At the height of the Vietnam War, U.S. commander Gen. William Westmoreland testified before the President’s Commission on an All-Volunteer Force, a commission that was exploring the feasibility of ending the military draft. As Newsday reported:

Staunchly opposed to an all-volunteer military, which must pay its soldiers market wages, Gen. Westmoreland proclaimed that he did not want to command “an army of mercenaries.” One of the commission members immediately shot back with a question: “General, would you rather command an army of slaves?

Friedman based his arguments primarily on the need for freedom in human flourishing. But he also noted its effects on the lower classes:

A by-product of freedom to serve would be avoidance of the present arbitrary discrimination among different groups. A large faction of the poor are rejected on physical or mental grounds. The relatively well-to-do used to be in an especially good position to take advantage of the possibilities of deferment offered by continuing their schooling. Hence the draft bears disproportionately on the upper lower classes and the lower middle classes. The fraction of high-school graduates who serve is vastly higher than of either those who have gone to college or those who dropped out before finishing high school.

Some people, however, agree with Friedman and yet still believe an all-volunteer force is less moral than conscription—and for much the same reason he opposed it. They would argue that people on the lower rungs of the socio-economic ladder are more likely to be attracted to military service, while the upper classes have more options available to them and would therefore have less incentive to join.

We can call this the “burden model” since it implies that the burden of military service is disproportionately shared by the lower economic groups.

There are two problems I have with this burden model of military service. The first is the way it reduces service to one’s country to a matter of economics: Those with fewer choices for jobs or education are more likely to enlist, while those who have money and more options to choose from will avoid military service. Under this view, the military is attractive to those with limited opportunities, while those with a broader range of selections will find it significantly less alluring.

It is the people making the choice who are morally flawed.

A primary flaw in this claim is that it is not true. Most members of the military come from middle-class neighborhoods. But even if it were true that the poor made up the bulk of the military, the unequal representation of the socio-economic classes would not be inherently immoral. I myself was on the borderline between poor and lower middle class when I joined the Marines in 1988. But economic advancement was not the reason I joined, or why I stayed in for 15 years. Nor was it the reason most people I knew joined the military.

But even if it were true that most people joined for economic reasons, I would still reject the burden model since it implies that the system is immoral when it is the people making the choice who are morally flawed.

Which brings me to the second problem with the model. It concludes that since military service is a burden, moral considerations require that the load be shared as equally as possible. Again, I must point out that this view is not inherently wrong. But where I think the flaw in reasoning lies is that it puts the focus on the ethical choice rather the ethical chooser.

The "burden” of military service is akin to that of a person who chooses to adopt a child. While choosing to become a mother or father has obvious economic consequences, few people see that as the sole reason for adopting an unwanted or abandoned child. Before they are adopted, orphans are cared for by the state and are, therefore, the collective responsibility of all citizens. But when someone steps forward and agrees to take the child into their home, the burden of responsibility shifts mainly onto the shoulders of the new parent. Although the state may still have some obligations, the parent assumes the primary childcare duties.

The core is comprised of men and women who truly love their country.

We do not, however, consider the system to be immoral because the state does not force people to take in orphans. Instead, we allow people with the requisite virtues (love, compassion, self-sacrifice) to freely and willingly choose to take this "burden” upon themselves.

The same holds true for those who serve in the military. Currently, our nation does not and should not force the obligation of national defense on those who do not willingly choose to take it upon themselves. Instead, we allow those who possess certain moral virtues (courage, honor, commitment) to heed the call of duty.

Not all who serve, of course, do so for the purest of motives. There is no shortage of “scholarship mercenaries” who joined only to gain money for college or as a means of improving their post-military vocational options. But these people, no matter how large their number, are not the heart and soul of our military. The core is comprised of men and women who truly love their country. They love the people and the ideals for which our nation stands so much they are willing to sacrifice and bear any burden in order to ensure its survival.

The Draft Is Neither Necessary nor Desirable

As a Christian, I believe that since no one meets the standards of goodness set by God, no one should be excessively proud of their virtue. Compared to the ultimate standard, even the greatest of saints falls short. But this view should not be mistaken as an endorsement of moral egalitarianism. All men are created equal and should be afforded the same human rights, but not all men are equally virtuous. The cost of liberty is not paid by everyone equally; it is a debt assumed by a select few.

In our nation, our standards for what is considered elite are based not on virtues such as courage, duty, and self-sacrifice, but rather on money, power, and education.

If Americans truly value freedom as much as they claim, then the military should be more difficult to get into than any Ivy-league school. The "elite” would be lined up around the block, letters of recommendation in hand, hoping to enlist and serve in the greatest military in the history of the world. But in our nation, our standards for what is considered elite are based not on virtues such as courage, duty, and self-sacrifice, but rather on money, power, and education.

That is why the draft is neither necessary nor desirable. Conscription may be necessary to force the wealthy and privileged to share the "burden” of duty. But conscription has never been needed to attract the virtuous. If the United States ever reaches the point where conscription is truly necessary, if we get to a stage when we no longer produce enough men and women to heed the call to defend our country, then we will no longer have a country worth defending.