Today, abundance is no longer restricted to the West.

Earlier this year, the Groningen Growth and Development Centre released a new edition of its Maddison Project Database, which provides information on global growth and income levels over the long run.

The 2018 version of the data covers 169 countries up to the year 2016. Some information, dealing with parts of Europe and the Middle East, goes back to the time of Christ. It provides a stunning window on humanity’s struggle to generate and sustain rapid economic growth, until recent centuries ushered in the current Age of Abundance.

The numbers were first compiled by the late University of Groningen economics professor Angus Maddison. In 1995, he published GDP estimates for 56 countries going as far back as 1820. In 2001, he extended his estimates to the beginning of the Christian Era. To some, Maddison’s numbers are “no more than educated guesses.” To others, they are “fictions, as real as the relics peddled around Europe in the Middle Ages.” But Maddison’s research served an important purpose. “In disputing his figures, The Economist predicted future “scholars would be inspired to provide their own.” And so it proved to be.

The Maddison Project started in March 2010, when a group of Maddison’s colleagues decided to continue the Briton’s work on measuring economic performance for different regions and time periods. The latest edition of the GDP data was five years in the making, and while the numbers have changed, the economic growth trend lines have stayed the same.

As in previous editions of the data, human economic history resembles a hockey stick. For thousands of years, economic growth was negligible (resembling a hockey stick’s shaft). At the end of the 18th century, however, economic growth and, consequently, the standard of living, started to accelerate in Great Britain and then in the rest of the world (resembling the upward-facing blade). 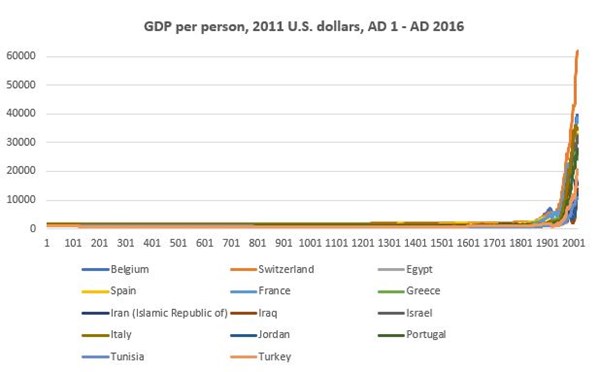 That the early data should be most readily available for the constituent parts of the Roman Empire and Mesopotamia is unsurprising, since documentary and archeological evidence from those two regions is plentiful. According to the researchers at GGDC, annual real (or inflation-adjusted) income per person around the time of Octavian (63 BC–AD 14) varied from $1,546 in Italy to $973 in Spain. That amounts to between $4.2 and $2.7 per person per day.

It is a testament to the unevenness of economic development that, over two millennia later, some countries are still stuck at those (and even lower) levels. In 2016, GDP per person in Burundi, Central African Republic, Democratic Republic of Congo, Liberia, Malawi, and Niger was $692, $619, $836, $764, $950, and $906 respectively.

Those countries are outliers, of course. In most of the world, GDP per capita has risen dramatically, especially over the last two centuries. To get a sense of how recent and unprecedented the Age of Abundance is, consider France. In AD 1, GDP per person in the Roman province of Gaul was $1,050—and that’s where it remained for the next 13 centuries. During the first half of the 14th century, however, French incomes rose by some 50 percent, reaching a high of $1,553 in 1355. Why?

The end of the Medieval Warm Period in the late 13th century led to cooler weather and higher rainfall. Harvests shrunk and famines proliferated. To make matters much worse, the Black Plague (1347-1351) wiped out between 75 and 80 percent of those French who survived the climate change. Curiously, the two catastrophes had a salutary effect on both the economic and institutional developments in Western Europe. Abundance of land and agricultural tools seemed to have increased productivity of the surviving peasants, while labor shortages encouraged the lower classes to demand better treatment from their feudal overlords. As a consequence, serfdom gradually disappeared from the region, although it persisted in Eastern Europe, where the Black Plague was, due to lower population density. 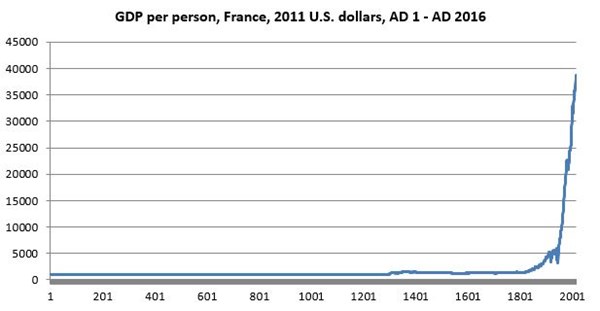 As the population of Western Europe recovered, incomes waxed and waned, neither falling to their pre-plague levels, nor rising above their mid-14th-century maximum. Thus, as late as 1831, the average GDP per person in France was only $1,534. Put differently, in the 18 centuries that separated the reigns of the first Roman Emperor and the last French king (Louis Phillipe), incomes rose by a paltry 50 percent. The Industrial Revolution, a British import, changed French fortunes considerably. Between 1831 and 1881, incomes rose by 100 percent (to $3,067). In other words, France made twice as much economic progress in 50 years as it did in the previous 1,800 years. In 2016, French GDP per capita stood at $38,758, meaning that a modern Frenchman is roughly-speaking 24 times better off (in real terms) than his ancestor 200 years ago. A remarkable transformation.

France, of course, was not alone. The same was true across the West. A year before the Declaration of Independence, American GDP per person stood at $1,883. By the time Barack Obama left office, it was $53,015—a 27-fold increase.

Abundance around the Globe

Today, abundance is no longer restricted to the West. As previously under-developed countries embraced industrialization and trade, they prospered. In 1978, when China started to reform its failing communist economy, its GDP per person stood at $1,583 (the same level as France in the early 1830s). By 2016, it had risen to $12,320 (the French level in 1964).

To put that progress in perspective, China grew as much in 38 years as France did in 130 years. That, too, is noteworthy, for it demonstrates that countries don’t have to reinvent the wheel. They just need the right policies. And they have the advantage of adopting ideas and technologies that took advanced countries millennia to develop and leapfrog from extreme poverty into the Age of Abundance within a couple of generations.