The Luddites Were Wrong Then and They're Wrong Now

The economic growth that got going in the mid-1800s compounded to the mass prosperity of today. 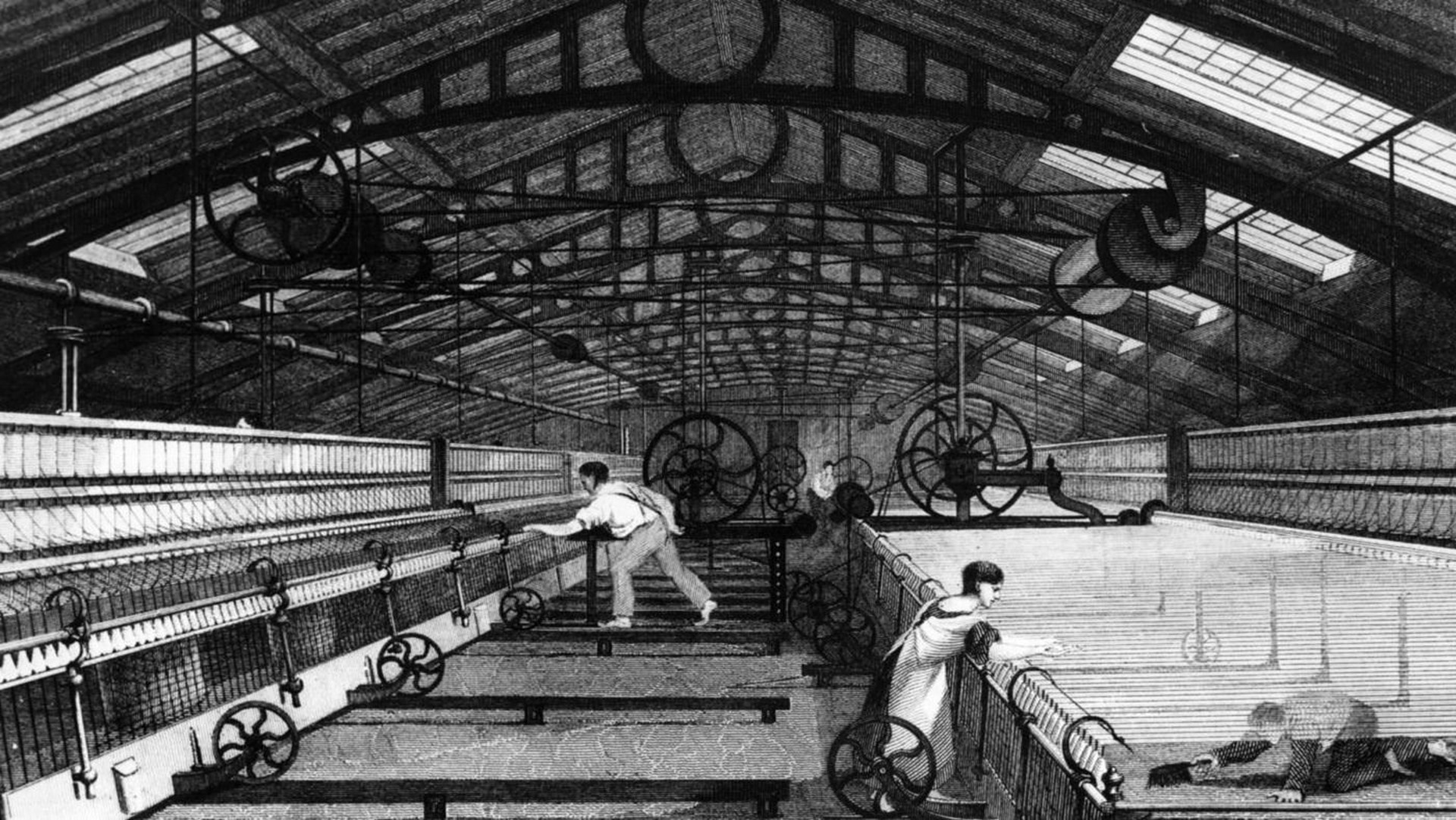 When Joseph Whitworth was growing up in Stockport, the man who became the greatest mechanical engineer of the Victorian age witnessed a traumatic sight. In 1812, this unlovely industrial town on the outskirts of Manchester was overrun by Luddite rioters, all the more terrifying as they were wearing women’s clothes as they went on the rampage, smashing power looms and burning down textiles mills. Many of the Luddites were later hanged, their protest against new technology in vain.

Today, the impact of new technology on jobs and social order is as burning a political and economic question as it was in the 19th century. In recent years, millions of Americans and others around the world have lost their jobs in manufacturing, their disaffection helping to propel Donald Trump to the White House.

There seem to be increasingly few jobs that a computer cannot do better than a mere human being, from flipping burgers to driving a lorry or processing an insurance claim. Whitworth, who lived from 1803 to 1887, was at the heart of a similar Victorian debate.

Less celebrated than Brunel or Stephenson, Whitworth’s impact was arguably more important than these better-known figures. Together with other mechanical engineers such as Henry Maudslay, Richard Roberts, and James Nasmyth, Whitworth pioneered a manufacturing revolution that saw Great Britain transformed from a craft economy to full mechanization in the space of two generations. Without this, the railways could not have come into being, the textiles industry would not have become so dominant, and shipbuilding would not have evolved into a great industry.

When Whitworth started out, the main tools used in the primitive factories of London, Birmingham, and Manchester were hammer and chisel, wielded by hand. The UK’s craftsmen were highly skilled, but standards of accuracy were poor. Mass production was at a rudimentary stage. By the time of the Great Exhibition in 1851, when Whitworth carried off more prizes for engineering excellence than anyone else, all had changed: the UK was the undisputed workshop of the world.

It wasn’t until Whitworth completed the job in the 1860s, that there were standard measures for nuts and bolts

The mid-century was the age of machinery: machines operated to unprecedented levels of precision. Whitworth designed one that could measure down to a millionth of an inch, admired at the Great Exhibition by Prince Albert and Charles Dickens. He pioneered machine tools, the lathes, boring, planing, milling, drilling and slotting machines and so forth that replicated tasks traditionally carried out by hand. These were sold by the ton from his factory in the heart of Manchester, near Piccadilly Station.

His great rival and fellow Manchester industrialist, James Nasmyth, also won a prize for his steam hammer, an archetypal machine tool that was a source of wonderment to contemporaries as it combined power with delicacy: it could bash a giant red-hot girder into shape as well as be brought to rest on top of a wine glass. This technology was adapted to make the pile driver, a machine that transformed Victorian civil engineering and is still in use on building sites today.

Mass production became a reality as did interchangeable components – the notion that you could make parts for an engine or a ship or a railway carriage in different factories and they would all fit together. Remarkably, it wasn’t until Whitworth completed the job in the 1860s, that there were standard measures for nuts and bolts, the most basic manufacturing components. The Whitworth Standard was in place in much of the world until after the Second World War.

Contemporaries viewed mechanization, the 19th-century equivalent of automation, with a mixture of horror and awe. We are familiar with the lurid descriptions of the industrial north in the novels of Charles Dickens or Elizabeth Gaskell, but less so with the wonderment people felt when they saw the machinery at work.

In the mid-twenties, the Manchester engineer Richard Roberts invented the self-acting mule, a machine that more or less completely automated the fiendishly complicated task of spinning yarn. “I have stood for hours admiring the precision with which the self-actor executes its multifarious successions and reversals of movement,” gushed one observer. The machine was dubbed the Iron Man because it seemed to move and think as if it were a human being.

The Iron Man was invented at the request of Manchester mill-owners who were fed up with the power of their workers to hold production to ransom and demand ever higher wages. As today, one of the motivations for the new technology was to cut costs and eliminate the need for troublesome human labor.

James Nasmyth retired from business in the 1850s after a bruising strike, complaining that workers were feckless and failed to turn up for work, while machines “never got drunk, their hands never shook from excess, they were never absent from work, they did not strike for wages [and] they were unfailing in their accuracy and regularity”. With the help of machinery, he reduced the workforce at his Patricroft factory near Manchester by half.

Brute force is set aside, and the eye and the intellect of the workman are called into play

But, echoing today’s debates, there was another perspective. Whitworth celebrated the fact that mass production brought prices down dramatically: the cost of making a surface of cast iron true with hammer, chisel, and file was 12s per square foot, compared to labor costs of less than one penny if a planing machine were used. Likewise, the price of a 29-yard bolt of printed cloth fell from 30s 6d to 3s 9d.

This spectacular reduction in costs brought benefits to society at large, he contended. Staple goods became cheaper, and there would be more leisure time for workers and less need for strenuous manual labor. The technology created new and better jobs for working people, and wages could go up.

Even Nasmyth agreed. “Brute force is set aside, and the eye and the intellect of the workman are called into play,” he said. “All that the mechanic has to do now, and which any boy or lad of 14 or 15 is quite able to do, is to sharpen his tool, place it in the machine in connexion with the work, and set on the self-acting motion, and then nine-tenths of his time is spent in mere superintendence, not in labouring, but in watching the delicate and beautiful operations of the machine.”

By the middle of the 19th century, British engineering had become capital – rather than labor – intensive. Businesses had become larger, and more dependent on expensive equipment and less on an aristocracy of skilled labor. The roots of the UK’s notoriously poor industrial relations were established.

Whitworth himself was sent by the government to examine American manufacturing practices after the Great Exhibition. He found American workers embraced innovation, while the British resisted change and shared some of the destructive tendencies of their Luddite forebears.

A strange and obsessive man, with the looks of a baboon (according to Jane Carlyle), Whitworth had strong humanitarian concerns for his own workforce, installing public baths near his factory, while he was alive giving away a stupendous £100,000 to fund 30 technical scholarships.

Karl Marx saw the mechanization pioneered by Whitworth and his peers as dehumanizing and spiritually impoverishing.

In 1874, he converted his business into a limited liability company and became a pioneer of worker democracy, sharing control with 23 senior staff, and encouraging ordinary operatives to invest £25 in shares. When he died childless in 1887, he left £600,000 to fund his favorite causes. This is the equivalent of Bill Gates-style munificence in our own age, and his philanthropy benefits the students of Manchester University to this day, as well as the park and the magnificent gallery that bears his name.

Thomas Carlyle, Charles Dickens, and Karl Marx saw the mechanization pioneered by Whitworth and his peers as dehumanizing and spiritually impoverishing. But for all the poverty and squalor associated with rapid industrialization, the expanding population enjoyed enduring improvements in living standards, and the economy began to grow at an unprecedented rate. In the long run, writes the economist Robert C Allen, the economic growth that got going in the mid-1800s “compounded to the mass prosperity of today.”

The lesson for today is that technological innovation can be extremely painful, but that over the longer term it does not necessarily come at the price of jobs or prosperity: indeed, new technology begets further innovation that creates wealth and employment in entirely unforeseeable ways. This was not appreciated by the frock-wearing Luddites of the early 19th century, nor is it understood by their spiritual heirs two centuries later.

David Waller is an author, business consultant and former Financial Times journalist specialising in business and the nineteenth century. He is the author of "Iron Men: How One London Factory Powered the Industrial Revolution and Shaped the Modern World" (Anthem Press).