The Light That Blinks in the Far East 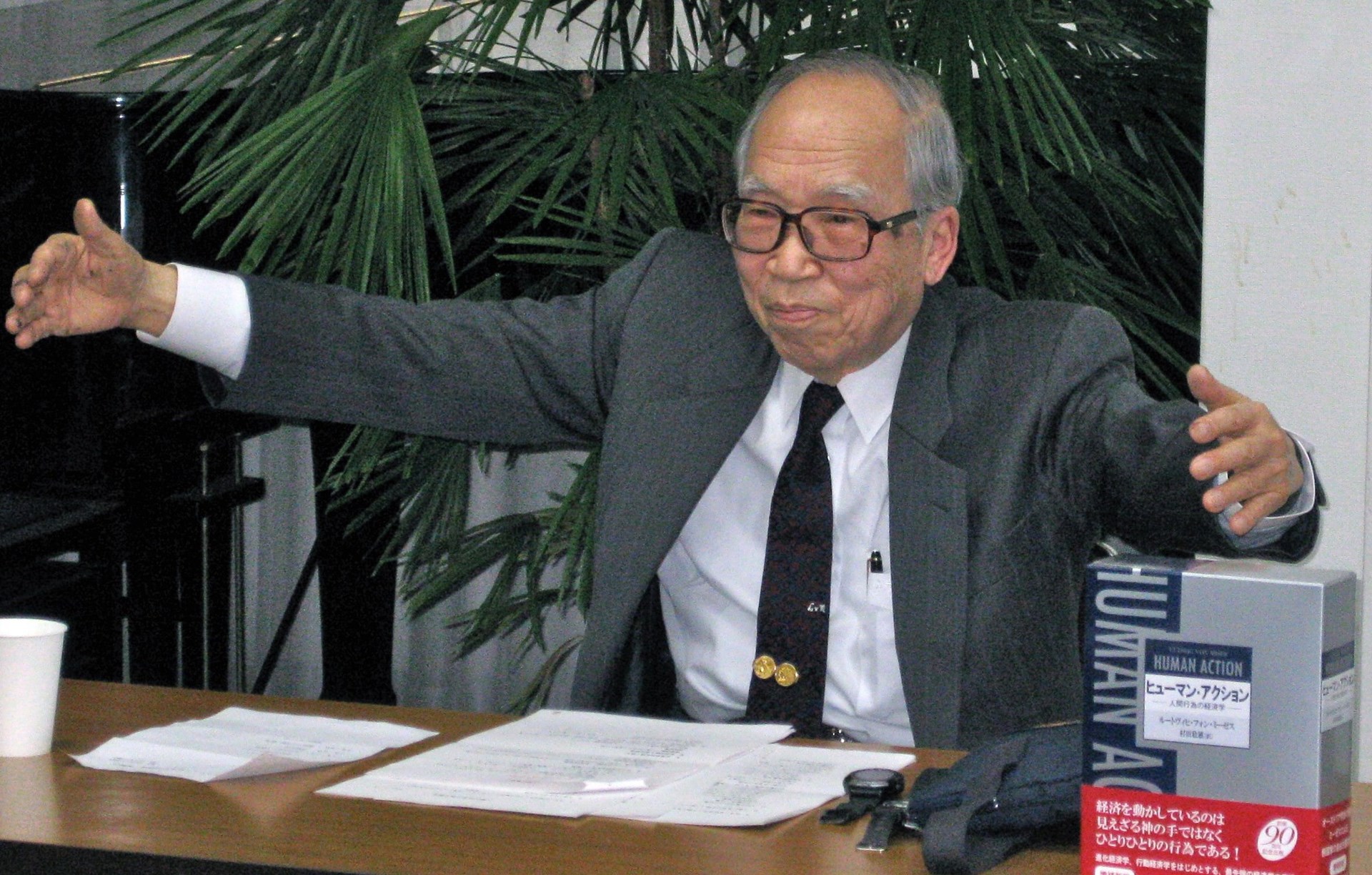 Seven thousand miles from the Atlanta headquarters of the Foundation for Economic Education (FEE) blinks a light that never quits. Its name is Toshio Murata, a master teacher (or “sensei” in Japanese) if ever there was one!

In October 2017, Toshio will turn 94. To recognize his singular contributions in introducing to his native Japan an understanding of free markets in general and the principles of “Austrian” economics in particular, FEE is proud to present him with an early birthday gift: our 2017 “Blinking Lights” Award.

Toshio is the third recipient of this honor, the origin and history of which is explained here. The first awardee (in 2014) was Britain’s Linda Whetstone and the second (in 2016) was Bob Chitester of Erie, Pennsylvania. Recipients are chosen because the vital link between personal character and a free society is a defining principle of their lives. Through their words and deeds, they work tirelessly as both exemplars and advocates for such lofty ideals as freedom, individual responsibility, respect for life and property, sound economics and the courage required to speak truth to power. Each recipient is, by definition, a model and an inspiration.

Shortly after I became president of FEE in September 2008, an unexpected overseas package arrived addressed to me. Inside was an autographed copy of Toshio’s monumental Japanese translation of Ludwig von Mises’ magnum opus, Human Action. It is one of my most treasured possessions, sent by the man we honor now with this richly deserved distinction.

To Toshio himself, I offer hearty congratulations from all of us at FEE. Ken Schoolland, president of Liberty International, is a long-time friend of both FEE and of Toshio. “Professor Murata introduced me to the rich legacy of libertarian thought in Japan,” Ken tells me. “His work incorporated and disseminated the great wealth of Austrian economics. I am also grateful to Murata-sensei for the translation and publication of the Japanese edition of my book, The Adventures of Jonathan Gullible: A Free Market Odyssey.”

One of the institutions inspired by Toshio Murata in Japan is the Free Economy Institute (Japanese only at this moment) in Tokyo. I recently invited FEI’s Hiroshi Yoshida to write a few words about our friend Toshio. They appear below.

To Toshio himself, I offer hearty congratulations from all of us at FEE, and a heartfelt thank you for a lifetime of excellent work on behalf of liberty and sound economics.

Toshio Murata served as a pay officer during World War II. After he was discharged from his military service, he devoted himself to looking for the best path for the economic development of post-war Japan. During this quest, he encountered Human Action by the distinguished Austrian economist Ludwig von Mises. It provided the path he was looking for and taught him the critical importance of free markets.

Starting in 1957, Toshio published Jiyu to Keizai (Liberty and Economy) for the purpose of diffusing the principles of liberty in Japan. Printed by mimeograph, this was the only libertarian newspaper in Japan in those days. He arranged a special contract with FEE to translate and reprint FEE’s articles and other publications.

One of the readers of Jiyu to Keizai recommended to Toshio that he apply to the William Volker Fund for assistance, which resulted in the Fund awarding him a scholarship to study at the New York University Graduate School of Business Administration. There, he studied directly under Mises and interacted with the staff of FEE nearby at its Irvington, New York location. Mises himself arranged with FEE’s founder and president Leonard E. Read to hire Toshio as a member of the FEE staff. Toshio fondly recalls Leonard’s kindness and generosity because it afforded him great intellectual stimulation as he finished his master degree at NYU after just one year of study. Leonard later hung a portrait of Murata on the wall of the FEE lecture room to honor FEE’s best student from Japan.

When Mises passed away on October 10, 1973, his faithful student Toshio Murata made an important decision. Many U.S. friends of Toshio advised him to stay in the U.S. and study for his doctorate but he decided to go back to Japan where his family was waiting for him. In 1962, he started teaching at Kanto Gakuin University in Yokohama, where the university’s economics faculty was dominated by Marxist thought. He was a “blinking light” on the campus amid the darkness of bad ideas, and his light never flickered for a moment.

In 1969, Toshio moved to Yokohama College of Commerce on the condition that he would be given permission to give lectures on Mises and Austrian Economics. There, he eventually served as a dean. During his tenure, he translated “The Ultimate Foundation of Economic Science” by Mises into Japanese. Excerpts appeared as articles in magazines in Japan and later the book as a whole was published.

When Mises passed away on October 10, 1973, his faithful student Toshio Murata made an important decision. He resolved to make the diffusion of the ideas of Mises in Japan as his life's mission. It was his 50th birthday.

A revised version of Toshio’s Japanese translation of “Human Action” was published in 2008. In 2014, even a Kindle version became available. In 2014, Toshio permitted the Free Economy Institute to put Mises's “Economic Policy” in Japanese and upload into the public domain so as to attract many more new readers.

Mises passed a “torch of liberty” to Toshio Murata in Japan. It is our responsibility as succeeding generations to keep the flame of liberty going, and hand it over to our children and grandchildren.

Hiroshi Yoshida is an award-winning Certified Public Accountant and Licensed Tax Accountant with a Ph.D. in Policy Studies from Chiba University of Commerce. He is the President of The Institute of Public Sector Accounting and of The Free Economy Institute in Japan.