The Independent Workforce Is Taking Over

Our public policies were designed to function in the traditional labor market, and many of them are misguided or already have serious flaws.

The days are long past when a person worked from 9 to 5 at the same company for the entirety of their working lives. The ways people earn money are changing, and understanding these new dynamics is key to developing a policy environment that allows new business models and innovations to thrive. A new survey from the McKinsey Global Institute sheds some welcome light on this issue, and in addition to helping to answer who is in the growing independent workforce, they help explain how and why these people participate.

Young people make up almost a quarter of the independent workforce.Researchers surveyed roughly 8,000 people from the United States and some European. They excluded what they call “fissured workers” or the people involved when companies use vendors or subcontractors to fulfill non-core functions like technical support or security, because these individuals “are expected to keep regular work schedules with little autonomy, and they have a continuous relationship with their employer.”

Segmentation of Independent Workers in the United States 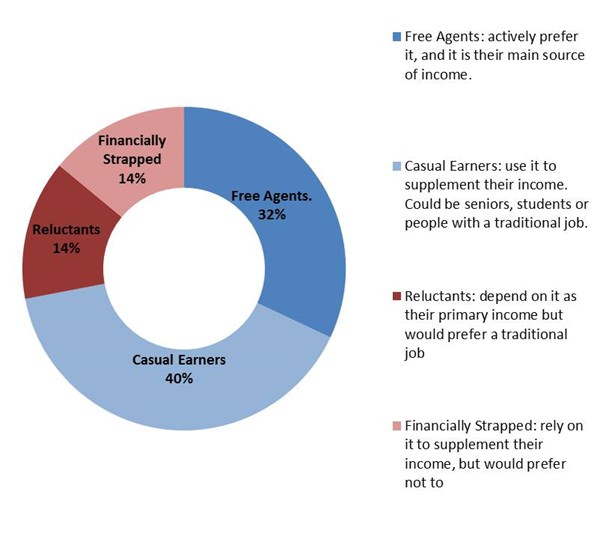 The largest segments in the U.S. are the casual earners and the free agents accounting for 72 percent of the total, which the McKinsey team dubs as participating “by choice” as opposed to “by necessity.” They enjoy being able to take advantage of the new options in independent work, and might be attracted to the autonomy and flexibility that it offers relative to a traditional job. The “free agents” who choose these non-traditional ways to earn, report higher satisfaction that those who choose traditional jobs on 12 of 14 measures, and are equally satisfied when it comes to income security and benefits like health care. They report being more engaged in work, enjoy having control over hours, and the opportunities for learning, among other aspects. Casual earners who use independent work to supplement their other income also report higher satisfaction compared to people in traditional jobs by choice in things like independence, work atmosphere, and flexibility.

Reported Satisfaction of Independent Earners vs. People in Traditional Work 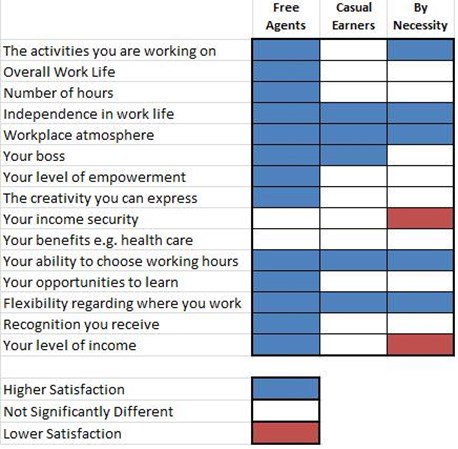 Unlike their peers who are in the independent workforce “by choice,” Reluctants and the Financially Strapped would either prefer finding a traditional job instead or a situation where their other sources of income proved sufficient, so they are in their situation “by necessity.” Even for this group, these independent work options do provide an outlet that can be an important way for them to get by while they explore ways to pursue their preferred path. Compared to people in traditional jobs “by necessity,” these people are less satisfied with income security and level of income, but do express higher satisfaction with flexibility, independence, and work atmosphere. For some of the people in this group, this is a temporary solution to bridge a tumultuous time, as illustrated by the fact that, among independent workers, 27 percent had such a spell in the preceding year, compared to only 15 percent among traditional workers.

Some of the recent growth in the independent workforce has been the rise of new digital platforms, and the authors suggest developments in that sphere could further transform the market for independent work by allowing for larger scales, richer information signals, and lower barriers to entry for new participants.

We don’t know what the future of work will look like, but we do know it won’t look the same as it did last century. Our public policies were designed to function in the traditional labor market, and many of them are misguided or already have serious flaws. With these new developments, they are also at risk of becoming increasingly out of date.

This first appeared at Cato at Liberty.