The Human Mind Is Our Most Precious Commodity

Some believe that the answer to scarcity is to limit consumption of natural resources. They're wrong.

Between 1960 and 2015, world population increased by 142 percent, rising from 3.035 billion to 7.35 billion. During that time, average income per capita adjusted for inflation increased by 177 percent, rising from $3,680 to $10,194. Moreover, after 56 years of human use and exploration, the vast majority of the commodities tracked by the World Bank are cheaper than they used to be – either absolutely or relative to income. That was not supposed to have happened.Out of the 42 distinct commodity prices measured by the World Bank, only 3 have increased relative to income levels.

According to conventional wisdom, population growth was to be a harbinger of poverty and famine. Yet, human beings, unlike other animals, innovate their way out of scarcity by increasing the supply of natural resources or developing substitutes for overused resources. Human ingenuity, in other words, is “the ultimate resource” that makes all other resources more plentiful.

Earlier this year, the World Bank updated its Pink Sheet, which tracks the prices of 72 commodities going back (in most cases) to 1960. I have eliminated some repetitive datasets and some datasets that contained data for only very short periods of time. I was left with 42 commodity prices, which are included in the chart below.

As can be seen, out of the 42 distinct commodity prices measured by the World Bank, 19 have declined in absolute terms. In other words, adjusted for inflation, they were cheaper in 2016 than in 1960. Twenty-three commodities have increased in price over the last 56 years. However, of those 23 commodities, only three (crude oil, gold, and silver) appreciated more than income. In a vast majority of cases, therefore, commodities became cheaper either absolutely or relatively. 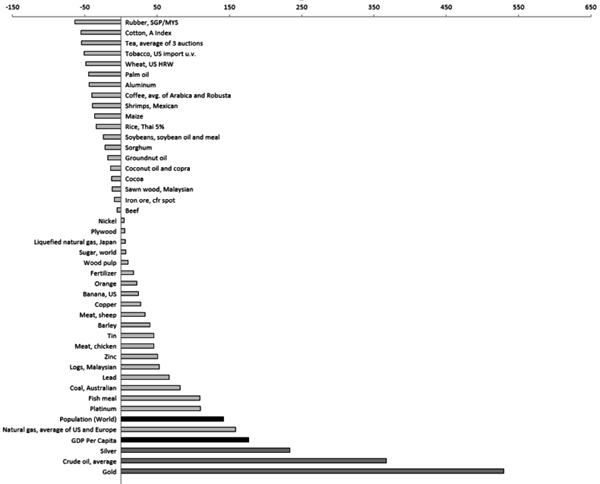 It is often assumed that population growth must inevitably result in the exhaustion of natural resources, environmental destruction, and even mass starvation. Take, for example, The Limits to Growth report, which was published by the Club of Rome in 1972.  Based on MIT computer projections, the report looked at the interplay between industrial development, population growth, malnutrition, the availability of nonrenewable resources and the quality of the environment. It concluded:

“If present growth trends in world population, industrialisation, pollution, food production, and resource depletion continue unchanged, the limits to growth on this planet will be reached sometime within the next 100 years… The most probable result will be a rather sudden and uncontrollable decline in both population and industrial capacity… Given present resource consumption rates and the projected increase in these rates, the great majority of currently nonrenewable resources will be extremely expensive 100 years from now.”

It has been 45 years since the publication of The Limits to Growth. So far, the dire predictions of the Club of Rome have not come to pass. On the contrary, we have seen an overall decline in commodity prices relative to income – in spite of a growing global population.

Can this happy trend continue for another 55 years and beyond? To get a glimpse of the future, we must first understand the concept of scarcity.

Scarcity or “the gap between limited – that is, scarce – resources and theoretically limitless wants”, is best ascertained by looking at prices. A scarce commodity goes up in price, while a plentiful commodity becomes cheaper. That was the premise of a famous bet between Stanford University Professor Paul Ehrlich and University of Maryland Professor Julian Simon. Ehrlich shared the gloomy predictions of the Club of Rome.

Unfortunately, many people believe that the answer to scarcity is to limit consumption of natural resources.

In his best-selling 1968 book The Population Bomb, Ehrlich reasoned that overpopulation would lead to exhaustion of natural resources and mega-famines. “The battle to feed all of humanity is over. In the 1970s hundreds of millions of people will starve to death in spite of any crash programs embarked upon now. At this late date nothing can prevent a substantial increase in the world death rate,” he wrote.

Simon, in contrast, was much more optimistic. In his 1981 book The Ultimate Resource, Simon used empirical data to show that humanity has always gotten around the problem of scarcity by increasing the supply of natural resources or developing substitutes for overused resources. Human ingenuity, he argued, was “the ultimate resource” that would make all other resources more plentiful.

In 1980, the two thinkers agreed to put their ideas to a test. As Ronald Bailey wrote in his 2015 book The End of Doom: Environmental Renewal in the 2lst Century:

“In October 1980, Ehrlich and Simon drew up a futures contract obligating Simon to sell Ehrlich the same quantities that could be purchased for $1,000 of five metals (copper, chromium, nickel, tin, and tungsten) ten years later at inflation-adjusted 1980 prices. If the combined prices rose above $1,000, Simon would pay the difference. If they fell below $1,000, Ehrlich would pay Simon the difference. Ehrlich mailed Simon a check for $576.07 in October 1990.  There was no note in the letter. The price of the basket of metals chosen by Ehrlich and his cohorts had fallen by more than 50 percent. The cornucopian Simon won.”

Simon’s critics, Ehrlich included, have since argued that Simon got lucky. Had his bet with Ehrlich taken place over a different decade, the outcome might have been different. Between 2001 and 2008, for example, the world had experienced an unprecedented economic expansion that dramatically increased the price of commodities.

True, but Simon’s thesis does not have to account for price fluctuations that are heavily influenced by the ups and downs of the global economy as well as disruptive government policies (eg, oil crises in 1973 and 1979). Rather, Simon posited that as a particular resource becomes scarcer, its price will increase and that will incentivise people to discover more of the resource, ration it, recycle it, or develop a substitute.

Commodity prices, academic research suggests, move in so-called “super-cycles,” lasting between 30 and 40 years. During periods of high economic growth, demand for commodities increases. When that happens, commodities go up in price. It is during this period that high commodity prices encourage the discovery of new supplies and the invention of new technologies. Once economic growth slows down, prices of “now copiously supplied commodities fall”.

Accordingly, the current commodity cycle seems to have peaked in 2008. In June 2008, for example, the price of West Texas Intermediate crude oil peaked at $154 per barrel. By January 2016 it stood at $29 (both figures are in inflation-adjusted 2016 US dollars). The once-high price of oil has led to hydraulic fracturing, which has revolutionized the oil industry. Today, “fracking” continues to enable us to access previously inaccessible oil reserves in record volumes. In fact, humanity is yet to run out of a single “non-renewable” resource.

Unfortunately, many people, including Paul Ehrlich, and many organizations, including the Club of Rome, believe that the answer to scarcity is to limit consumption of natural resources. In reality, consumption limits are unpopular and difficult to enforce. More often than not, their effects fall hardest on the most vulnerable. A switch from fossil fuels to “renewable” sources of energy, for example, has increased the price of gas and electricity in many European countries to such extent that a new term – energy poverty – had to be coined.

According to the German magazine Der Spiegel, “Germany’s aggressive and reckless expansion of wind and solar power has come with a hefty price tag for consumers, and the costs often fall disproportionately on the poor.”  In democracies, such policies are, in the long run, unsustainable. More important is the fact that they are unnecessary because real solutions to future scarcity are more likely to come from innovation and technological change.

I do not mean to trivialize the challenges that humanity faces or imply that we will be able to solve all of the problems ahead. Instead, I want to suggest that the human brain, the ultimate resource, is capable of solving complex challenges. We have done so with disease, hunger, and extreme poverty, which have all fallen to historical lows, and we can do so with respect to the use of natural resources as well.