The FAMILY Act Costs 7x More than You Were Told

It seems likely the FAMILY Act will cost substantially more than advocates claim, either because estimates use erroneous assumptions or because the policy grows substantially over time.

A new report suggests that the Democrats’ FAMILY Act paid leave proposal is substantially more costly than previously estimated. The difference is meaningful: using more realistic assumptions, the cost of national paid leave is seven-fold greater than previous estimates, and taxpayers would be picking up the tab.

The American Action Forum analysis uses data from Cato’s paid family leave poll to estimate the cost of the FAMILY Act. Previously, assumptions used to model the cost of the program relied on the use of national unpaid leave benefit take-up rates (FMLA) or lesser-known, less generous, state-paid leave program take-up rates. Unfortunately, neither are good proxies for the likely use of a paid, nationally-known, and more generous FAMILY Act-like program.

The nationally representative Cato paid leave poll asked directly about respondent’s intended use of a FAMILY Act-like benefit. The take-up rate and benefit use duration for the FAMILY Act were substantially higher than previous estimates that relied on take-up rates for unpaid leave or lesser-known and less generous state programs.

Figure 1: Three Estimates of the Cost of the FAMILY Act 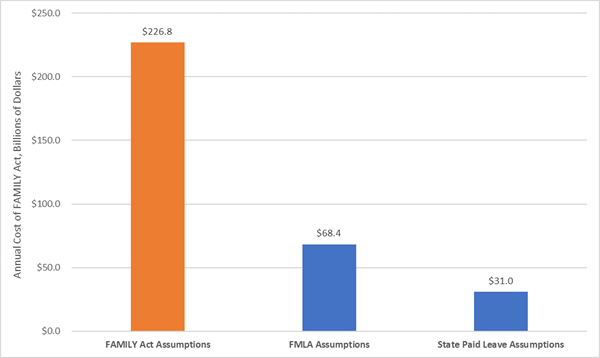 Using more realistic use assumptions, the FAMILY Act would cost seven-fold as much as previously estimated (Figure 1) and require a 2.85 percent payroll tax on workers. For an average worker, that means paid leave would cost $1,440 per year. This is substantially more expensive than previously claimed: elsewhere, advocates assert that the FAMILY Act would require a 0.2 percent payroll tax on workers at a cost of $75-95 annually.

Accurately forecasting the cost of paid leave is critical because Americans are price-sensitive. For example, when costs aren’t mentioned, 74 percent of Americans say they support national paid leave policy. But if paid leave costs workers $1,200 per year, a majority of Americans oppose paid leave.

It seems likely the FAMILY Act will cost substantially more than advocates claim, either because estimates use erroneous assumptions or because the policy grows substantially over time, as paid leave policies have elsewhere in the world. Either way, taxpayers deserve accurate information about the cost of paid leave before policymakers ask them to sign on the dotted line.

Vanessa Brown Calder is a policy analyst at the Cato Institute, where she focuses on social welfare, housing, and urban policy.