The EU Declares War on Supermarkets

The EU seems to view every problem with the marketplace, both real and imagined, to be evidence of a conspiracy against consumers and, therefore, should be regulated in some way.

With Britain leaving the European Union, the British will cease to contribute to the budgets of the institutions. This includes the CAP, the EU's Common Agricultural Policy, which allocates funding in the form of individual payments to producers. Over the last months, farmers on the continent have been very concerned about their subsidies which put the European Union's Commission, which proposes legislation, in a bit of an awkward position. Uneasy about the prospect of losing the popular support of farmers, the EU seeks to find new winning issues.

At the beginning of this past October, the Irish EU Commissioner for Agriculture and Rural Development, Phil Hogan, spoke at the Food Safety Authority in Dublin. During his speech, Hogan sympathized with the audience of farmers by stating that:

The imbalance of bargaining power between price setters and price takers is stark, leading to a situation where there is a real ‘fear factor’ for farmers of commercial retaliation, late payments and other headaches.

Hogans staff later tweeted this image from the account of the EU Agriculture Commission. 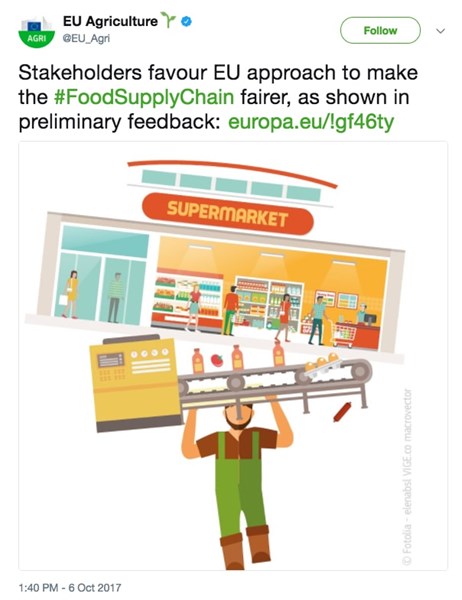 The Commissioner is, therefore, clearly taking the side of the lobbyists in the agricultural industry who seek to acquire regulatory advantages over the markets.

While agreements between producers aren't inherently reprehensible, it does produce an imbalance. Enabling Cartels

In the same month, EU governments and the European Parliament signed off on substantial changes to the Union’s Common Agricultural Policy. In the so-called “Omnibus talks,” the EU’s three main institutions, together with representatives of producers, agreed to grant essential privileges to farmers, most notably that of forming cartels. EU politicians claim that these cartels will be an effective counter to the bargaining power currently held by retailers. The new rules allow for the possibility of collectively negotiating value-sharing terms inside contracts.

This would mean that European farmers could agree on quantity caps in the production of milk in order to artificially increase prices. While agreements between producers aren't inherently reprehensible, it does produce an imbalance if one side – the producers – have the possibility to organize while the other side – the supermarkets – do not. As a result, it is consumers who will be hurt by these changes.

The suggestion that Barilla and Nestlé are conspiring with supermarkets to subjugate one part of Europe is absurd. Another instance in which the European Union is trying to score points with the electorate is that of "dual food quality." This is an argument brought forward by Central European nations such as the Czech Republic, Poland, and Slovakia. The leaders of these nations believe that retailers and food processors sell lower quality food in Central and Eastern Europe than they do in countries such as Germany or France.

Despite there being no evidence of companies conspiring against consumers in the East, their governments have been keen on making it an election issue. The European Union's Commissioner for Justice, Consumers, and Gender Equality, the Czech Věra Jourová, also called out companies on this issue and vowed to protect consumers. Jourová said in a video for social media that there will be no “second-class citizens in Europe.” The Commission is pledging €1 million to assist local food standard authorities to assess the situation.

Even the study that many Czech politicians point to, which was supposed to prove the existence of dual food quality, was not conclusive. Jan Pivoňka, from the University of Chemistry and Technology in Prague, who carried out the research, said that: “The aim of the research was not to show that there are more or less quality products in some countries. Criteria of quality is [sic] very subjective.” The researcher pointed to the fact that his study wasn’t there to prove that food in Central and Eastern Europe was of a worse quality.

It turns out that food processors happen to adapt their products to different tastes yet fail to mark the differences when the products appear in the store. In the same vein, your chili sauce might look the same when it's sold in Mexico, yet it's very likely that it will turn out to be considerably spicier. The suggestion that Barilla and Nestlé are conspiring together with supermarkets in order to subjugate one part of Europe is utterly absurd.

Why Are We Always Assuming the Worst?

It needs to be asked how long consumers are willing to put up with the EU's flagrant paternalism. Supermarkets and food processors are just the latest in a long list of enemies in the eyes of European regulators. It seems odd that once you follow EU policy proposals more regularly, you find that politicians aim at a different industry pretty much every week. In each case, they always assume that if the market appears to have some sort of a problem, then it must be the intentional wrong-doing of massive corporations. And while the intention of each measure seems to be ameliorating the situation for consumers, it very often does the opposite either by making one actor in the market more powerful and therefore distorting competition or by blatantly taking choices away from consumers by banning or taxing their products.

It needs to be asked how long consumers are willing to put up with the EU's flagrant paternalism which is steeped in the idea that individuals are basically unable to make informed decisions about their own lives. How long until we recognize that problems in the marketplace mostly arise out of too much regulation and not too little and that only more competition will provide the consumers with the choices they need and want? Because when the last Coke is taxed, the last bread over-regulated, and the last cigarette banned, we might finally notice that we've gone too far.