The Dystopian Novel that Foresaw the Nightmares of Socialism

Decades before the socialists gained power, Eugene Richter saw the writing on the wall. 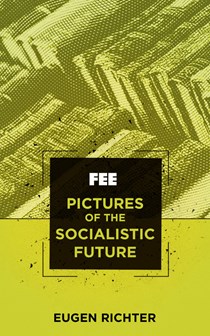 In the mid-nineteenth century, a new political movement arose: socialism. Germany was its epicenter. The German Karl Marx was its leading thinker, and the Social Democratic Party of Germany its leading organization. The socialists denounced capitalist inequality and argued that the obvious solution was government ownership of the means of production.

From the outset, many questioned the practicality of the socialists’ solution. After you equalize incomes, who will take out the garbage? Yet almost no one questioned the socialists’ idealism. By 1961, however, the descendants of the radical wing of the Social Democratic Party had built the Berlin Wall—and were shooting anyone who tried to flee their “workers’ paradise.” A movement founded to liberate the worker turned its guns on the very people it vowed to save.

Who could have foreseen such a mythic transformation? Out of all the critics of socialism, one stands out as uniquely prescient: Eugene Richter (1838–1906).[1] During the last decades of the nineteenth century, he was the leading libertarian in the German Reichstag, as well as the chief editor of the Freisinnige Zeitung. Seventy years before the Wall, Richter’s dystopian novel, Pictures of the Socialistic Future, boldly predicted that victorious German socialism would inspire a mass exodus—and that the socialists would respond by banning emigration, and punishing violators with deadly force.

Useful people, and people who had really learnt something, went away in ever-increasing numbers to Switzerland, to England, to America, in which countries Socialism has not succeeded in getting itself established. Architects, engineers, chemists, doctors, teachers, managers of works and mills, and all kinds of skilled workmen, emigrated in shoals. The main cause of this would appear to be a certain exaltation of mind which is greatly to be regretted. These people imagine themselves to be something better, and they cannot bear the thought of getting only the same guerdon as the simple honest day laborer.

A decree has been issued against all emigration without the permission of the authorities.… Old persons who are beyond work, and infants, are at liberty to go away, but the right to emigrate cannot be conceded to robust people who are under obligations to the State for their education and culture, so long as they are of working age.

Under these circumstances the Government is to be commended for stringently carrying out its measures to prevent emigration. In order to do so all the more effectually, it has been deemed expedient to send strong bodies of troops to the frontiers, and to the seaport towns. The frontiers towards Switzerland have received especial attention from the authorities. It is announced that the standing army will be increased by many battalions of infantry and squadrons of cavalry. The frontier patrols have strict instructions to unceremoniously shoot down all fugitives.

Lord Acton and F.A. Hayek have inspired the two most popular explanations for the crimes of actually existing socialism. While Acton never lived to see socialists gain power, their behavior seems to perfectly illustrate his aphorism that “power tends to corrupt, and absolute power corrupts absolutely.”[2] For all their idealism, even socialists will do bad things if left unchecked. Hayek, with the benefit of hindsight, suggested a slightly different explanation: under socialism, “the worst get on top.”[3] On this theory, the idealistic founders of socialism were gradually pushed out by brutal cynics as their movement’s power increased.

The great tragedy of the twentieth century is that the world had to learn about totalitarian socialism from bitter experience, instead of Richter’s inspired novel.

Richter’s novel advances a very different explanation for socialism’s “moral decay”: the movement was born bad. While the early socialists were indeed “idealists,” their ideal was totalitarianism. Their overriding goals were to engineer a new society and a New Socialist Man. If this meant treating workers like slaves—depriving them of the freedom to choose their occupation or location, forbidding them to quit, splitting up families without their consent, and imposing draconian punishments on malcontents—so be it.

Richter admittedly presents some of the socialists’ uglier policies—increased work hours, stringent rationing, massive military spending, corporal punishment—as slippery-slope responses to deteriorating conditions. But many of their worst offenses happen early in the novel, and Mr. Schmidt, the book’s socialist narrator, happily supports them. In chapter 6, workers lose the freedom to choose their line of work. Schmidt’s reaction:

What has the Government to do in order to bring their scheme for organizing production and consumption into some sort of harmony with the entries made by the people? Should Government attempt a settlement by fixing a lower rate of wages for those branches which showed any over-crowding, and a higher rate for those labors which were not so coveted? This would be a subversion of the fundamental principles of Socialism.

In chapter 7, the government imposes internal passports to prevent farmers from moving to the greater comfort of the city. Schmidt’s reaction:

It would unquestionably have been better if those regulations which have only just been issued had been issued at the very first. According to these regulations no one can now temporarily leave his place of residence without first providing himself with a leave-of-absence ticket; and no one can make a permanent removal without receiving such directions from higher quarters.

Socialism is founded upon the principle that it is the duty of all persons alike to labor, just as under the old regime the duty to become a soldier was a universally recognized one. And just as in the old days young men who were ripe for military service were never allowed to emigrate without authority, so can our Government similarly not permit the emigration from our shores of such persons as are of the right age to labor.

What inspired Richter to make these grim—yet uncannily accurate—predictions about the “socialistic future”? The most plausible hypothesis is that Richter personally knew the leading socialists from the German Reichstag, and saw them for what they were.[4] I submit that he repeatedly peppered the socialists with unpleasant hypotheticals, from “Under socialism, who will take out the garbage?” to “What will you do if skilled workers flee the country?” When socialist politicians responded with hysteria and evasion, Richter drew the natural inference: “If this is how these ‘idealists’ deal with critical questions before they have power, just imagine how they’ll deal with critical actions after they have power!” As Richter’s proxy explains in the novel’s climactic speech,

In endeavoring to get rid of the disadvantages of the socialistic method of manufacture, you place such restrictions on the freedom of the person, and of commerce, that you turn Germany into one gigantic prison.… To those in jail there was, at least, the possibility of an act of pardon, which might some day open a path to liberty, even to those who had been condemned to life-long imprisonment. But those who are handed over to your socialistic prison are sentenced for life without hope of escape; the only escape thence is suicide.

Despite their intuitive appeal, the Actonian “power corrupts” and Hayekian “worst get on top” theories of socialist moral decay seem inferior to Richter’s “born bad” account. Power does indeed lead politicians to betray their ideals, but from the standpoint of nineteenth-century socialism, the real “sellouts” were the moderate Social Democrats who gradually made peace with the capitalist system. The worst do indeed get on top in totalitarian regimes. But if the early socialists had not intellectually justified extreme brutality, their movement probably wouldn’t have attracted the many sadists and sociopaths who came to run it. Only the Richterian theory can readily explain why the most devoted surviving child of German socialism grew up to be the prison state of East Germany: self-righteous brutality was the purists’ plan all along.

Decades before the socialists gained power, Eugene Richter saw the writing on the wall. The great tragedy of the twentieth century is that the world had to learn about totalitarian socialism from bitter experience, instead of Richter’s inspired novel. Many failed to see the truth until the Berlin Wall went up. By then, alas, it was too late.

[4] Bismarck’s Anti-Socialist Laws (1878–90) made life difficult for the Social Democratic Party of Germany, but never imposed an outright ban. The party bottomed out at nine seats in the Reichstag in 1878—and jumped up to thirty-five in 1890 when the Anti-Socialist Laws lapsed.