The Best Fantasy Has Roots in History

We really like a healthy dose of realism and the familiar in our escapist fiction.

This week I came across a popular Reddit thread exploring how Game of Thrones author George R.R. Martin created his fictional land of Westeros. 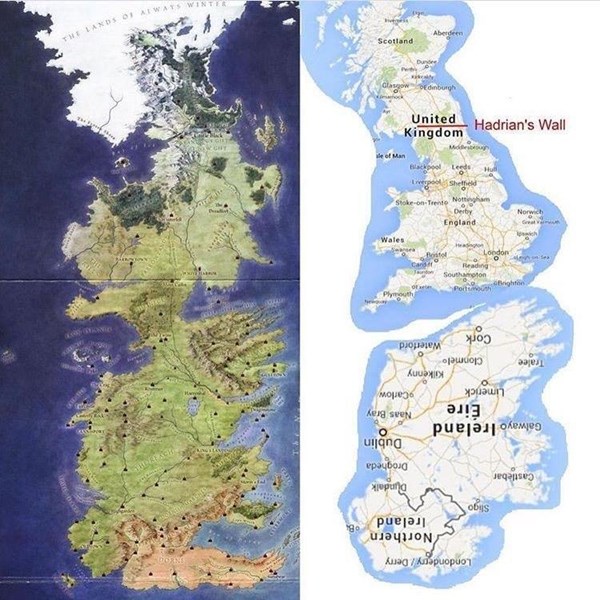 Landmass shape isn’t the only thing Martin borrowed from the British Isles. The whole history and characterization of the book/show bears strong impressions from England’s War of the Roses. These similarities lend the story a remarkable sense of realism and depth that you might normally find in one of Shakespeare’s histories.

This set me to thinking. The best fantasy I’ve read – the kind that really sticks with me – feels like it was deliberately made to be like our world.

The many nations and cultures of Robert Jordan’s Wheel of Time are curious but obvious remixes of different cultural periods of our world. The Lord of the Rings’saccount of hobbits ties itself to the pre-history of the pre-history of man. The Chronicles of Narnia embeds itself within a medieval worldview and classical mythology, albeit with talking animals, that parallels many of the practices and beliefs of our own.

If these stories – some of the most well-regarded fantasy writing of all time – root themselves in history, then we had better notice why.

It turns out that we need familiarity in our most escapist fiction. And we need to believe (or be reminded) that the fantastic is not so distant from our history and our experience.

Fantasy doesn’t, after all, help us escape our world. It takes us more deeply into it. I doubt very much if it is possible to create a really successful fantasy story in America or Europe that does not have some medieval elements. The Middle Ages are the prehistory of the West. Our founding myths are myths of knights and saints – the individualistic hero tales of good vs. evil, dragons and holy men. Similarly, successful fantasy in a place like Japan will likely hearken back to the samurai age.

If we lived at a different time and a different place, the archetypes we use might look different. But they would be consistent with what made up our culture and with the same struggles that affect us.

You’ll rarely find a fantasy story so different and distant from human history that really succeeds in embedding itself in our memories. You won’t find people lining up for a fantasy based in a world without swords, or even one based in our own world a hundred years from now. You might have science fiction, but you would not have a good fantasy or a memorable one.