Half of the revenue lost because of the lower corporate rate is recovered thanks to additional economic activity.

Yesterday was “Australia Day,” which I gather for Aussies is sort of like the 4th of July for Americans.

To belatedly celebrate for our friends Down Under, I suppose we could sing Waltzing Matilda. 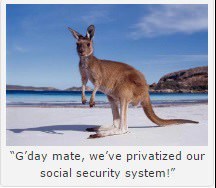 But since I’m a policy wonk with a special fondness for the nation, let’s instead acknowledge Australia Day by citing some very interesting research.

Economists at the Australian Treasury crunched the numbers and estimated the economic effects of a lower corporate tax rate. They had several levers in their model for how this change could be financed, including increases in other taxes.

Corporate income taxes are one of the most destructive ways for a government to generate revenue, so it’s not surprising that the study concluded that a lower rate would be desirable under just about any circumstance.

But what caught my attention was the section that looked at the economic impact of a lower corporate tax rate that is offset by a reduction in the burden of government spending. The consequences are very positive.

This subsection reports the findings from the model simulation of a company income tax rate cut from 30 to 25 percent, leaving all other tax rates unchanged and assuming any shortfall in revenue across all jurisdictions is financed by a cut in government spending … Under this scenario, GNI is expected to rise by 0.7 percent in the long run (see Chart 9) … the improvement in real GNI is largely due to the gain in labor income. Underlying the gain in COE is an estimated rise in before-tax real wages of around 1.1 percent and a rise in employment of 0.1 percent.

For readers unfamiliar with economic jargon, GNI is gross national income and COE is compensation of employees.

And here’s the chart that was referenced. Note that workers (labor income) actually get more benefit from the lower corporate rate than investors (capital income). 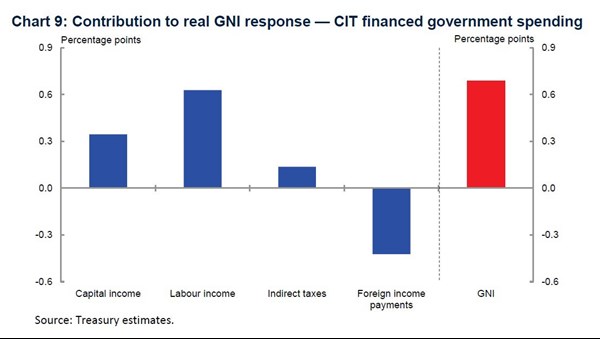 So the bottom line is that a lower corporate tax rate leads to more economic output, with workers enjoying higher incomes.

And higher output and increased income also mean more taxable income. And this larger “tax base” means that there is a Laffer Curve impact on tax revenues.

No, the lower corporate tax rate isn’t self-financing. That only happens in rare circumstances.

But the study notes that about half of the revenue lost because of the lower corporate rate is recovered thanks to additional economic activity. 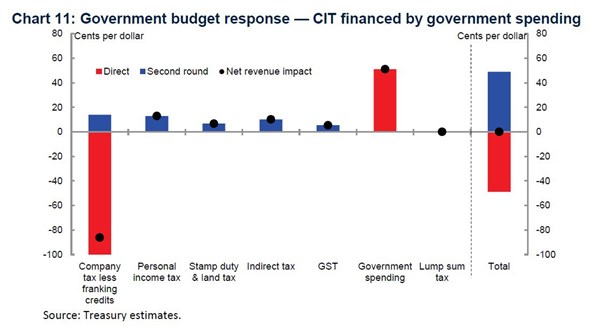 And the study specifically notes that the economic benefits of a lower corporate rate are largest when it is accompanied by less government spending.

A decrease in the company income tax rate financed by lower government spending implies a significantly higher overall welfare gain when compared with the previous scenarios of around 0.7 percentage points … As anticipated in the theoretical discussion, when viewed from the standpoint of the notional owners of the factors of production, the welfare gain is largely due to a significant improvement in labor income due to higher after-tax real wages.

By the way, the paper does speculate whether the benefits (of a lower corporate rate financed in part by less government spending) are overstated because they don’t capture benefits that might theoretically be generated by government spending. That’s a possibility, to be sure.

But it’s far more likely that the benefits are understated because government spending generates negative macroeconomic and microeconomic effects.

In the conclusion, the report sensibly points out that higher productivity is the way to increase higher living standards. And if that’s the goal, a lower corporate tax rate is a very good recipe.

Australia’s terms of trade, labor force participation, and population growth are expected to be flat or declining in the foreseeable future, which implies any improvement in Australia’s living standards must be driven by a higher level of labor productivity. This paper shows that a company income tax cut can do that, even after allowing for increases in other taxes or cutting government spending to recover lost revenue, by lowering the before-tax cost of capital. This encourages investment, which in turn increases the capital stock and labor productivity.

This is spot on. A punitive corporate income tax is a very destructive way of generating revenue for government.

Which is why I hope American policy makers pay attention to this research. We already have the highest corporate tax rate in the developed world (arguably the entire world depending on how some severance taxes in poor nations are counted), and we magnify the damage with onerous rules that further undermine competitiveness.

P.S. By world standards, Australia has a lot of economic freedom. But that’s in part a sad indictment on the global paucity of market-oriented nations. There are some very good policies Down Under, but the fiscal burden of government is far too large. The current government is taking some small steps in the right direction (lower corporate rate, decentralization), but much more is needed.

P.P.S. In the interest of being a good neighbor, the Australian government should immediately put an end to its crazy effort to force Vanuatu to adopt an income tax.