The Alt-Right Origins of Progressive Economics

In When Economics was Radical Marshall Steinbaum and Bernard Weisberger lament that the American Economic Association is no longer a radical, progressive force.

The AEA had been conceived as an upstart challenge to classical economic orthodoxy. Its founding platform stated, “We regard the state as an educational and ethical agency whose positive aid is an indispensable condition of human progress”

..But the AEA’s radicalism would be smothered soon after its birth…[and it] retreated to the safer ground of nonpartisan neutrality as the hallmark of professionalism. That move away from radicalism ensured that some of the most controversial questions in the field would never be answered convincingly, at least not by economists.

Steinbaum and Weisberger are correct about the AEA’s founding but they do the readers of the Chronicle of Higher Education a disservice by not revealing that Ely’s “radicalism” consisted of socialism with a capitalist veneer, racism, and eugenics (although they do discuss some of these views elsewhere). Ely, of course, wanted more government ownership of the commanding heights, more regulation of economic life and more militarism and service to the state. Ely didn’t just reject laissez-faire in economics; he rejected laissez-faire in all areas of social life.

For example, after explaining why the benevolence of modern society might lead to a decline in the fitness of the race, he argued, don’t worry, we have a solution:

….the regulation of marriage, which is proposed, and which is being pushed forward by physicians and thoughtful people, — by people who are the farthest removed from any possible designation as cranks, — looks beyond the prevention of the marriage of paupers and feeble-minded.

“The Commission should provide for physical examination of all desiring to marry. This would include their racial tendencies, moral, mental, and physical condition, whether they are of sound mind, free from chronic deadly diseases, and not moral degenerates. If the several governments would devote a little attention to this subject for a few years, two generations would see a different people on this earth. It is a radical but sound idea.”

The problem is to keep the most unfit from reproduction, and to encourage the reproduction of those who are really the superior members of society.

You won’t be surprised to learn that Ely had clear ideas of who was fit and who unfit:

…there are classes in every modern community composed of those who are virtually children, and who require paternal and fostering care, the aim of which should be the highest development of which they are capable. We may instance the negroes, who are for the most part grownup children, and should be treated as such. 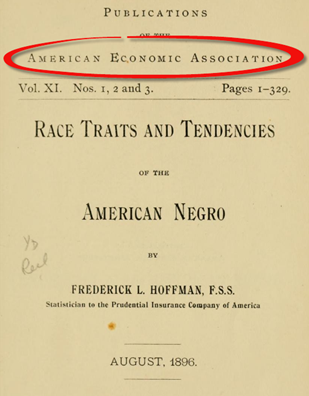 Moreover, this was not a side issue to the founding of the AEA; this was exactly the radicalism that Ely’s AEA promoted. One early and influential publication of the AEA, for example, was Frederick Hoffman’s Race Traits of the American Negro which after presenting reams of statistics (Hoffman was later a president of the American Statistical Society) concluded with these recommendations:

…Intercourse with the white race must absolutely cease and race purity must be insisted upon in marriage as well as outside of it. Together with a higher morality will come a greater degree of economic efficiency, and the predominating trait of the white race, the virtue of thrift, will follow as a natural consequence of the mastery by the colored race of its own conditions of life.

…All the facts brought together in this work prove that the colored population is gradually parting with the virtues and the moderate degree of economic efficiency developed under the regime of slavery. All the facts prove that a low standard of sexual morality is the main and underlying cause of the low and anti-social condition of the race at the present time. All the facts prove that education, philanthropy and religion have failed to develop a higher appreciation of the stern and uncompromising virtues of the Aryan race. The conclusion is warranted that it is merely a question of time when the actual downward course, that is, a decrease in the population, will take place. In the meantime, however, the presence of the colored population is a serious hindrance to the economic progress of the white race.

The fullest unfolding of our national faculties, Ely asserted, required “the exclusion of discordant elements–like, for example, the Chinese.” Ely assumed that a unified American nation required racial homogeneity. As for South Asians, Ely proposed that famine-relief efforts in India should be suspended. Why not, Ely ventured, “let the famine continue for the sake of race improvement?”

If Ely was a progressive fascist and I said “but he beat his wife” that would not discredit progressive fascism. The point, however, is that the very factors that Steinbaum and Weisberger praise, the radicalism of the early AEA and Ely’s rejection of laissez-faire, are precisely the factors that led Ely to support industrial policy, racism and eugenics. To Ely property was a bundle of rights and no stick in that bundle was inherently more valuable than the others. If it’s ok to take a person’s property then it’s ok to take a person’s property full stop whether that be physical goods, the right to procreate, the right to associate, the right to speak and so forth.

Ely was clear that industrial policy is human capital policy (perhaps even truer today than in Ely’s time) and he stated the connection between the two types of regulation, writing:

We have our census of farm animals, we have our soils surveys. Is it not of the highest importance that we should have constantly going on a survey of our human resources ? We then shall learn to know what kind of human beings we have as citizens and potential citizens. We shall then know where defects exist and we shall learn how to apply suitable remedies.

…heredity is a force which sets limits to all our activities, and which, if entirely neglected, leads to decay and ruin in the nation. We have got far enough to recognize that there are certain human beings who are absolutely unfit and who should be prevented from a continuation of their kind. We do know it is important that a superior stock should not be swallowed up and lost by a more rapid increase of the inferior stock.

Ely’s views are perhaps most closely aligned today with the so-called alt-right. It’s not a connection that the AEA should be pleased to acknowledge, let alone repeat.