The Absurdity of Political Correctness Has Reached New Heights

The bizarre results of PC culture aren't limited to the US. This is a global epidemic.

A few years ago, I put together an amusing collection of stories comparing truly bizarre examples of political correctness and bureaucratic idiocy in the United States and United Kingdom.

I was especially impressed (in a you-must-be-joking fashion) that a British job placement office got in trouble for discrimination because they sought “reliable” and “hard-working” applicants. Sounds impossible to believe, but consider the fact that the EEOC bureaucracy in the U.S. went after a trucking company because it didn’t want to employ drunk drivers.

And I’ve shared jaw-dropping reports of anti-gun political correctness in American schools, as well as a proposal to ban skinny models in Britain.

Let’s expand on this collection of horror stories.

Reason reports that some bureaucrats in New York City think that it is sexual harassment for a professor to base grades in part on effort and classroom behavior.

A professor at the City University of New York’s Brooklyn College was ordered to make changes to his syllabus because it amounted to sexual harassment. The professor, David Seidemann has refused to comply, and for good reason. …a university administrator expressed three grievances about the syllabus. First, and most quizzically, the grading portion of the syllabus suggests sexual harassment. It reads, “Class deportment, effort etc……. 10% (applied only to select students when appropriate).” …Seidemann told me in an email that his department chair said “the 10% section could be construed as a prelude to sexual harassment,” and had to be changed at once. This order apparently came from the Director of Diversity Investigations and Title IX Enforcement. In the course of Seidemann’s interactions with the director, he realized something quite stunning: there was no record of anyone actually complaining about the syllabus. The university had apparently launched this investigation on its own. …The professor refused to meet with the Director of Diversity Investigations, preferring to talk via email so that the conversation could be documented. This eventually caused the director to abandon the investigation: the matter is now officially closed, according to Seidemann. The professor is pleased with the result, but little else.

If you read the entire story, it appears that the bureaucrats decided that “effort” could be interpreted as an invitation for female students to trade sex for higher grades. At least I think that’s the implication.

The British have similarly brainless people, though they express their political correctness in non-sexual ways such as banning running on the playground.

In which case, there must have been rampant sexual harassment when I was young because our report cards in elementary school always included our teachers’ assessment of our “effort.” And all the way through college, I periodically had classes in which grades were based in part on “participation.”

I guess I was so young and naive that I didn’t realize my teachers and professors were inviting me to offer sex for grades (my grades often were low enough that it was probably best I didn’t run the risk of having them go even lower).

More seriously, I’m glad the professor stood up against the absurd accusations put forth by the diversity bureaucrats. I especially like that he insisted on having everything occur via email so he couldn’t be victimized by the selective memory of some pencil pushers who probably try to justify their comfortable sinecures by claiming an occasional scalp.

Bureaucrats in Knoxville, Tennessee, also seem to be amazingly skilled at seeing sexual harassment where it doesn’t exist.

The student, Keaton Wahlbon, had to take a geology quiz featuring the following question: “What is your lab instructor’s name? (if you don’t remember, make something good up).” Wahlbon followed the instructions: he didn’t remember, so wrote down the first generic girl name that came to mind—Sarah Jackson. Unbeknowst to Wahlbon, Sarah Jackson is a real person: a pornographic model. Of course, there are hundreds (thousands?) of other Sarah Jacksons in the world, and Wahlbon had no idea that his lab instructor would interpret his answer in such a specific and malicious manner. His answer was marked “inappropriate” and he received a grade of zero on the quiz. Wahlbon appealed to his professor, Bill Deane, but Deane maintained that Wahlbon had committed sexual harassment. Wahlbon contacted the head of department because, well, that’s nonsense. …no resolution has been reached yet. But according to The Knoxville News Sentinel, the university is now investigating the matter as if a complaint had been filed—even though no one has taken such an action.

Wow, this is surreal. Let’s assume, for the sake of argument, that Mr. Wahlbon was thinking of the pornographic model when he wrote “Sarah Jackson” on the quiz. How is this sexual harassment? I don’t claim to be an expert on such matters, but I’m under the impression that harassment occurs when someone with power in a relationship makes some sort of sexual advance (or even tells a dirty joke). So how can a student harass a teacher? Or even a teacher’s lab instructor?

By the way, the British have similarly brainless people in their nation.

Though they express their political correctness in non-sexual ways (what a surprise), such as the principal who has banned running on the playground.

The headmaster of Hillfort Primary School in Liskeard, Dr Tim Cook, introduced the ban to prevent the little blighters injuring themselves. Instead, kids at Hillfort can blow off steam at playtime by playing with Lego, Jenga, and even dancing, as part of the school’s plan to reduce ‘negative behaviours’. Cook has responded by reassuring parents that their children are not completely prohibited from running – they are just not allowed to run across the playground. Have the nippers been given a small area to run around instead? Getting dizzier and dizzier as they charge about in circles? …Arguing that the ban is for safety reasons is pathetic. It’s running, not sword-swallowing. Grazed knees are part of growing up, and do not, or at least should not, result in lawsuits.

Fortunately, British parents seem a bit more sensible than their bureaucratic overlords. They’re petitioning to allow their kids to…gasp…do more than walk on the playground during recess.

There’s also lunacy in Australia. And since I’m a parent, I’m especially horrified about what happened to a father who wanted to protect his stepdaughter from sexting.

A man who found out that his 15-year-old stepdaughter was sexting her boyfriend proceeded to download the evidence to bring it to the school and the police to ask them to intervene. …Intervene they did. Now the dad has been convicted on child pornography charges and placed on the sex offender registry. This, despite the judge understanding exactly why the man, Ashan Ortell, 57, held onto the images. “There is no suggestion of any exploitation of them by anybody,” ruled Judge Jane Patrick, over in Australia, which is becoming as daffy as the United States. “You made no attempt to conceal the images. In fact, you were so concerned that you contacted the authorities about the images.”

If you read the entire story, I’m guessing that the cops went after the dad because he was badgering them for not doing anything about his stepdaughter. And I sympathize with the cops for choosing not to make a big deal out of two teenagers sexting, but did they really have to go after the guy for having the images when nobody thinks he had any unsavory intent or motives?

Keep in mind that this took place in the nation that awarded workers compensation to a woman who injured herself while having sex and also threatened fines against companies that pointed out the downside of a carbon tax.

All that being said, Australia is still my top choice for where to go if (when?) America suffers a Greek-style fiscal and economic collapse.

P.S. I’ve come across lots of crazy government decisions in my time, so I’m not surprised by today’s material. Though since I mentioned Greece, that government deserves some sort of prize for subsidizing pedophiles and demanding stool samples before letting entrepreneurs set up online companies. 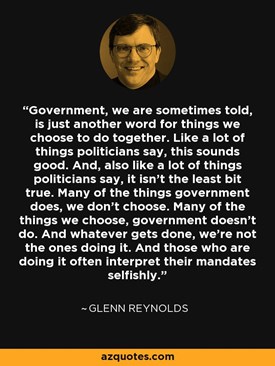 And let’s not forget that European courts that have ruled that there’s an entitlement to free soccer broadcasts and a right to satellite TV. About as nutty as the Finnish court that ruled there’s a right to broadband access, and as crazy as the Bolivian decision that there’s a human right to receive stolen property.

P.P.S. In his speech to the 2008 Democratic Convention, former Massachusetts Governor Deval Patrick said “Government, as Barney Frank likes to say, is simply the name we give to the things we choose to do together.”

If that’s true, then the above examples show that we “choose” to do some really foolish things. In reality, as Glenn Reynolds of Instapundit reminds us, we don’t choose. That’s why this poster contains a much more accurate assessment of what really happens when government gets involved.