So-called tax havens should be applauded, not criticized.

While my colleagues are stuck in the cold of Washington for inauguration week, I’m enjoying a few days in the Caribbean. More specifically, I’m sharing my views today on Trump and the global economy at the annual Business Outlook Conference in the British Virgin Islands.

Yes, another example of the sacrifices I make in the battle for liberty.

But it’s fortuitous that I’m here for reasons other than the weather. This is a good opportunity to expose Oxfam. Many people have a vague impression that this group is a well-meaning charity that seeks to help lift up poor people.

If you take a close look at the organization’s activities, however, you’ll see that it’s become a left-wing pressure group.

Consider, for example, Oxfam’s recent report on “Tax Battles,” which discusses the supposed “dangerous global race to the bottom on corporate tax.”

Based on Oxfam’s ideologically driven agenda, Bermuda and the Cayman Islands are the worst of the worst, followed by the Netherlands, Switzerland, and Singapore. The British Virgin Islands, meanwhile, is number 15 on Oxfam’s list. 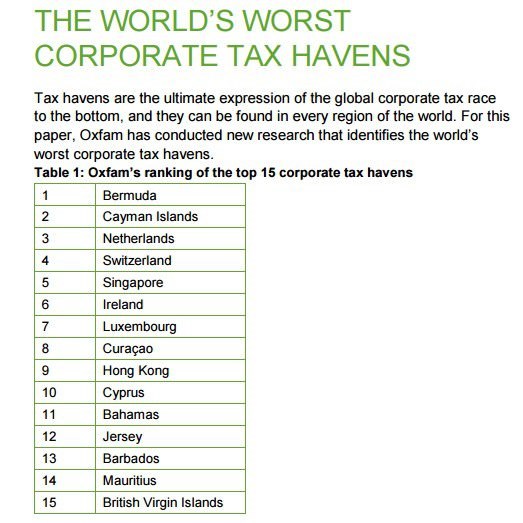 And what awful sins did BVI and the other jurisdictions commit to get on the list?

Well, the report suggests that they're guilty of helping taxpayers minimize their tax burdens.

To create the list, Oxfam researchers assessed countries against a set of criteria that measured the extent to which countries used three types of harmful tax policies: corporate tax rates, the tax incentives offered, and lack of cooperation with international efforts against tax avoidance.

In other words, places with good business tax policy are ostensibly bad because politicians have less money to waste.

By the way, the folks at Oxfam are grotesquely hypocritical.

The world’s most important jurisdiction for corporate tax planning is Delaware and it didn’t even appear on the list. Why? I have no idea.

But I can tell you that there is a single building in Delaware that is home to 285,000 companies according to a report in the New York Times.

1209 North Orange Street… It’s a humdrum office building, a low-slung affair with a faded awning and a view of a parking garage. Hardly worth a second glance. If a first one. But behind its doors is one of the most remarkable corporate collections in the world: 1209 North Orange, you see, is the legal address of no fewer than 285,000 separate businesses. Its occupants, on paper, include giants like American Airlines, Apple, Bank of America, Berkshire Hathaway, Cargill, Coca-Cola, Ford, General Electric, Google, JPMorgan Chase, and Wal-Mart. These companies do business across the nation and around the world. Here at 1209 North Orange, they simply have a dropbox. …Big corporations, small-time businesses, rogues, scoundrels and worse — all have turned up at Delaware addresses in hopes of minimizing taxes, skirting regulations, plying friendly courts or, when needed, covering their tracks. …It’s easy to set up shell companies here, no questions asked.

But Oxfam’s people are either spectacularly clueless or they made some sort of bizarre political calculation to give America a free pass.

For purposes of today’s discussion, however, what matters most is that Oxfam is ideologically hostile to jurisdictions with good policy. The fact that they’re also hypocritical is just icing on the cake.

By the way, putting out shoddy reports is a pattern for the organization.

It recently got a lot of press attention because of a report on “An Economy for the 99 Percent” with the dramatic claim that the world’s 8-richest people have the same wealth as the world’s bottom-50 percent.

Oxfam wants people to somehow conclude that billions of people are poor because those 8 people are rich. But that’s nonsense.

Here are two very clever tweets on the topic.

And here’s a tweet noting that the classical liberal policies opposed by Oxfam have led to a much better world. 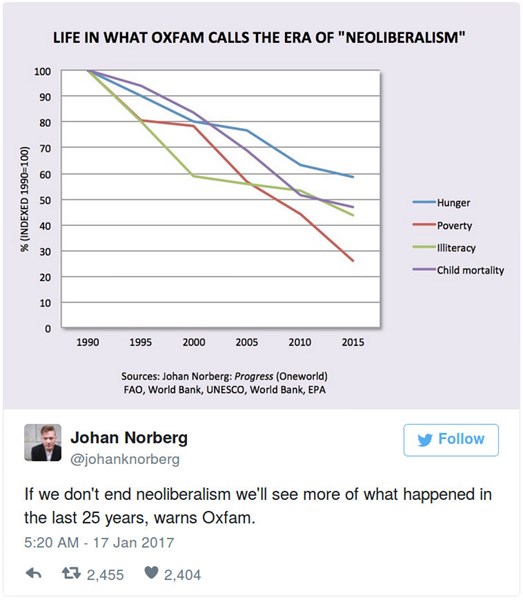 And here’s one of his “Dead Wrong” videos on the topic of inequality and poverty.

And since we’re looking at videos, here’s my video on Obama’s anti-tax haven demagoguery.

The moral of the story is that BVI (and other so-called tax havens) should be applauded, not criticized.

And Oxfam should end the pretense of being a charity. It’s a left-wing hack organization.